Art and printing are linked intrinsically.

Whether we’re talking about illustrated books, magazines, posters or canvases, there is a strong connection between the two worlds, one which dates back to time immemorial.

Sophia Lewis’ artistic creations are proof that this union is not only surviving, but thriving,and ready to forge new paths. Sophia decided to create an art exhibition that pushes the boundaries of the concept of photography, challenging the image and its usual boundaries and entrusting her work to digital printing and a non-standard material: plexiglass. She wanted to push herself to her limits, in order to give new vitality and substance to the image.

The result is truly striking. We asked Sophia to tell us where her bold idea came from and how she turned it into reality using our printing services.

Ready for a virtual tour? 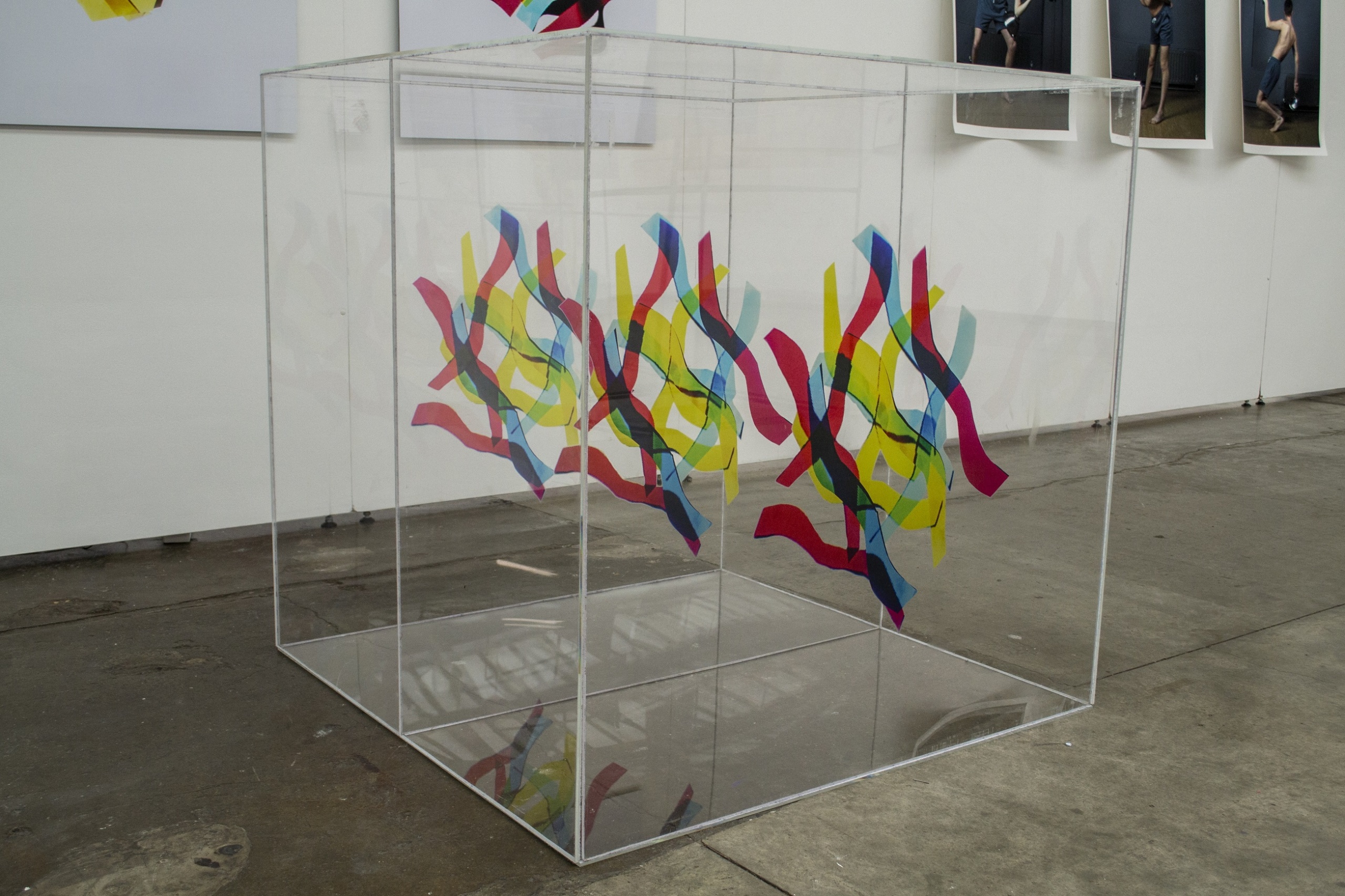 Who are you? Tell us about yourself, what you get up to in life, and your dreams, aspirations and talents. A short but faithful portrait!

Hello! I’m a recent graduate from Arts University Bournemouth and am based in Dorset, UK. I studied BA (Hons) Photography, achieving First Class Honours, and before that I studied a one-year Foundation course in Art and Design. My interest in photography started from a young age, when my constant use of my parents’ camera led them to buy me a simple little digital camera of my own aged 10. I’ve always been drawn to art and creativity in general, and my immediate goal for the future is to find a career path that lets me pursue my creative interests, so as to one day be able to fully fund myself as an art practitioner.

Before telling us how your idea was born, can you explain to our readers what you produced in the end using our printing services?

Sure thing. For the outcome of my final project at university, I created two prints and a metre sized cube from plexiglass sheets, with three of these sheets printed with abstract photographic imagery that I had been creating for this project. I used Pixartprinting for these printed plexiglass sheets, as they offered a very easy to use online ordering service, as well as being able to print at the scale I desired. The work we’ll be discussing here will focus on the plexiglass cube. 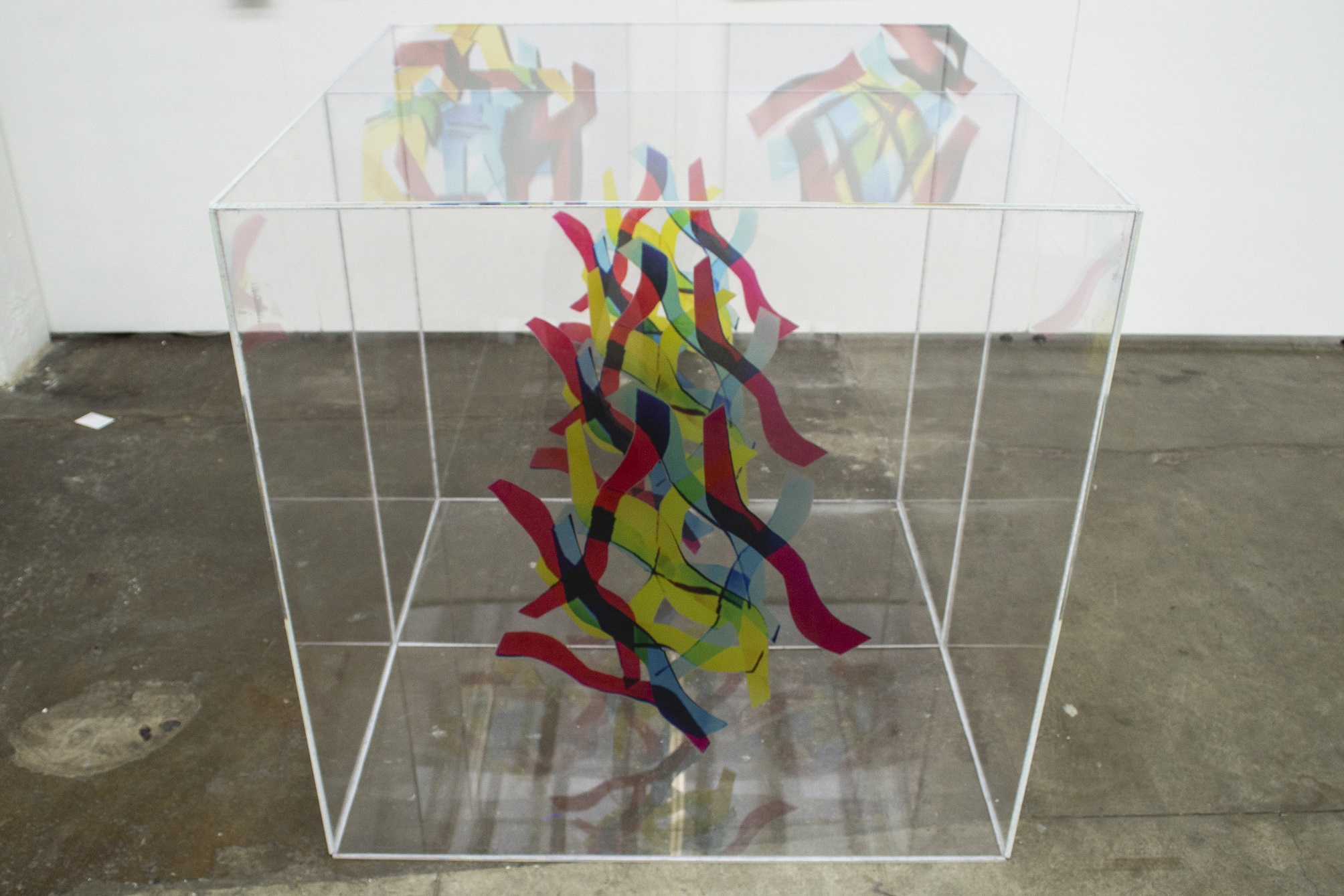 Let’s go back to the moment it all began. When did you come up with the idea for this design? Did you stumble across it by chance? Tell us a bit about how you devised the concept.

As mentioned above, for this final project at university I had been developing a body of abstract photographic imagery that I called “Constructs”. Within this, I was exploring the collapse of medium specificity within the digital realm, so my purpose with this body of work was to push at the notion of what can be considered photographic imagery.

The technique I used for creating this imagery involved a repetitive projection technique. To explain this simply, I used strips of paper stuck onto a blank wall, which I photographed, and then projected said photograph back onto the wall, with the paper still stuck on there. I then took another image and so on. I used a repeated motif of primary colours during the experimentational phase of the project, combining this with simple shapes made of paper; the idea here being the development of a composition from simple elements. After much experimentation and refinement, I settled on three “final” images. I experimented with printing on both photographic paper and acetate. The experiments with acetate led me to further explore the idea of printing of transparent materials.

I wanted the final outcome to reflect both the two and three-dimensional elements that had been involved in the actual creation of the imagery. This desire led me to consider having two printed images and then a third image being sculptural. Developing from the use of acetate, I decided to explore printing on a more “solid” material, which led me to printing on plexiglass. The cube idea came about by chance, when I was looking at those transparent glass cubes that hold images in. I thought to myself, wouldn’t it look interesting if I could somehow get image into a cube? Thinking about this idea over a few days, I found myself really drawn as to what a cube with my imagery would look like. 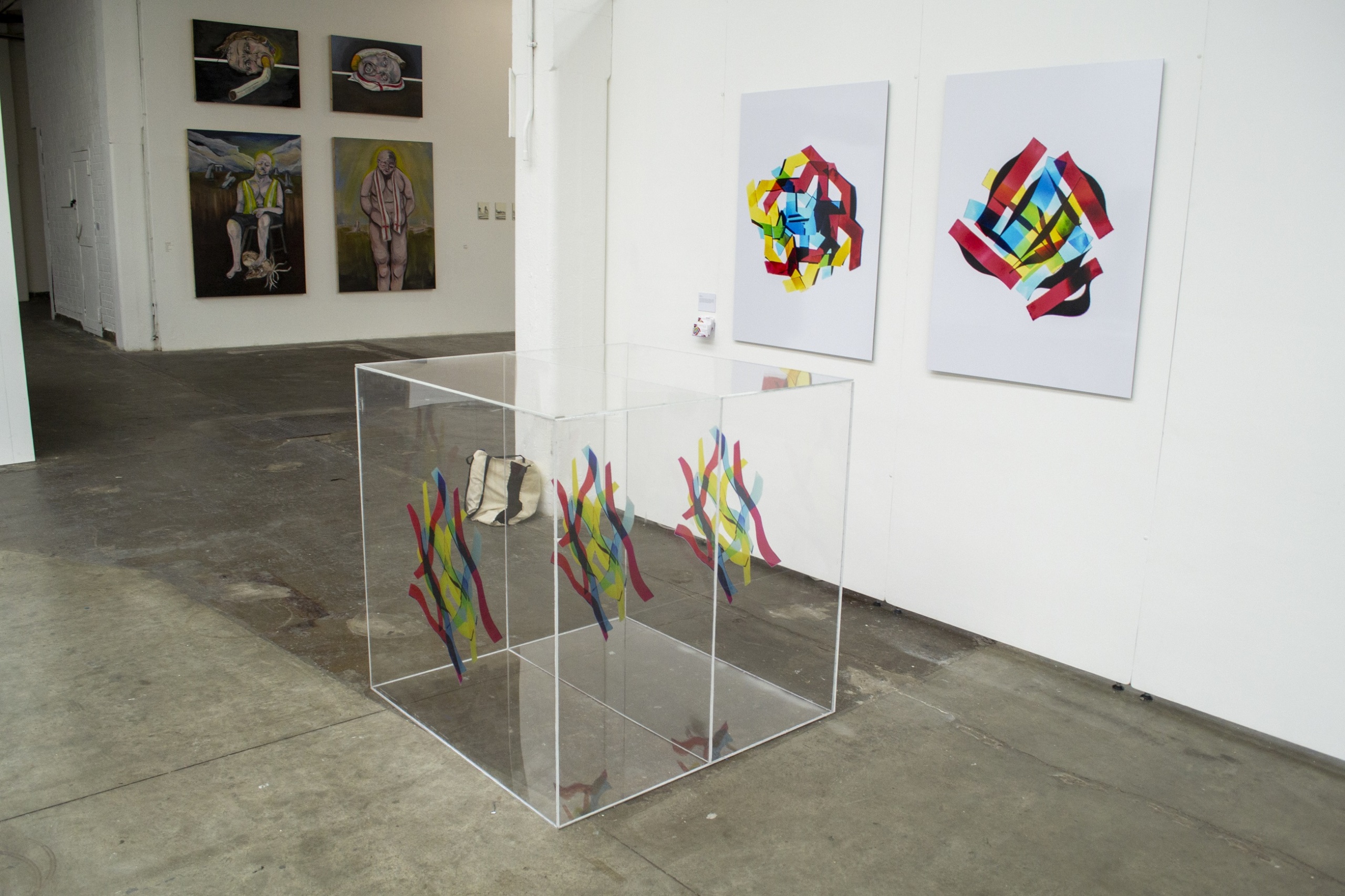 Once you had found the right idea, you had to set an objective. What did you want to achieve with your idea? What was the ultimate aim?

The ultimate aim for me was always to push at what can be considered photographic artwork, especially within the context of the digital. I wanted to achieve a final outcome for this project that showed this aim, as well as being ambitious in scope. My objective at this point in my project was to work out how I could achieve making the sculptural cube element of my final outcome.

With the idea for the design and the aim you wanted to achieve sorted, all you had to do was create it! How did you do it? What were the design phases and how many were there? Tell us about the process that brought your idea to life and made it ready for printing.

To start with, I had to make the decision as to which of my three final images, which one would work best being translated into a three-dimensional form. After some contemplation, I decided on the image that ended up being printed. Designing the cube took a few stages. First, rough sketches working out how the sheets of plexiglass could all fit together and working out measurements. I made a test from cardboard to give myself something physical to experiment with. When I was happy with this stage, I  got hold of some 3D models of what the cube would look like when built, to help me visualise this. My boyfriend fortunately works with 3D design, so he was able to make these models for me. Happy with how this looked, I decided to first make a small-scale version of the sculpture before embarking on making the large, meter sized cube. 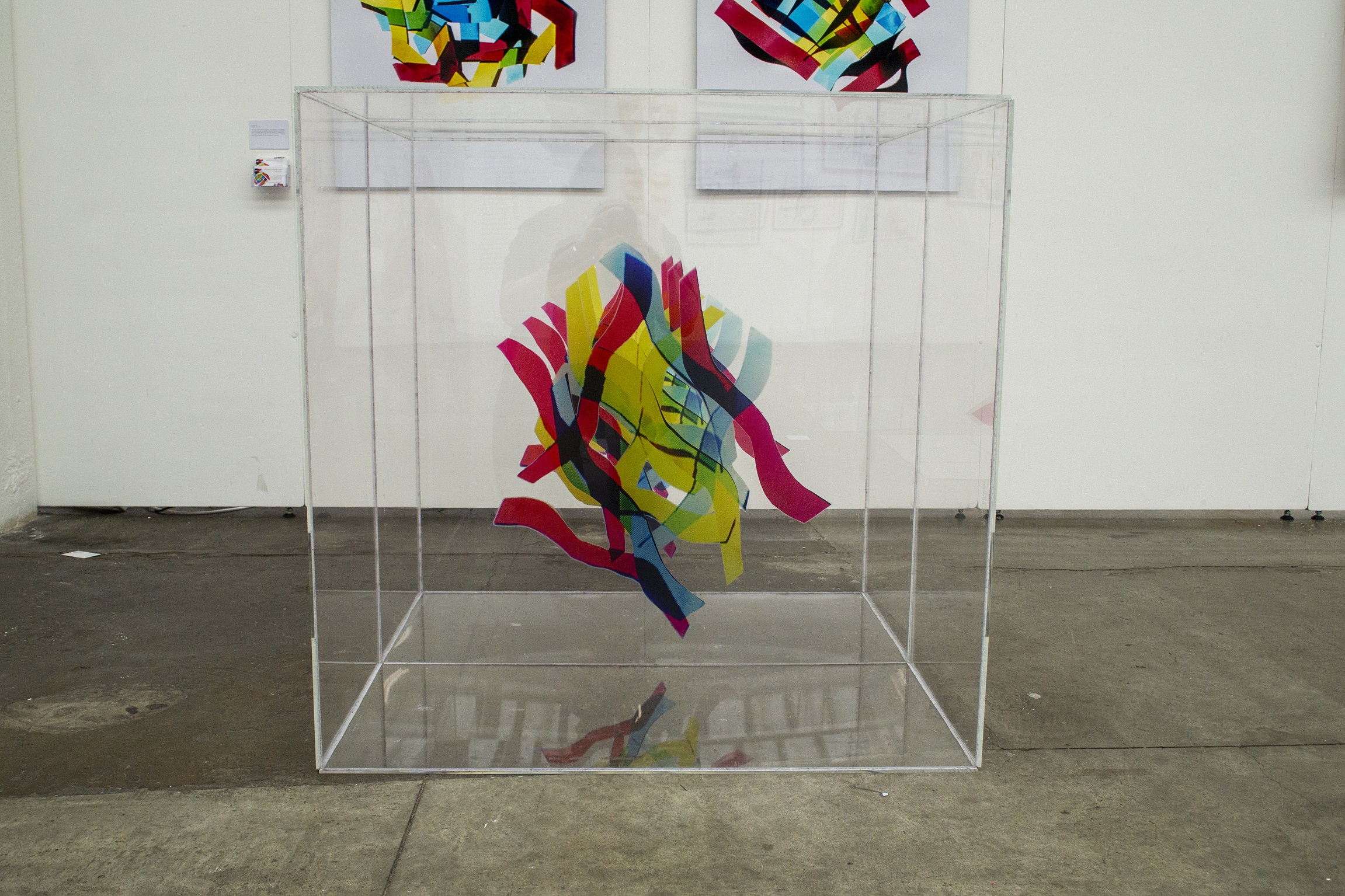 It’s time to print! How did you use print-on-demand to produce your design? Which materials did you choose? And why did you choose these materials and this printing technique?

The online ordering service Pixartprinting offered made it super easy and simple for me to both order the test prints and the prints for the large-scale construction. I was able to easily order 3 sheets at 1x1metre of plexiglass, with a thickness of 5mm, printed with my abstract photographic imagery. I chose the plexiglass as it allowed me to print of a completely transparent material, that tied back in to the method of creation in terms of using projection to create the photographs. Printing directly onto the plexiglass, without any of the whites showing, really let me layer the imagery up how I wanted it to look. The cost was very reasonable I felt, and I was very happy with the quality of the products that I arrived.

Now it’s time to make the most of the products you created. In your case, the aim was to produce genuine artwork that challenged the status quo. How did it feel to see the finished items sat on the floor?

Seeing the work all come together, the two prints and the sculptural piece, felt great. I was really happy to see the outcome of months of hard work pay off. Part of the work was exhibited at the Arts University Bournemouth as part of their Summer Shows, and then the entirety of the work was shown at our grad show that was held at the Old Truman Brewery in London. I definitely feel that I achieved my aim in creating work that pushed at the boundaries of photography. 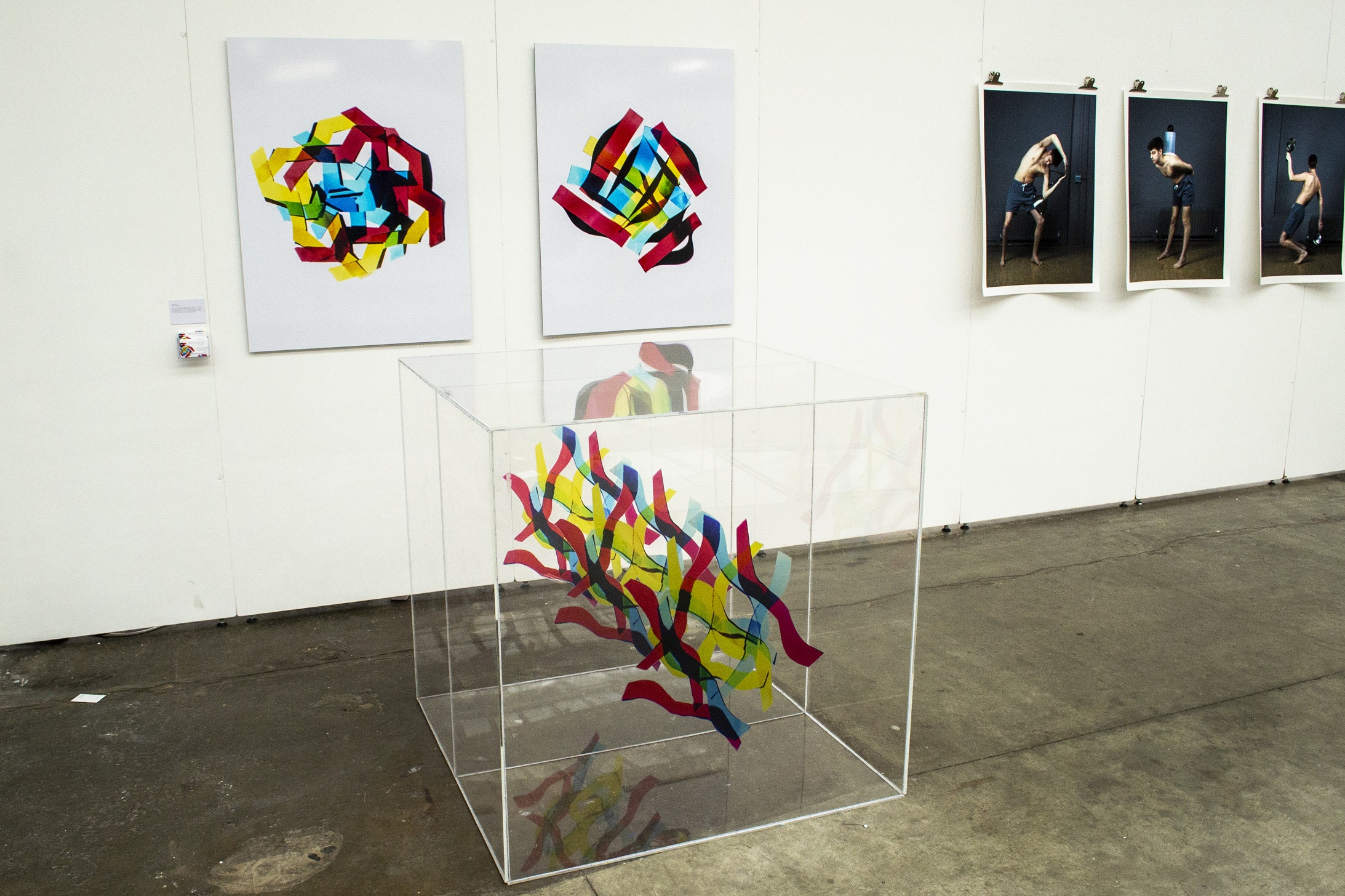 This is only the start! What other projects do you have planned for the future? Can you share them with us?

Now that I’ve graduated from university, I have both less constraints but, on the flipside, less support for projects in terms of no longer having the facilities that the university offered. This was part of the reason that for this last project I wanted to develop a technique for making work, in terms of the multiple projections, that I could sustain after university. In terms of further projects, I want to continue exploring the boundaries of photographic practice. I really enjoyed creating a three-dimensional piece of work, so this is something I feel excited to continue exploring moving forward, considering the idea of photographic sculpture. Shameless plug, but do feel free to check out my work either on my Instagram: sophia.lewis.fry or my website www.sophialewisfry.co.uk, if you would like to see more of my artwork.

Is advertising really just about selling?

A guide to finding, trying and buying fonts