What lies in store for the internet in 2017?

Online advertising will overtake television ads; voice and images will begin to replace the written word; gaming will start to compete with traditional sports; and India will offer innovative business opportunities: these are just some of the predictions contained in the 2017 Internet Trends Report, which was presented on 31 May at the Code Conference.

This annual study, curated by Mary Meeker from the venture capital firm Kleiner Perkins Caufield & Byers, has been revered for its insight into the future of the internet ever since its first edition in 2001.

The global Internet users community reached 3.4 billion members in 2016, after eight years of vertiginous growth, increasing by 10% every year, according to Meeker’s report. 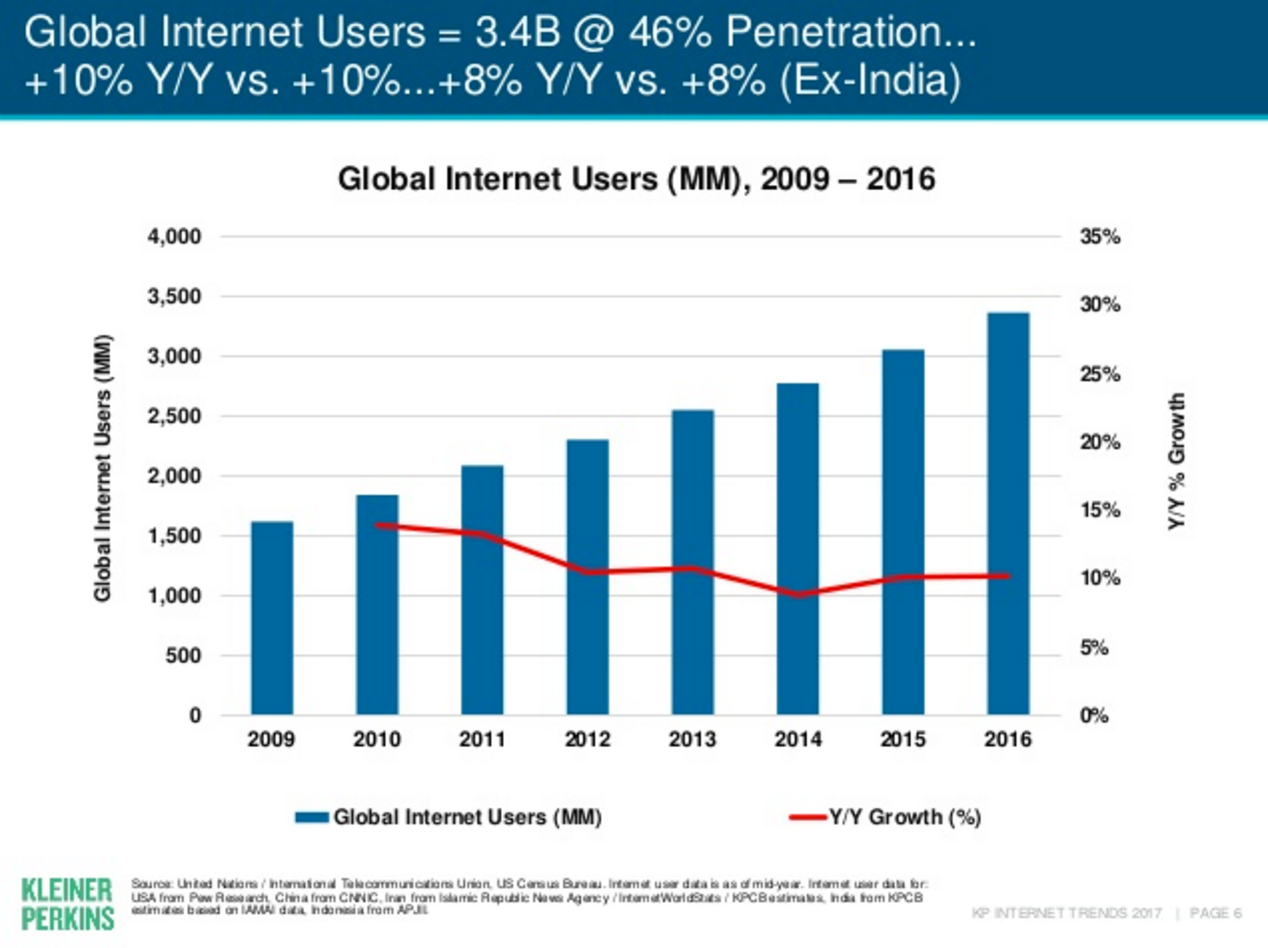 In 2016, smartphone deliveries grew by “only” 3% compared to the previous year (in 2015 they had skyrocketed, going up 10%). However, this does not mean the assault of the web by smartphones is at risk; these devices are responsible for the majority of the growth in online advertising, stealing an ever larger share of the market from computers.

When it comes to advertising, the Internet Trends Report presents two startling statistics. The first is that 85% of the growth in online advertising is going to Facebook and Google. The second is that investment in internet advertising equalled the amount spent on television ads in 2016, and all the indications are that in 2017, in a landmark moment for the industry, it will exceed it.

Voice and images are starting to replace the written word when searching for information online.  In 2017, Google has learned to recognise the words pronounced by its users as well as humans can (with an accuracy level of 95%), clearing the way for the use of voice technology on a massive scale. With the barrier of recognition out of the way, the next challenge is to develop artificial intelligence that can understand the context of words.
Queries using images are heading in the same direction. “A sizable part of future searches [for information online] are going to be about pictures instead of keywords” Ben Silbermann, the founder of Pinterest, stated. 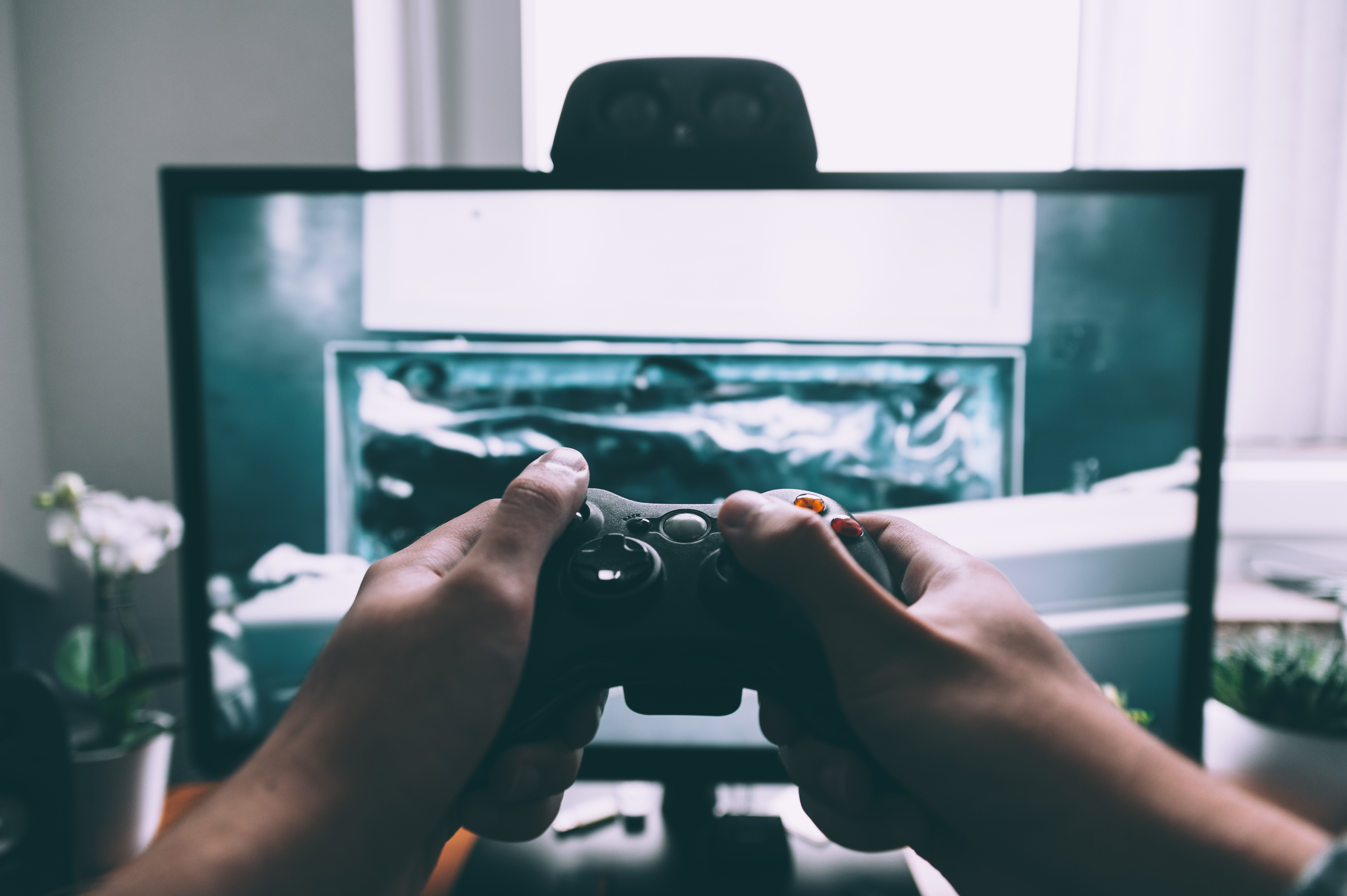 According to Meeker, gaming is driving technological innovation on the internet. 2.6 billion people are registered on online interactive games, a sector worth $100 billion. But there’s more: online gaming is turning into eSport, a new form of spectator sport. The final of the game League of Legends brought 20,000 spectators to the Staples Center in Los Angeles in 2016, plus another 43 million online.

Another driver of internet technology is the cloud, which is growing exponentially, especially in industrial applications. Here, Meeker believes, the main challenge is security.

Listening to music and watching videos are two of the main reasons users connect to the internet.

Spotify now account for 20% of the music industry’s income (despite having been in existence for less than ten years!) Netflix has grown by 700% compared to 2011: another warning shout for traditional TV.

A less obvious online trend is the use of the web for health purposes. Downloads of health and fitness apps have increased by 15%, and the number of people wearing body monitoring devices reached 102 million in 2016 (the figure was four times lower in 2014). Furthermore, over half of users are willing to provide information about their health to Google, Microsoft or Apple, in exchange for useful services.

According to Meeker’s report, the world’s internet hot-spots are India and China. The number of Indian users grew by 28% in 2016, an exceptional rise, and one that could continue for a long time given that currently only a minority of the country’s 1.3 billion inhabitants are connected. The spread of smartphones has also had a significant impact: in 2016, the cost of a gigabyte of data halved thanks to new competitive offers from local companies. The arrival of cheaper smartphones could see internet growth in the country expand at an even faster rate.
China, meanwhile, has been developing rapidly for several years, with companies like Tencent, Alibaba, Baidu, Ant Financial, Didi Kuaidi and Xiaomi driving a vibrant internet services market. Two emerging sectors are payment via smartphone and bike sharing. Despite this, however, the United States still tops the charts when it comes to online business. Seven of the ten most valuable internet companies are American, with Apple, Google-Alphabet, Amazon and Facebook at the top of the pile. 1.5 million people work in online companies based in the USA.

The 2017 Internet Trends Report therefore confirms that the web’s precipitous growth shows no sign of abating, and that it is constantly changing. The marketing world should take note of these changes, and use them to its advantage.