The fascinating story of a revolutionary infographic

We often take the everyday tools we use in our work for granted. But sometimes it’s worth looking back in time to understand the needs that led to these tools being created, and why they developed the way they did. It was while mulling this over that we suddenly had an impulse to investigate the history of infographics, one of the most commonly used visual products in the worlds of communication, journalism and education.

During our research, we stumbled across the fascinating story of one of the very first infographics: a tale that brings together science, art and society, set during an adventurous scientific expedition to South America. It is also the story of an image that, in its own way, changed the history of science and the way we look at nature. All in all, we thought it was well worth telling you about! 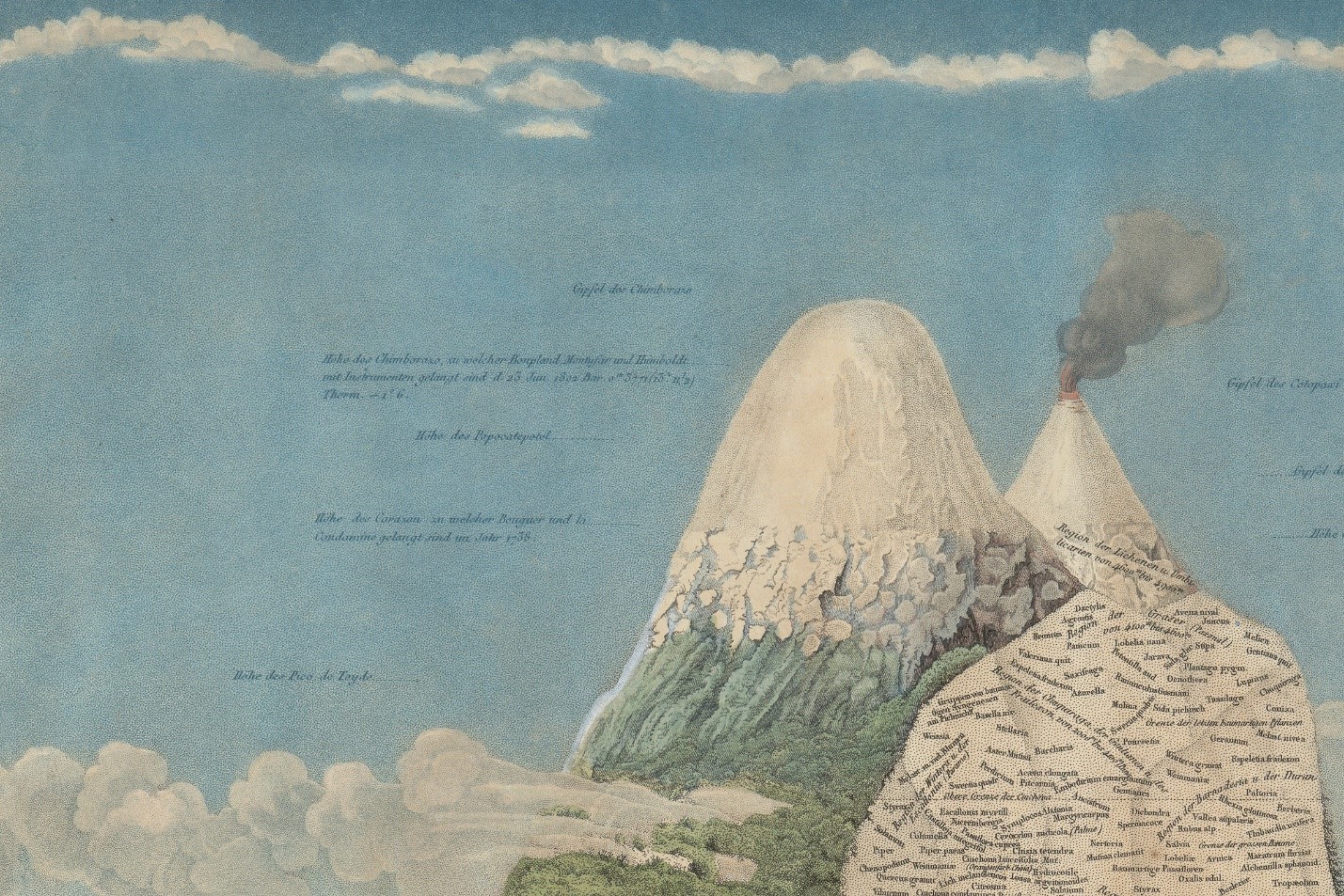 The piece of graphic design that gave rise to ecology

The star of the story is Alexander von Humboldt, and the image we’re talking about is called Naturgemälde, which loosely translates as Painting of Nature. Humboldt was one of the nineteenth century’s leading scientists – a friend of great poets like Friedrich Schiller and Johann Wolfgang von Goethe and revolutionary figures like the adventurer and explorer Simon Bolivar – and his drawing, published in 1807 at the end of a long journey around South America, is considered one of the first infographics ever created.

This graphical representation was incredibly important because, for the first time in history, it provided an intuitive, visual and all-encompassing view of the natural world as a series of connections between living things. It is therefore also seen to have been the starting point for ecology and natural science as we understand them today.

The drawing was published for the first time in Alexander von Humboldt’s Essay on the Geopgraphy of Plants, published in 1807. But he produced the first sketch in 1802, immediately after climbing one of the highest mountains in the world.

The world seen from the top of a volcano

When he climbed Chimborazo, Alexander von Humboldt had already been travelling around South America for several years: he had observed the coasts, tracked rivers that had not yet been mapped and walked through the Amazon rainforest, as well as dealing with Jaguars and terrible malaria-carrying mosquitoes. Then, in June 1802, along with his travel companion Aimé Bonpland, Humboldt set his sights on reaching the top of Chimborazo. 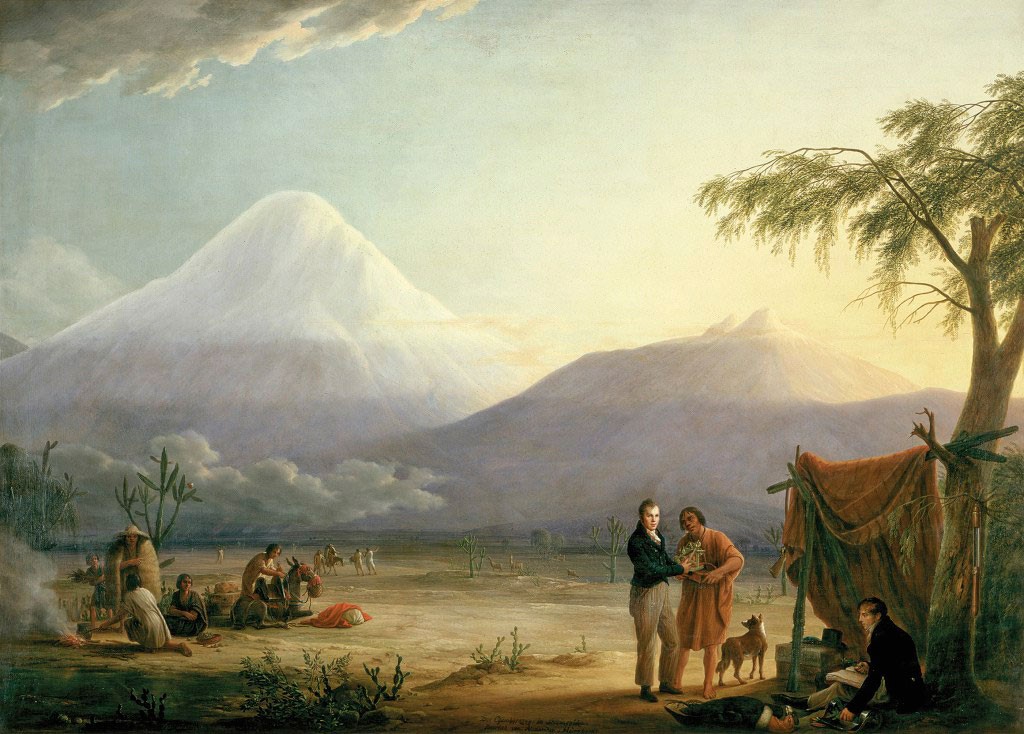 Chimborazo is an enormous volcano in the Andes, within the borders of Ecuador, and at the time the infographic was made, it was thought to be the highest mountain in the world (interestingly, if you measure the height of the mountains from the centre of the Earth, Chimborazo is actually taller than Everest).

Nobody had ever climbed the mountain before, and it was an exhausting challenge, especially given that every time he stopped the scientist gathered the precious information that later made its way into Naturgemälde. We should mention that Humboldt never quite made it to the top: he was forced to stop just below the peak. But it was there, at an altitude of 5970 m, that he had his brainwave: he imagined the world at his feet as an interconnected whole, which he later depicted in a beautiful image that would take the world by storm.

What does this innovative depiction of nature show?

But let’s take a closer look at Naturgemälde, which today would certainly be considered an infographic.

The large painting (90 x 60 cm) depicts a sort of cross-section of the South American continent, with the two oceans on each side, the Pacific on the left and the Atlantic on the right. However, it focuses on one mountain in particular: Chimborazo.

The mountain, with its smooth, snow-topped summit, is expertly drawn in cross-section, and contains the distribution of the various species of plants by altitude, from the subsoil to the peak, over 6000 m above sea level. The image therefore documents several underground plants, before moving on to the colourful flowers of the tropical jungle which, as the altitude increases, give way to grasslands. Eventually, at above 4000 metres, the only flora to be found are lichens.

Next to the diagram, Humboldt gives us some useful information to provide more context: data on the altitude and his measurements of light, the geology of the region and atmospheric pressure. It also lists the altitudes of the most famous mountains at the time – such as Vesuvius and Mont Blanc – and the height that Antoine Gay Lussac reached in his famous (and fearless) ascent in a hot air balloon – 7016 metres above sea level.

Finally, there is also a list of the various animals that populate the environments at various altitudes.

The importance of thinking – and communicating – visually

In a single, beautifully designed and captivating drawing, Humboldt therefore managed to summarise information in a wide variety of fields, from botany to a visual comparison with altitudes that would be understood by readers, as well as including interesting facts and more technical details.

Even today, this image would be considered a perfect infographic, as it combines various pieces of knowledge in a single vision, all using the incredible power of an image to tell a thousand words.

Back in the nineteenth century it was truly revolutionary, and not just in terms of its graphic design: it was the first time that someone had connected the various parts of nature together and turned them into a tangible and explanatory image. It gave rise to the concept of ecosystems, where everything is interconnected and every action has consequences at a global level.

The concept resonated greatly with people; indeed it was so successful that it is still the way we look at nature today. And the idea may owe some of its success to the image used to describe it.

If you want to know more about this image and about Alexander von Humboldt himself, we highly recommend Andrea Wulf’s book ‘The Invention of Nature’ (Luiss University Press). And if you want a public-domain version of Naturgemälde in a format suitable for printing, you can download one here.