The visual identity of the Winter Olympics

The unveiling of the official logo for each edition of the Olympics and Paralympics always generates keen interest and, very often, divided opinions among graphic design experts and the general public alike. That’s because the logo is the calling card for each edition and must not only express the games’ sporting values and their global reach, but also the specific identity of the host city and country, all in one authoritative and contemporary package.

The latest logo to be unveiled, for the Milan-Cortina 2026 Winter Olympics, certainly didn’t go unnoticed. For the very first time, in fact, the symbol for the Olympics was chosen by the general public. The practice of putting a logo to a public vote is often criticised, but given the importance of the event and the interest generated, it’s understandable to want to involve ordinary people in the decison-making process. Anybody could go to the official site and vote on the two alternatives, Dado and Futura, created by Landor. The winning logo, Futura, was announced by Federica Pellegrini and Alberto Tomba at the final of the Sanremo Music Festival on 6 March 2021. 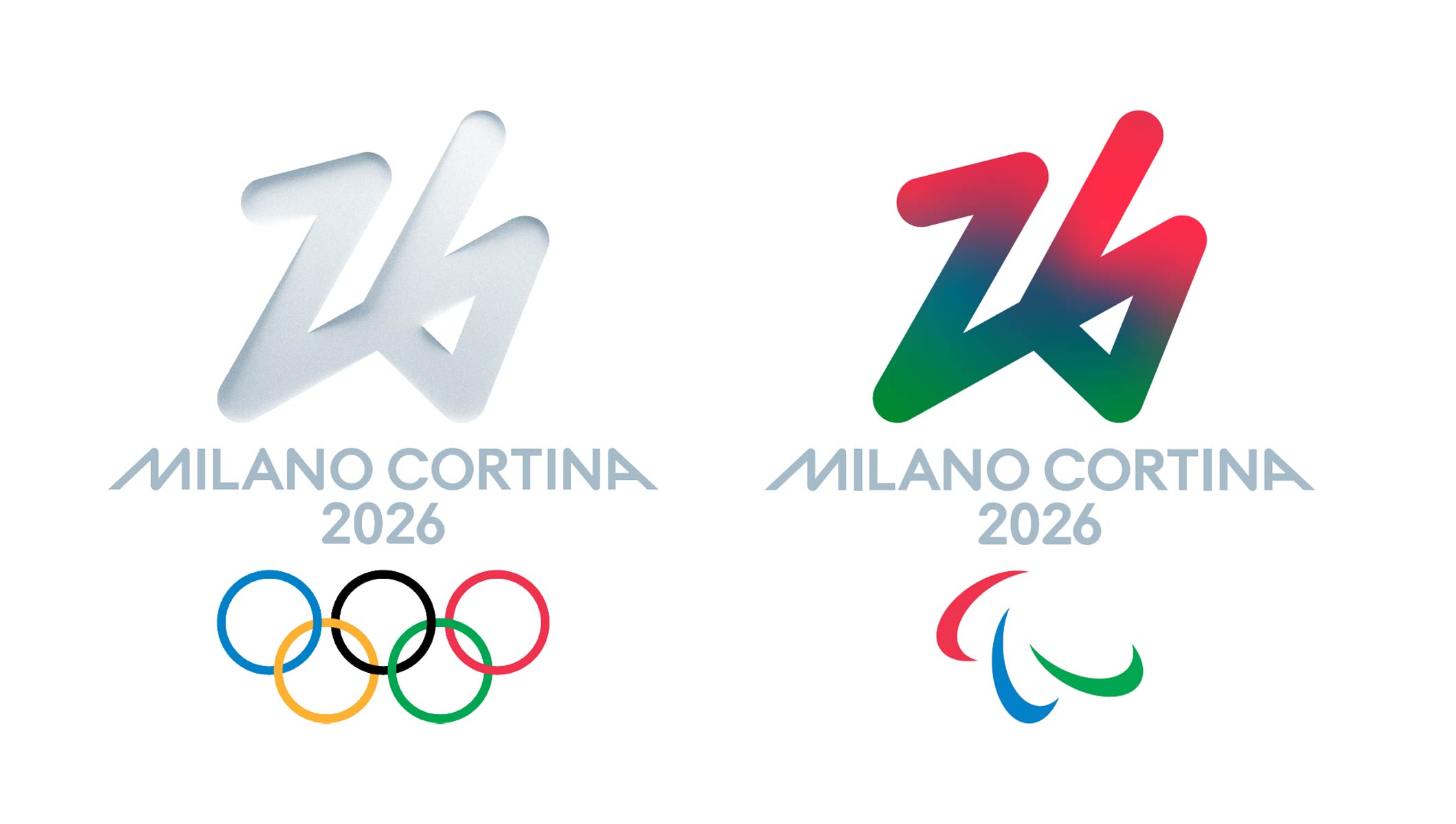 The logo is used in two colourways, one silver and the other a fade of red, blue and green, to represent the Olympics and Paralympics respectively.

The Winter Olympic Games are more recent than their summer counterparts. They were held for the first time in 1924 at Chamonix-Mont-Blanc and interest and participation in them have grown at each edition since then. Below is a selection of visual communication – from logos to posters and pictograms – from past winter games that particularly caught our eye. In tracing the history of visual communication at the Winter Olympics, it quickly becomes clear how the language of graphic design has evolved over the past century.

The first Winter Olympics were held in Chamonix, France. There was neither a logo nor an emblem, but to advertise the event 5000 copies of a lithographed poster were produced. Packed with symbolism, the poster depicts an eagle flying above a snow-covered bobsleigh run, clutching in its talons palm branches and a laurel wreath tied together by a French tricolour.

Posters continued to be used in successive editions, at which emblems and crests also began to appear on things like coins, pin badges, tickets and more…

The first true logo arrived at the 1960 Winter Games, which broke with the tradition of antiquated emblems and brought a modern touch. We’re in California in the sixties, a period in which designers like Paul Rand and Milton Glaser were revolutionising graphic design with a style that was minimal and concise yet human and dynamic.

The colourful and geometric logo for Squaw Valley 1960 is not particularly balanced or unique, but perfectly embodies the innovative spirit of the time.

Different versions of the logo were made featuring one, three or four colours, depending on the medium. It was also used for posters, where it was enlarged and laid over a layer of snow in the background.

The logo for Sapporo 1972 is made up of modular parts: the rising sun, an abstract and geometric snow flake and the Olypmic rings, beneath which is the name of the host city. This system is very flexible: in the official version, the sections are arranged vertically, but being adaptable to the medium, they can also be laid out horizontally or in a square.

The result is extremely effective in its simplicity. Just as effective are the official poster, which keeps the geometric, vertical layout, and further photo posters created for the event, on which the logo stands out against the cold shades of the background.

Simplicity is also the hallmark of the logo for Sarajevo 1984: the Olympic rings sit above the main symbol, a stylised snowflake that resembles the decorative patterns typical of the region. Also effective is the choice of colour, a bright orange that stands out against the cool tones of winter landscapes. This contrast is used to good effect on the official poster, which consists of an abstract blue and white background created by projecting and manipulating a white version of the logo, over which the orange version of the logo is laid.

For this edition of the games, as had now been the custom for several years, a series of pictograms where used to represent every sport. They are similar to those used for Munich 1972 (designed by Otl Aicher) but with added lines to convey a sense of speed and dynamism.

The logo for the Turin Winter Olympics represents the Mole Antonelliana – the architectural landmark that is the symbol of the city – in a stylised version made from white and blue ice crystals. The dynamic and vertical shape also resembles a mountainside and, more generally, the logo is supposed to embody the values of  city and countryside, valley and mountain, culture and nature, technology and tradition.

The logo for the Paralympics (the first winter edition of which was held in 1976 in Sweden) uses the same crystal pattern, but in a more compact and colourful version. The official poster plays with similar contrasts, showing the Mole Antonelliana as a silhouette in the Olympic colours, an image which can also be interpreted as a ski piste running down a mountainside.

The visual identity of the Turin games also uses another graphical element deployed in various guises: the Piazza, which represents both the Italian spirit and the collective side of the games. The Piazza illustration uses bright shades of colour placed one on top of the other in transparent layers. The end result was used for various applications, from track-side banners to posters and pictograms.

Visual communication for the Olympics, which began with limited print runs of posters, today involves complex systems comprising many different elements. The visual identity is used throughout the host host city, on the pistes and in the arenas where competition takes place, not to mention tickets, advertisements and more… Indeed, it’s impossible to imagine an Olypmics without one today. And it’s undeniable that they have an appeal that goes beyond sport and exerts a lasting fascination on the public.