One of the worst flaws that we communicators have is a short memory. Or, worse still, we deliberately ignore our past. So, decade after decade, we’re condemned to keep thinking we’ve discovered concepts which, in reality, have been around for ages. In corporate communication, as in other artistic professions, there’s a literature: by reading it with the same curiosity we usually reserve for blog posts from the marketing guru du jour, we can surprise ourselves, discover the stunning modernity of 50-year-old campaigns and learn how to make a bigger impact today. In this article, we examine five advertising campaigns that still have much to teach us today. We start with a quick trip to the moon.

1.Real-time marketing. We return to 1969 to really understand it

We begin with this Volkswagen ad. At first glance it seems old and dusty. But look a bit closer and you’ll be astonished (and might even learn something). Try to put yourself there. It’s 1969 and there’s just been a technological miracle, the event of the century: the lunar module has just landed on the moon. And what do the creatives at DDB do? They leverage this news with a themed campaign that adds value to the brand. Sure, they tell us, the Beetle, like the lunar module, isn’t an aesthetic masterpiece, but who cares when it’s so well designed and built? It’s hard not to notice economical use of symbols and the extreme conciseness, which would make this page perfectly suited to today’s digital environment.

Not only is this ad a perfect example of real-time content ahead of its time, it also teaches us a valuable lesson about these types of projects, which are widespread and much discussed online: 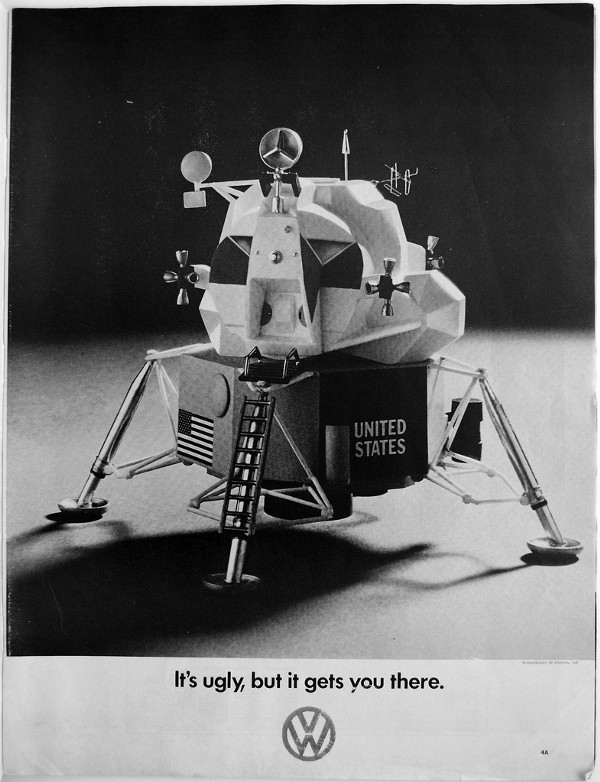 The link between the event and the brand must always be justified.

When we develop content like this, the most important job is to draw a plausible connection between the brand and the event we have decided to leverage. The way we use the event should be relevant to the brand’s identity. Naturally, this link can and should be as paradoxical, witty and orginal as possible, but never be just lip service.

Just recently, Burger King provocatively urged customers to “Order from MacDonald’s”, creating a kerfuffle online. Then there was the epic Twitter battle between the Natural History Museum and the Science Museum in London. In Italy, Twitter was also the perfect stage for the Fiat 500 and Smart to play out their fierce rivalry. Digital disputes between brands often feature witty, brilliant and original writing. But nothing has yet beaten the incredible “We try harder” print campaign by copywriter Paula Green from 1962. In it, car rental brand Avis publicly admitted it was just number two in the market, with the number one spot occupied by Hertz. It became a saga with multiple episodes: a sort of storyline like those that that we’re used to creating on Facebook. 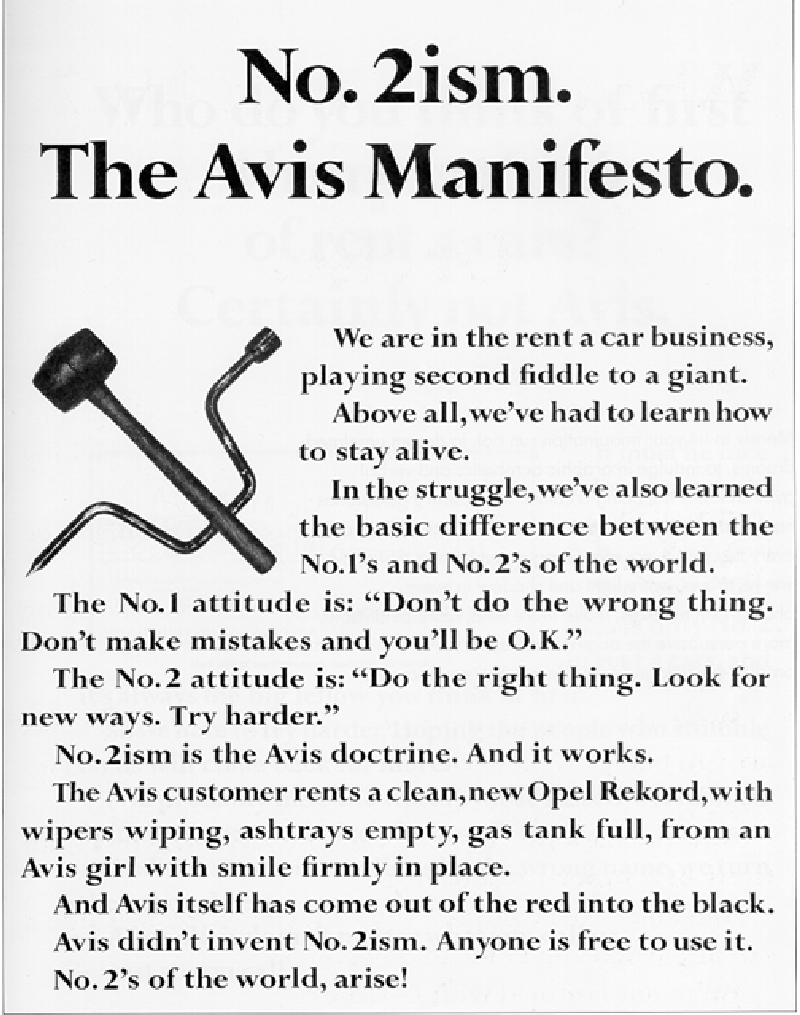 Month after month, more and more new content was released to convince the public that those in second place worked harder to become number one, and win over readers to the cause of “Secondism”. It should be noted that the first chapter in this storytelling campaign started with a manifest, something not too dissimilar to the long-form copywriting pieces that communicators the world over seem to have only rediscovered in the last 15 years. 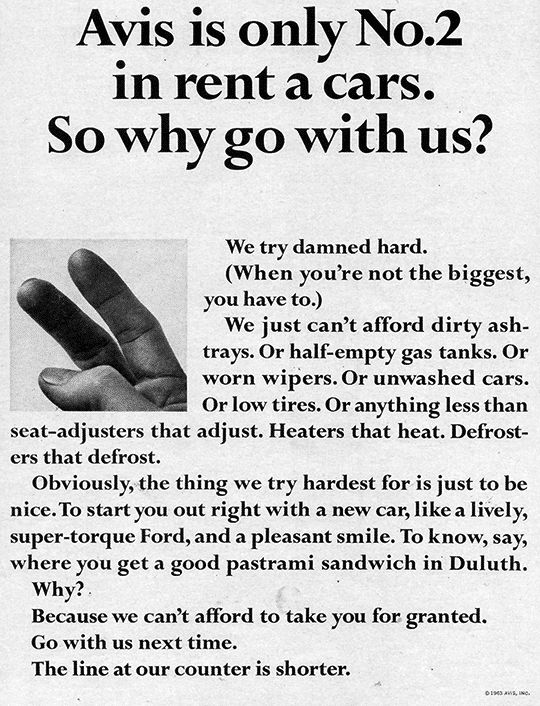 3.Brand activism: emblem of the digital revolution or rediscovery from the past?

Brand activism is generally considered to be one of the latest and definitive phenomena of the digital era. In a market focused on the horizontal communication between firms and people, brands are increasingly aware of their role in society, and are becoming promoters of social and environmental causes. But this was actually already the case as far back as 1967. That was the year in which copywriter Bob Levenson wrote a classic ad for Mobil. “We lose too many customers this way” was perhaps the first campaign in the history of modern advertising in which a brand addressed a theme not explicitly connected with its products, but rather with wider society: the high death toll on the roads caused by car accidents. The ad was a milestone in long-form copywriting: the social cause manages to co-exist with the company’s interests in a delicate balance that culminates in the courageous closing words: 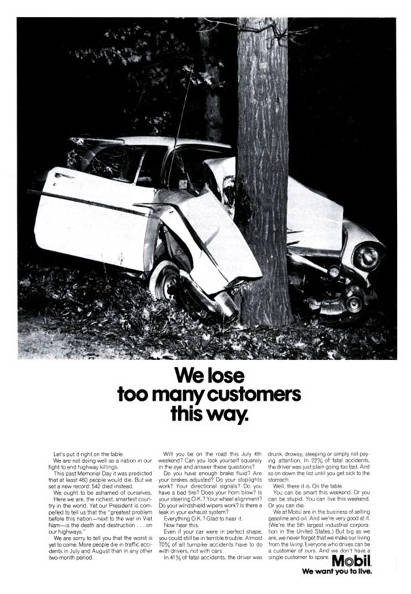 “But big as we are, we never forget that we earn our living from the living. Everyone who drives can be a customer of ours. And we don’t have a single customer to spare. Mobil. We want you to live.”

4.Making the news and gaining earned media: learning from Gossage

Earned media is all the rage in contemporary marketing: it’s a measure of the media coverage of a campaign, in other words, its ability to make the news and arouse the interest of print, TV, radio and other news outlets, thus gaining free media space. And yet, this seemingly contemporary concept has its roots in the early sixties. The Pink Air campaign for Fina was deliberately designed to get people talking: the content was supposed to appear as a lighthearted news item and generate media coverage. And that’s exactly what happened, as was the case for many marketing projects created by Howard Gossage. Throughout his career, the San Francisco copywriter developed campaigns to “make the news”, convinced that the role of the communicator was to build a relationship with a community of people. He was an advertising genius, something that’s clearer than ever 50 years later. 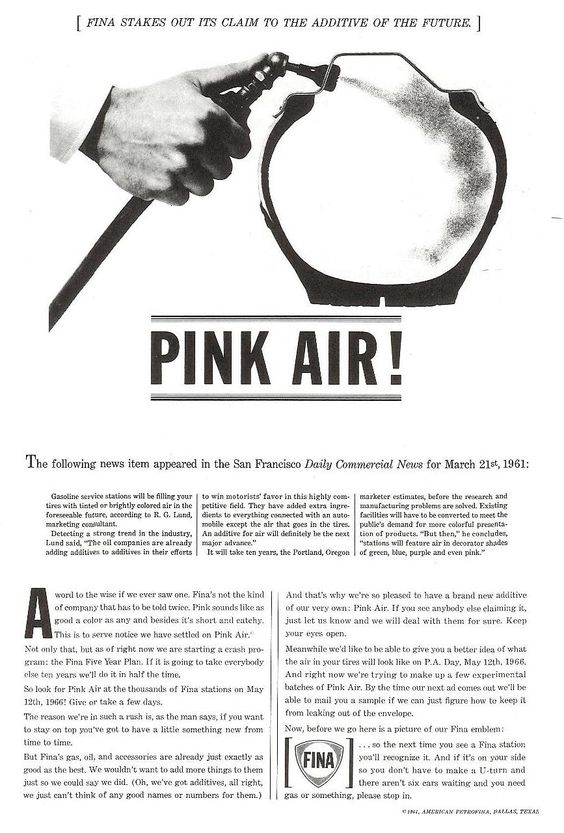 The irreverence of memes: learning from Tom McElligott

As we reach the end of this article, we can’t wrap things up without first talking about memes. Because, memes, with their irreverent and sarcastic humour, are a type of content unique to the digital era, right? Wrong. It seems that the very first meme appeared in 1919 in a satirical magazine published at theUniversity of Wisconsin, the Wisconsin Octopus. And we can’t not remark on the similarity with the campaigns that copywriter Tom McElligott created for the Episcopal Church: as irreverent and direct as you would expect to find in advertising today. But managing to further the cause of the Episcopal Church while at the same time entertaining, surprising and winning approval is no mean feat, and a real lesson in copywriting.

The history of the Mercedes-Benz logo: how a star was born