A few days ago, Mary Meeker’s now-traditional annual report on data and trends in the Internet world was released for 2018. Mary Meeker is a venture capitalist from Kleiner Perkins Caufield & Byers and her annual report (first published in 2001) has become essential reading for anyone working in the digital industry.

Last year, we brought you the highlights of the 2017 report; today, we’ll share the most interesting takeaways from the Internet Trends Report 2018. Some examples: over half of the world’s population will have access to the Internet by the end of the year, in the United States each person consumes digital media for almost six hours a day and there have been significant advances in fields of video viewing and voice recognition.

The report also looks at China and the delicate relationship between data, privacy and technological services. You can find all 294 of Mary Meeker’s slides here.

More than half of the world’s population is online
Over the course of 2018, the number of Internet users will reach 3.6 billion: that’s over half the Earth’s population! Major drivers of this trend are falling Android prices and growing Wi-Fi networks. 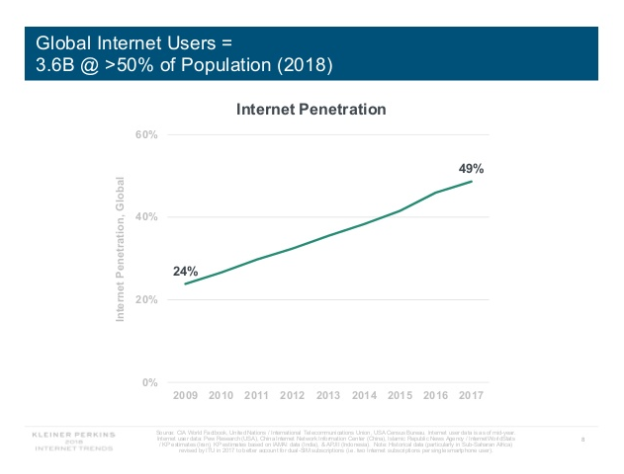 Also rising is the time we spend consuming digital media (+4% compared to 2017): in the US, people spend around 5.9 hours a day on the Internet. Smartphones are increasingly used to access digital media (3.3 hours a day), while the use of computers remains virtually unchanged (2.1 hours a day). 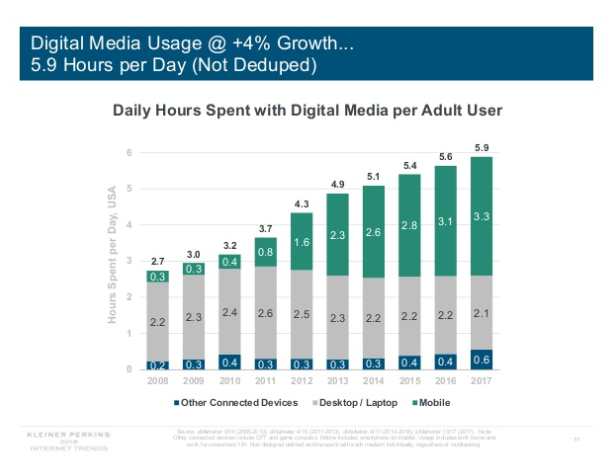 Smartphones: stagnant sales but greater use
Smartphones are becoming ever cheaper, better and faster. Sales aren’t growing but smartphones are increasingly being used to consume digital media. Instant messaging apps are also growing in popularity. 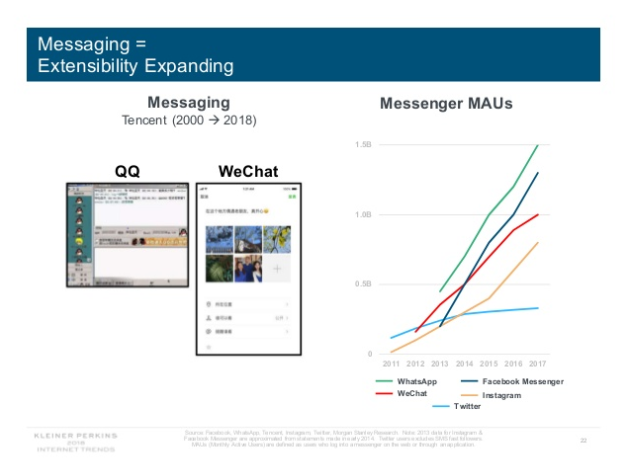 Video: we’re watching new types of content on our phones 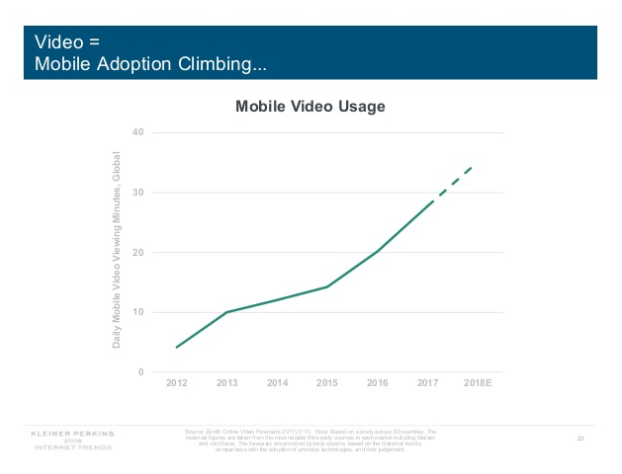 More and more videos are being watched on mobiles: every day in 2018, we’ll watch over 30 minutes of video per head on our smartphones. In China, video content is fuelling the explosion in mobile data usage (+168% in 2017).
New video formats are emerging too. An example is Twitch, a platform for streaming videogame sessions, whose use is constantly growing. There is now more room for new types of content. 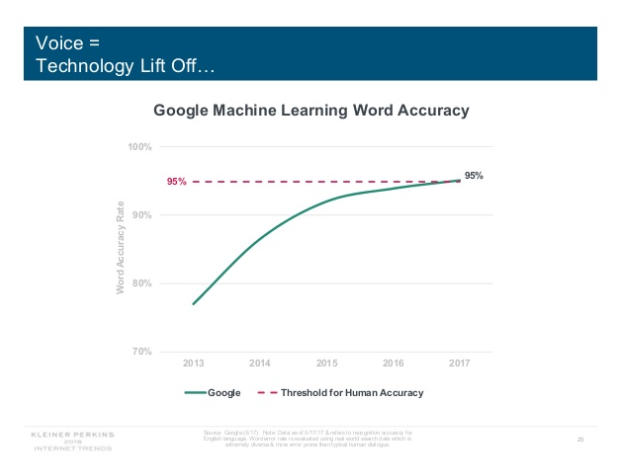 Google’s voice recognition technology has almost reached human levels of accuracy (95% accuracy). 2018 therefore promises to be a turning point for voice technology. At the end of 2017, over 30 million Amazon Echo units were sold in the United States (in 2016, this number was fewer than 10 million). Amazon Echo is the voice-controlled smart speaker developed by Amazon. 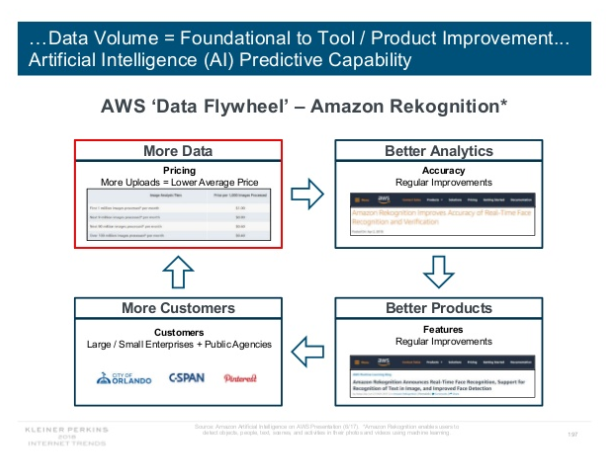 The use of personal data is leading to improvements in the services offered by digital products and, as a result, to an increase in customers. In China, 38% of citizens would be willing to share their personal data in exchange for benefits in terms of services offered. In Italy, that figure is 28%, greater than for other European countries (for example, 16% in the UK and 12% in Germany). 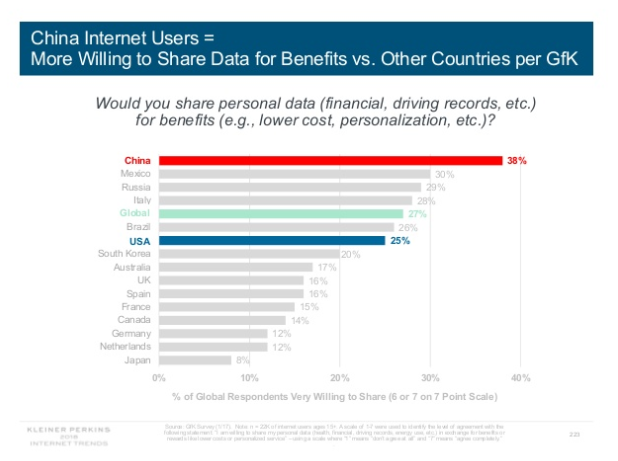 When the benefits of sharing data are not clear, most users react by cancelling the product or app (64%) rather than changing the privacy settings (47%).

E-commerce: the importance of social media 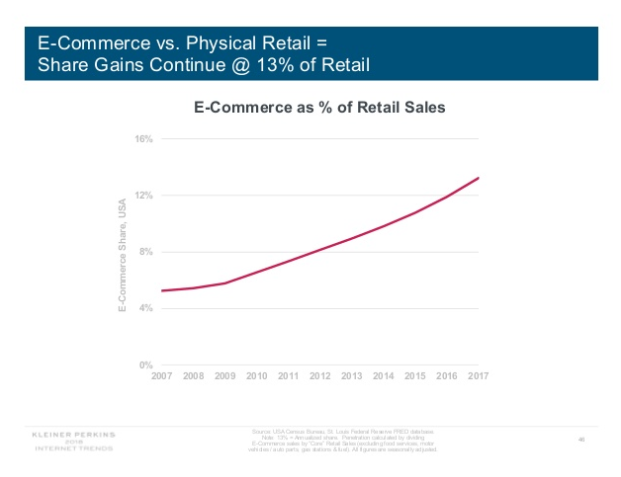 Online sales are growing. In the United States, e-commerce reached 13% of all retail sales in 2017, and was worth over 400 billion dollars. E-commerce is trending towards mobile (online shopping via apps grew by 54% between 2016 and 2017), while the online experience is increasingly personalised and interactive. 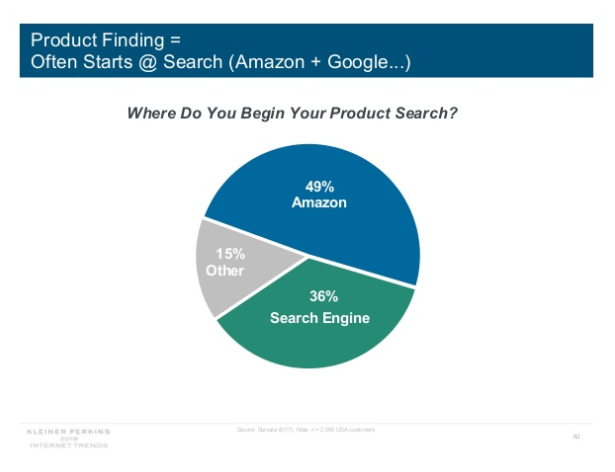 Product searches start principally on Amazon or Google. But most product finds comes via social media. Some 55% of product purchases online originate from finds made on social media. 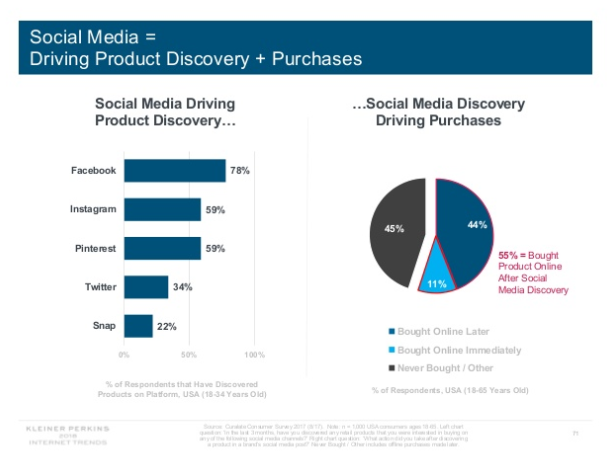 The report also compares Amazon with its Chinese competitor Alibaba. While Amazon has higher revenues, Alibaba has a greater merchandise volume and is investing to expand in countries like India, Pakistan and Indonesia. 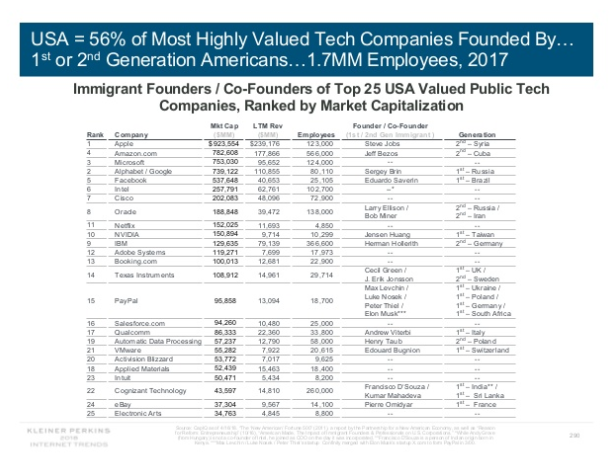 The final slides are a message to the Trump administration, which has restricted visas for highly skilled immigrants. In the United States, 56% of the most valuable tech companies were founded by first- or second-generation immigrants. These firms have created 1.7 million jobs.