Magazine covers that made history

Some images cease to be mere photos or illustrations and instead become chapters in history. To write this article, we rummaged around in the attic of our memory and dusted off some of the magazine covers that have become collector’s items over the years. Front pages that have travelled the world, marking major and minor milestones in history.

We look at fashion shoots that made waves, at Life’s most famous front pages, as well at the intriguing anecdotes behind celebrated covers and much more. We will show them all and give you a fascinating peek behind the scenes.

Glamour: the first girl of colour on a cover

It was August 1968 when this issue of Glamour came out. 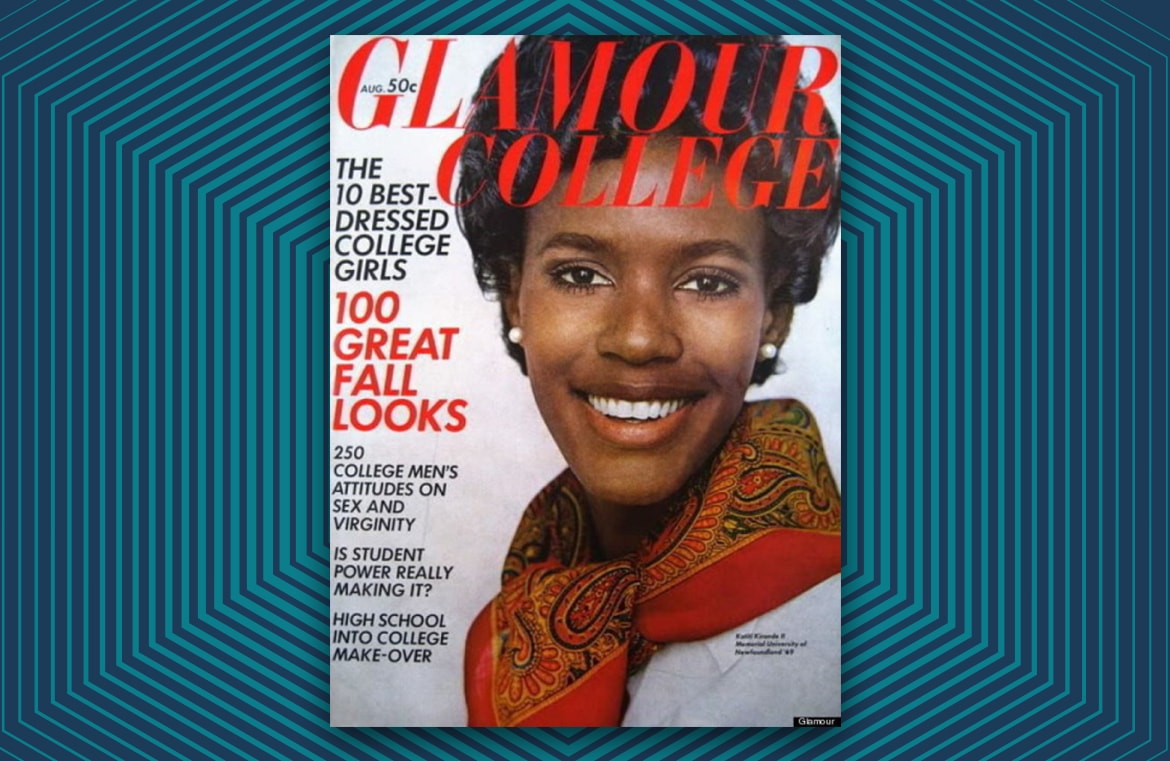 At first glance, there’s nothing out of the ordinary about the cover. It features Katiti Kironde, an 18-year-old Harvard student and daughter of a Ugandan diplomat. She’s there because she won Glamour’s Top 10 Best Dressed College Girls contest. But what you probably don’t know is that Katiti was the first woman of colour to appear on a magazine cover. The image of this smiling, sophisticated young woman became a symbol of racial integration. And it remains Glamour’s best-selling issue of all time.

Life magazine covers: from the Beatles to the first moon landing

From the moment that Henry Luce, the father of modern photojournalism, acquired the magazine in 1936, the covers of Life started carrying reportage images and portraits of influential figures. The magazine published images from photographers of the calibre of Robert Capa, Gordon Parks, Alfred Eisenstaedt and Henri Cartier-Bresson. Today, the print version of the magazine no longer exists, but some of its most famous covers are etched in our memories.

Like the front page from 28 August 1964 featuring the Beatles. 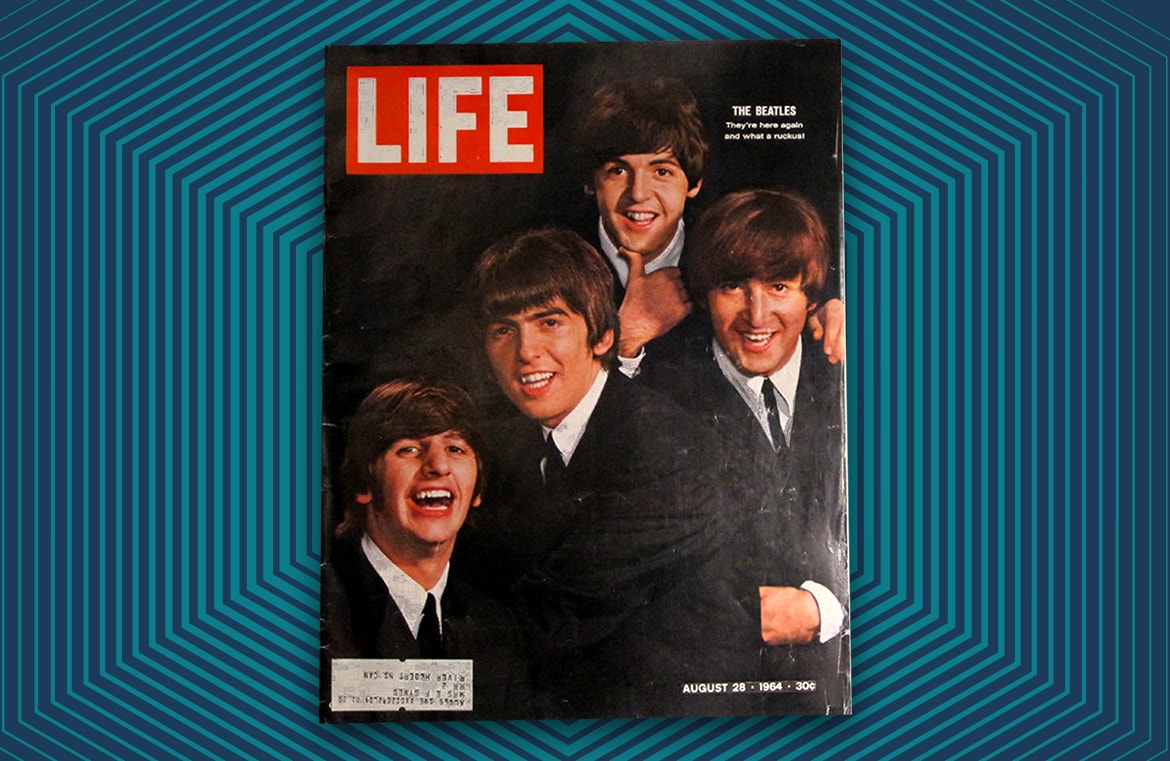 In February of that year, Henry Luce decided to dedicate the cover of an issue to an up-and-coming British band that was touring America at the time. The editors were not totally convinced and the idea was initially abandoned. However, a few months later, they were forced to rethink when the Beatles returned to the United States for a second tour, not as emerging artists, but bona fide international stars. Life devoted the cover of the last August issue to the foursome, publishing a photo that was in fact taken by John Dominis in Britain back in January.

On 30 April 1965, the magazine stunned readers with this cover image, which was jaw-dropping at the time 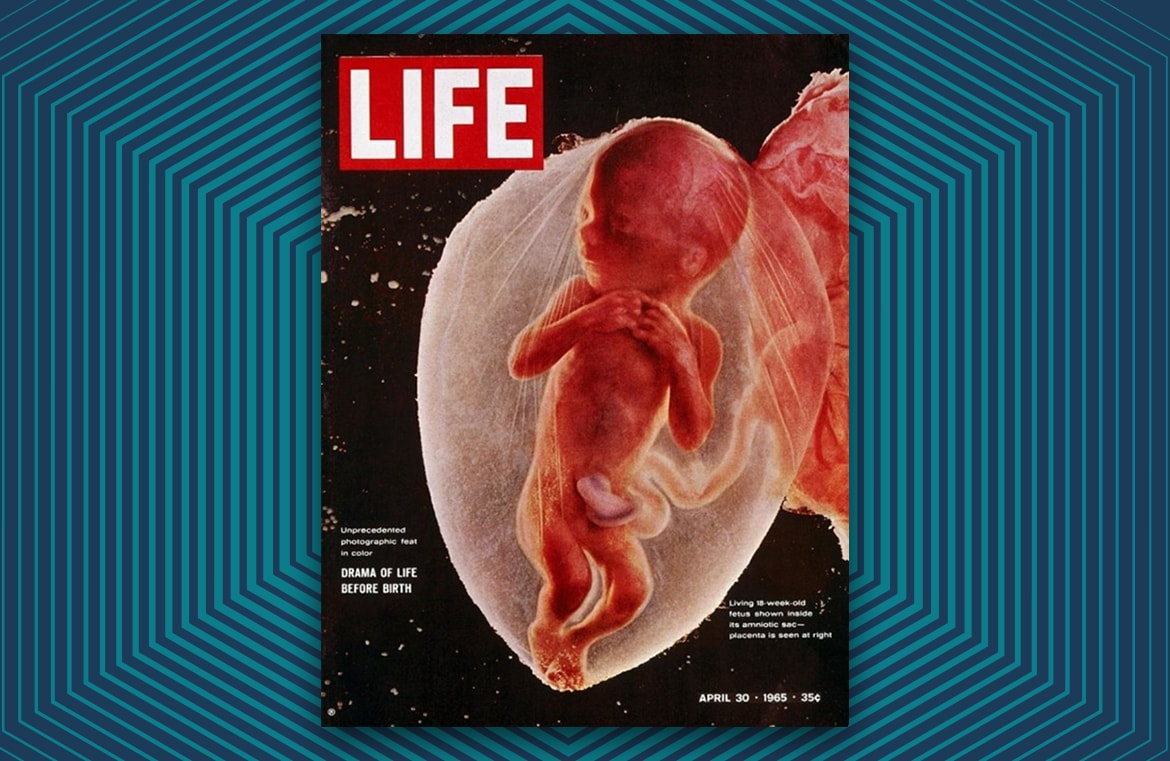 It’s an 18-week-old foetus in its amniotic sac. This incredible image was the work of the great Swedish photojournalist Lennart Nilsson who, some ten years previously, had embarked on a seemingly impossible quest: to photograph, in colour, the various stages of human reproduction, from fertilisation to birth. Nilsson’s photographs are incredible: he’s the first photographer to document the development of human life. However, what many don’t know is that most of his photographs depicted dead foetuses.

The most famous of Life’s covers is without doubt that of the first moon landing in 1969. For many, this image is synonymous with man’s conquest of the moon. 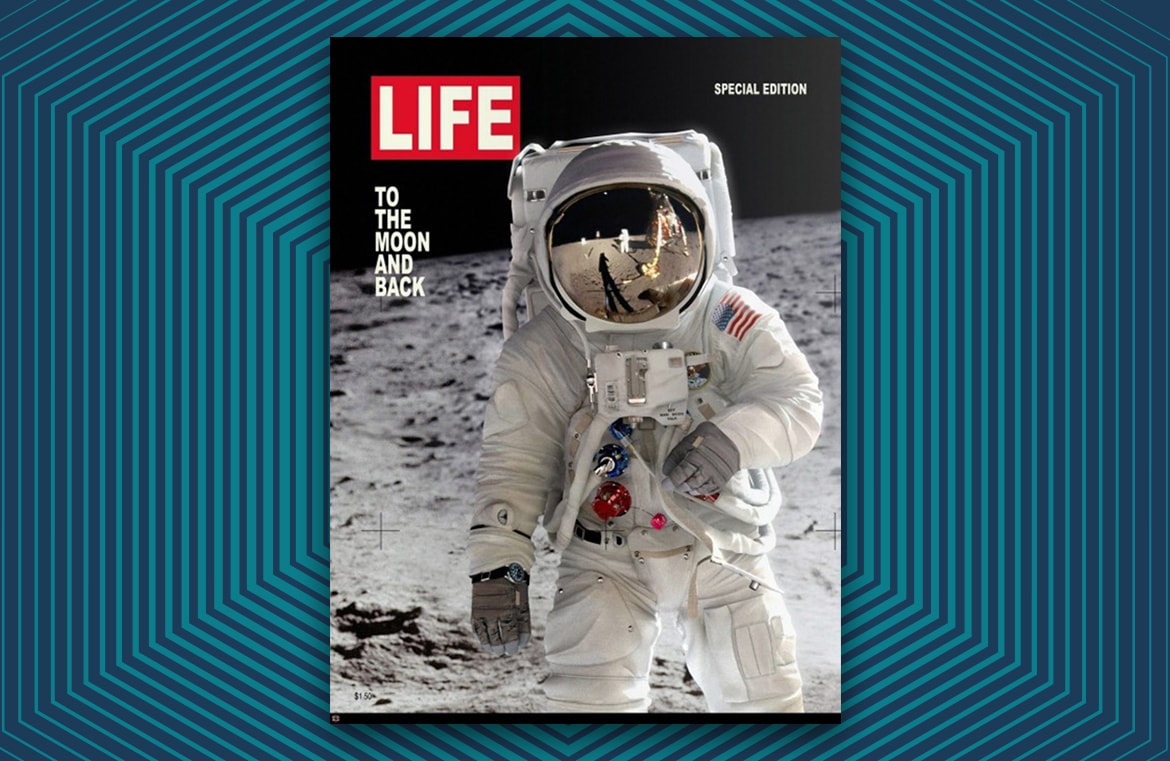 “To the Moon and Back” documents the first moon walk as part of the Apollo 11 mission, which took place on 20 July 1969. Two weeks later, on the cover of Life, we see a photograph of Buzz Aldrin standing on the moon in his spacesuit, with Neil Armstrong, who took the photo, reflected in the visor of Aldrin’s helmet. A priceless edition. Or more accurately, one that sells on Amazon for $265,000 (new).

Now let’s turn our attention to music. In December 1980, Rolling Stone commissioned Annie Leibovitz a John Lennon photo shoot. The ex-Beatle insisted on being photographed with wife Yoko Ono and so Leibovitz suggested the couple pose nude together. But Ono, uncomfortable with the idea, kept her clothes on. The cover came out in January 1981. 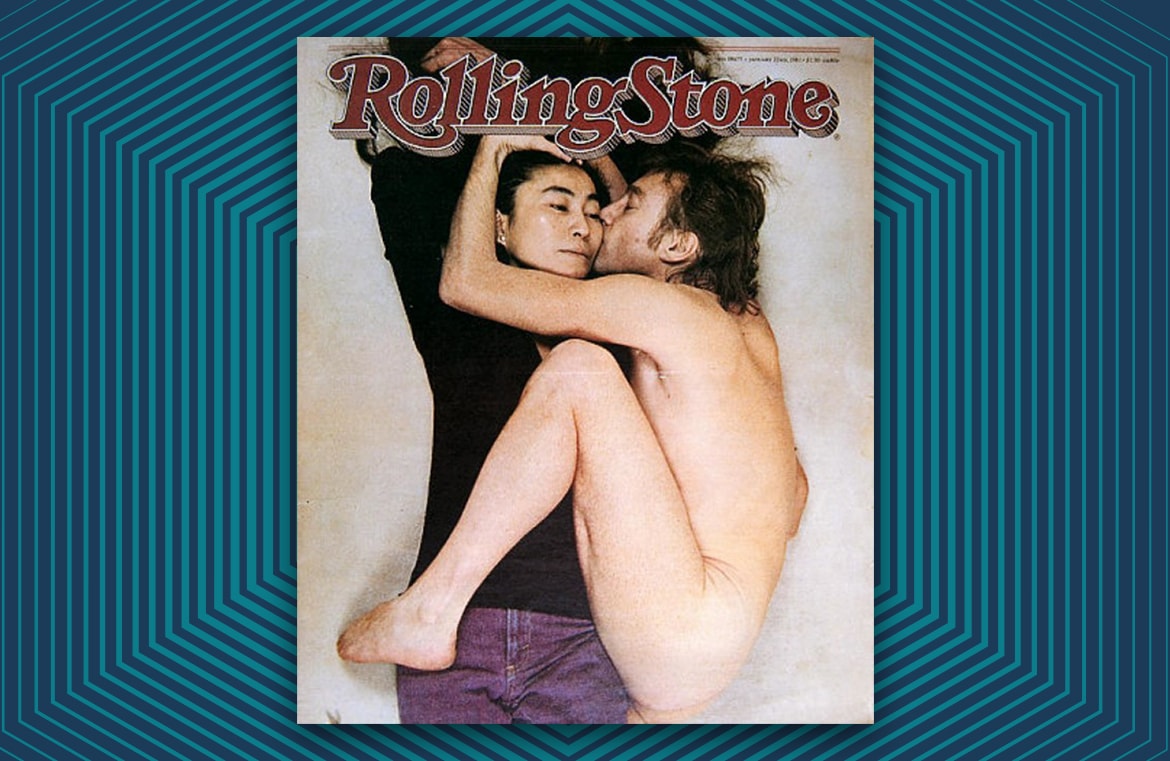 It was a piece of history. John Lennon pictured nude, curled around his wife, like a baby with his mother. The image captured the tenderness of surrendering oneself to the embrace of another, the loving intimacy that binds a couple. But the photograph would take on historic significance for another reason: a few hours later, John Lennon was murdered. This would be the last time he was photographed. 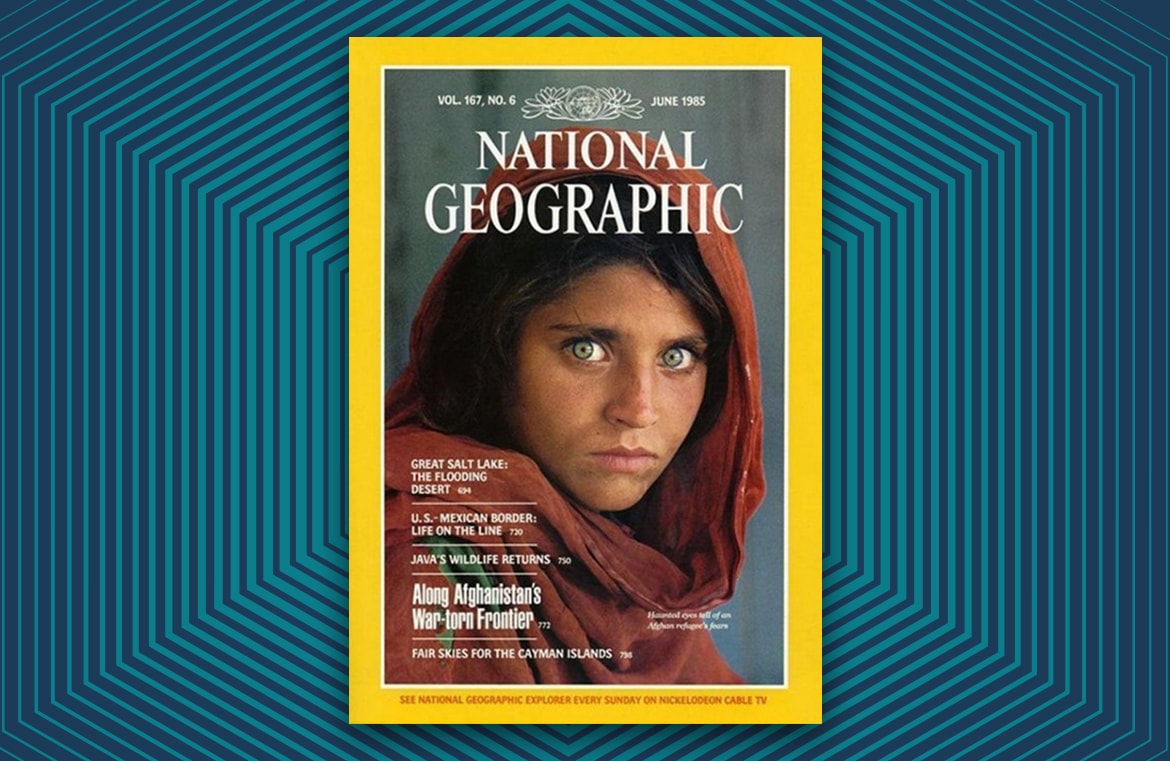 In a refugee camp in Peshawar, Steve McCurry photographed the face of Sharbat Gula, a 12-year-old Afghan orphan. Incredibly, the image was originally rejected by the magazine’s art director. It was editor Bill Garrett who realised its power and decided to publish it on the cover of the June edition. The ice-cold eyes of Sharbat Gula told millions of people around the world of the horrors of war.

The cover of August 1991’s Vanity Fair was courageous and controversial because it pictured a nude – and pregnant – Demi Moore. 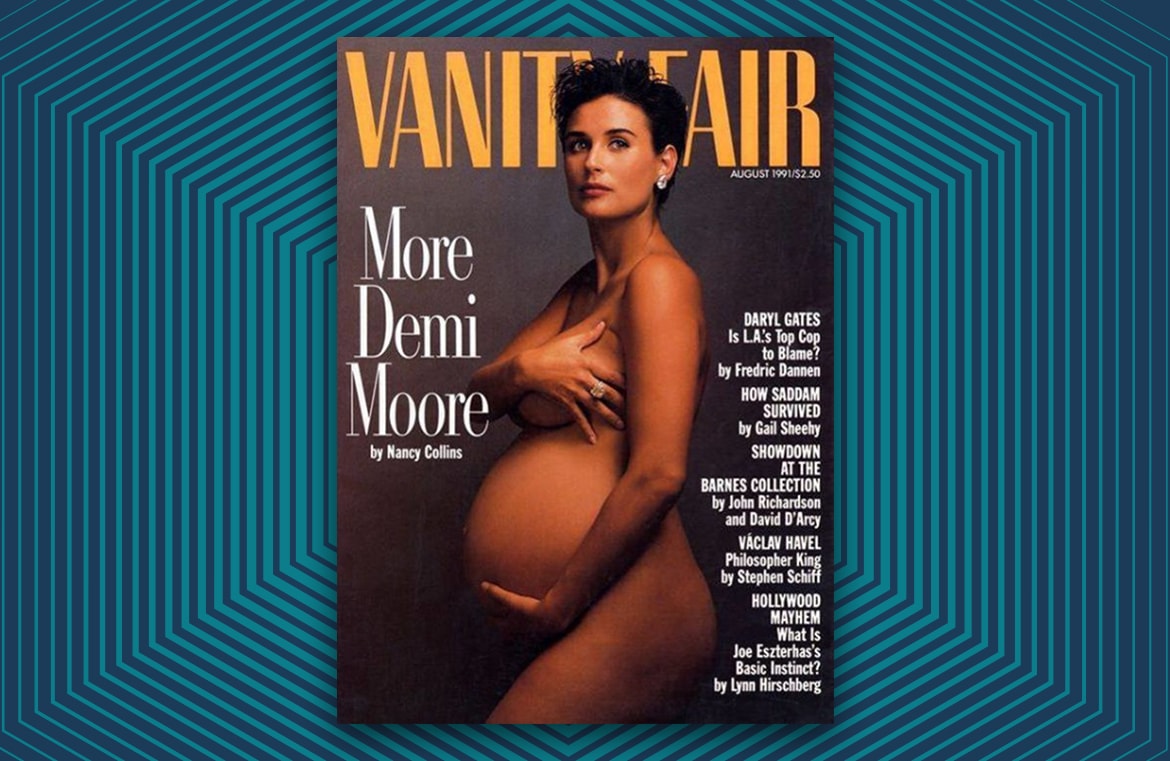 It was a deliberately provocative shot: at the time, the body of a pregnant woman was still considered taboo by many. But the magazine showed an image of a naked and sensual woman who was not afraid to show the changes in her body.

The New Yorker: the void of September 11

The covers of The New Yorker are renowned for the sophistication, elegance and astuteness with which they depict the nuances of the western world. And the cover foremost in our memory is dated September 2001.

It poignantly and powerfully portrays a watershed moment in contemporary history: the terrorist attacks of September 11. By turning out the lights on a symbol of western power, the image questions its invulnerability and captures the mood of fear and suspicion. The image created by Art Spiegelman and Françoise Mouly is strikingly simple: in the dark, we can just make out the outlines of the twin towers as two black and empty spaces. An illustration rather than a photograph was chosen because no photographic image could convey the loss and pain left by such a heart-wrenching event.