The period spanning the last two decades of the 1800s to the outbreak of the First World War was unique. It was a time of profound change in western Europe, the United States and Mexico. Unprecedented scientific and technological discoveries, new social movements (the second industrial revolution was well underway) and major developments in the arts and architecture improved the quality of life of entire populations in little over thirty years.

France’s baptism of this extraordinary era as the Belle Époque is down to a variety of socioeconomic factors. A republic once again, flourishing economically, and admired for its artistic and intellectual avant-garde, the nation seemed to have sufficient credibility and confidence to consider itself the world’s centre of progress, modernity, culture, entertainment and cuisine.
And then came the event that confirmed its status. The twentieth century’s first world’s fair, it goes without saying, was held in Paris from 14 April to 10 November 1900. The event turned “La Ville Lumiere” into an international showcase for all the achievements of the previous century. And what a century it was!

To this carefree and confident society, a hotbed of ideas and creative ferment came a further innovation of undoubted aesthetic and commercial value: the “affiche”. Literally a “bill”. Technically an advertising “poster”. At the time, Paris was home to around 200 theatres as well as countless dancehalls and other venues. Naturally, it was in the French capital that the first advertising posters were devised, used by venue managers to promote their events with the help of colour printing. The walls began to speak with optimism and joie de vivre, adorned with extremely beautiful and colourful posters. They represented a new form of communication, halfway between art and advertising.
Among the first to try their hand at poster-making were renowned artists of the day who, between paintings, would put their talents to less high-brow, but no less satisfying, use.

Notable standard bearers for the poster included Jules Cheret, Henri de Toulouse Lautrec and Alexandre Steinlen. Jules Cheret, a painter, illustrator and graphic designer, is still considered the father of the modern advertising poster. He had a novel ability to enthuse his images with movement and humour, drawing them in an original style which had its roots in postimpressionism and Art Nouveau. His famous ballerinas with their slim and sensual lines (the ancestors of today’s supermodels) and the curved, brightly coloured typefaces used to arouse the curiosity of passersby, embody the optimism and dynamism that permeated French society at the time. 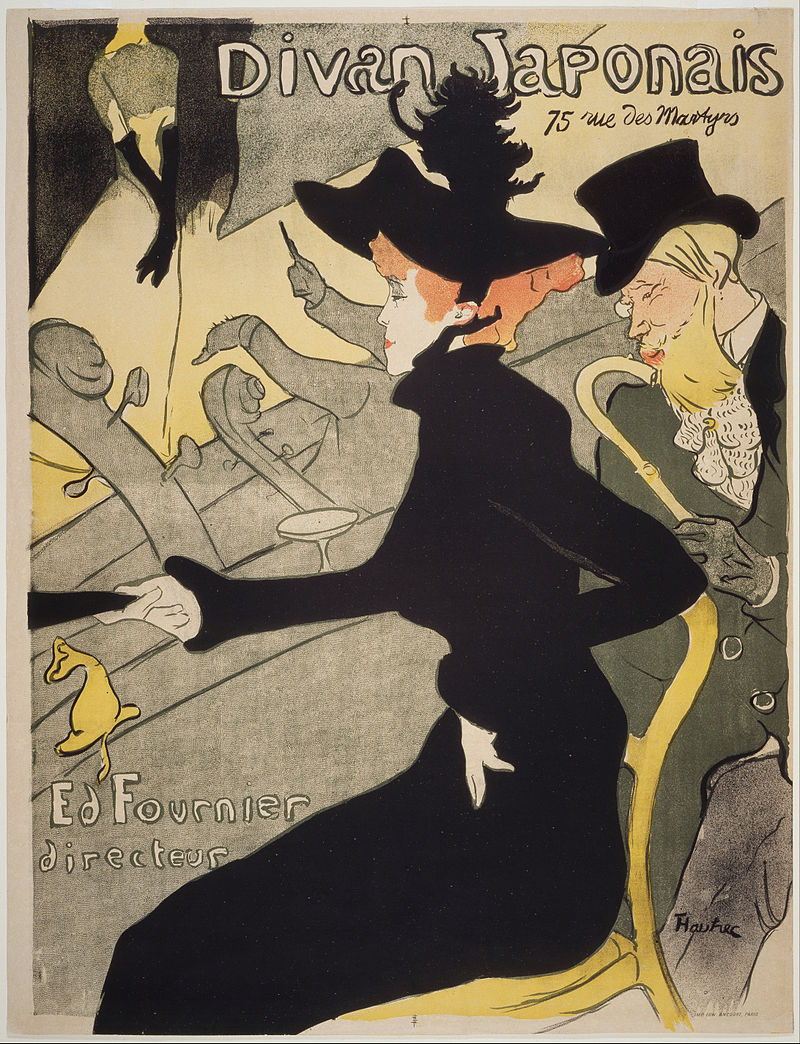 There is much to say about Count Henri de Toulouse Lautrec. His appearance (the result of a hereditary disease that stunted the growth of his legs), eccentric dress sense, and dissolute, non-conformist lifestyle made him a much-gossiped-about celebrity. None of which stopped him from painting absolute masterpieces. Unforgettable paintings and stunning posters which would immortalise the ballerinas and actresses who graced the stages of the Parisian theatres Lautrec loved to frequent.

The engraver and painter Alexandre Steinlen was an ardent exponent of Art Nouveau. Thanks to a prodigious talent for drawing, his elegant posters featured precise contours, vivid colours and graceful, dynamic forms. Ultra-famous is the poster he designed for “Le Chat Noir”, a cabaret in Montmartre where artists, poets, musicians and intellectuals would meet. As was usual among bohemians and cultural avant-gardistes of the era, these get-togethers had no other purpose than to chat and compare artistic visions over a glass or two. It is said that the installation of a piano turned Le Chat Noir into the first modern cabaret. Perhaps because of Le Chat Noir’s success, Steinlen almost always included depictions of pets in his posters, even when their presence was not strictly necessary.

The era of the poster also had illustrious fathers in Italy, where Art Nouveau was also known as “Arte floreale” or Stile Liberty, a translation of the “Liberty Style” which was spreading across Europe.
It’s here that the manifesto (right before and during the First World War) morphed into appearance and function as a propaganda tool. Its contents became similar in every country, the common goal is to recruit courageous soldiers to defend the nation. But that’s another story.

The poster’s Belle Époque coincided with the end of the actual Belle Époque, which came abruptly with the outbreak of the Great War. A period in which very little could be described as “belle”.