The Principles of Design

When you are creating a piece of graphic design work, without even being aware of it you will be using at least some of the Principles of Design. There are slightly differing views on exactly how many principles there are, but often this boils down to almost the same thing being explained in different ways. The principles of design are worth being aware of even if you have been designing for a while. You can use them as a mental checklist to ensure your design works well. 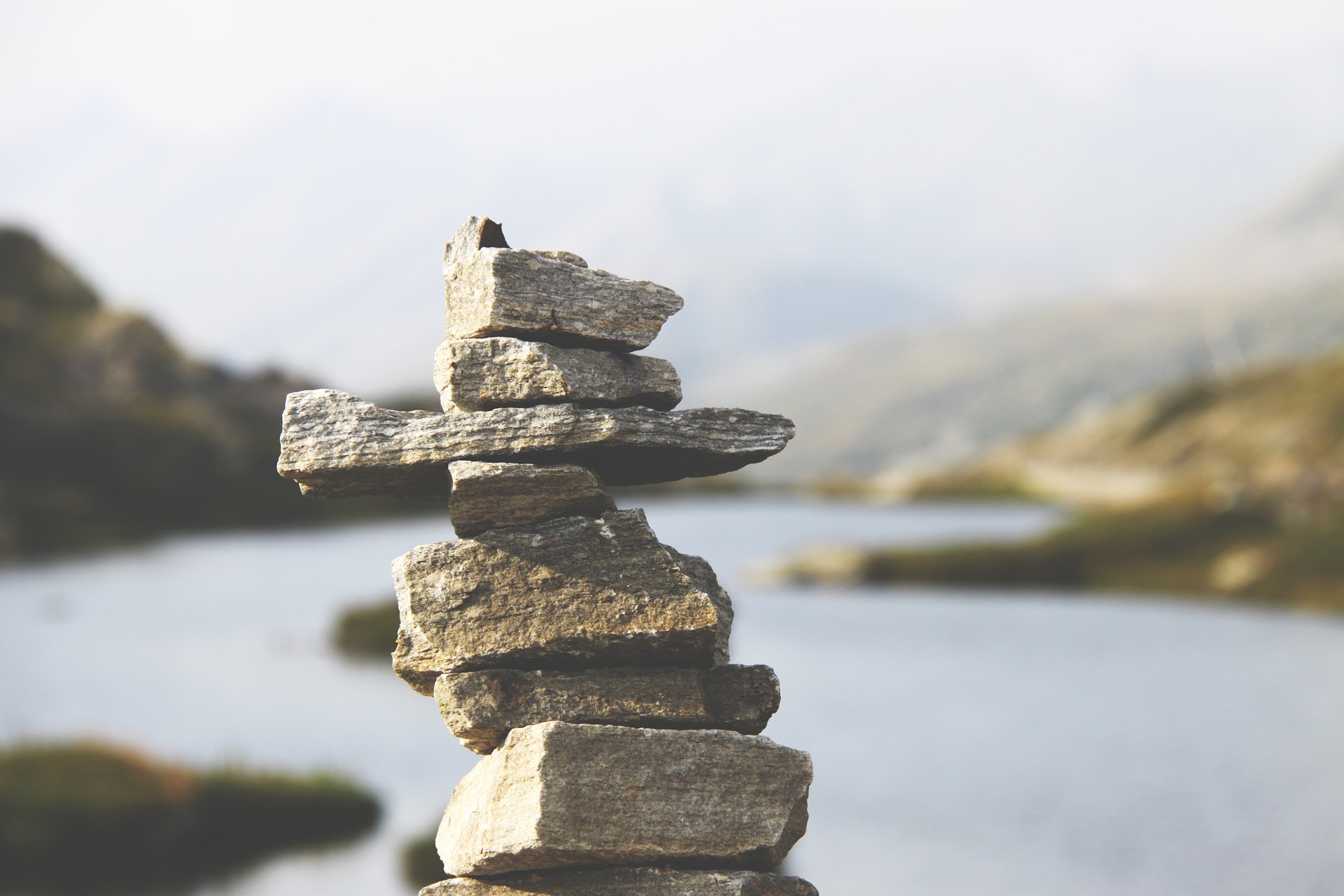 When you are placing elements on a page you want to ensure that they have a sense of balance. But you want balance without being boring! For example, you can achieve balance with a simple centred design like a photo with text and logo centred below, but it may look bland (unless your photo is stunning). An asymmetrical may look better.

Think back to when you were a child and you went to the park with a parent. When you went on a seesaw, the heavier person would have to sit much closer to the centre to offset their weight. It’s the same with graphics. A larger graphic can be balanced by a smaller one or block of text with the right placement.

Also, consider the effect that colour can have on the sense of balance. A small bright red square can appear to carry as much weight as a much larger pale grey one. So when you are working on a design and you are having trouble finding a sense of balance, experiment with changing the scale or intensity of some of your graphics.

For a more unusual way to balance your design, you could also look at arranging things radially. For example, if you had a series of photos and text you could fan them out around a central point.

Grids and rules are a big aid in creating balance within a design. If you create a grid with multiple columns you can always ensure that each of your design elements lines up with it. Of course, you can also purposefully break out of it if you want to create a deliberate sense of awkwardness or uneasiness.

If you’re struggling to get a design to balance, try leaving it for a while and then viewing it later with fresh eyes, or turn the page upside down and see if that helps you spot any issues. If that doesn’t work show someone else, even a non-designer. Sometimes they might be able to point out the problem or make a suggestion.

Whenever you work on a design you want to make sure all the elements of your design look like they are part of the same piece. So every part of the design should in some way relate to the rest, whether this is through colour, style or proximity.

Now in a perfect world, when you are given photographs by a client, they will all have the same styling/look. However, this is often not the case, especially with clients with smaller budgets who may use photos taken at different times or from different sources. In these situations, you have to think carefully about how you can pull the imagery together to help make them look the same. You might consider adding a filter or effect to all the photos or toning them in a certain way. Perhaps you could place them all in a certain shape, or use one type of photo for the large shots and the others for small.

Repetition helps maintain that sense of “unity”. When you are working on cover design concepts at sketch stage, consciously think about creating elements that can be used throughout the brochure.

For example, you might create a shape or symbol that is placed within an outlined circle. Imagine how you can use either the symbol or variations of it within your work. It doesn’t have to be used full strength, maybe as a watermark effect or something similar. But also think beyond that, could that outlined circle be used for your bullet points or within your page numbering? Or could a section of the circle be a graphic device for your headings? Rather than straight repetition, varying things slightly can add more interest.

When you are working on a design, decide what is the most important element. Sometimes that’s a hard decision to make, as your client might consider everything to be important.

The point of emphasis is, that once you have a person’s attention, anyone who is interested in that event, product or idea will read more, but getting that initial attention is critical.

You have no doubt seen one of the versions of the jokey video “make the logo bigger.” This refers to the inexperienced client who believes that the only way to get their name noticed is for their logo to be massive on the page. However, there are lots of ways you can emphasise elements of your design in more interesting ways. As well as scale you can make type bolder, make an element’s colour stronger or brighter or place more space around it.

Following on from Emphasis, once you have captured attention with your key element, you can vary the sizes and proportions of other elements on order of their importance. Proportion is not just about the size of an element itself but also the breathing space around it. You might also exaggerate the proportions of things for effect. Imagine for example a huge cut out photo with a tiny illustration placed to one side, but surrounded by white space. 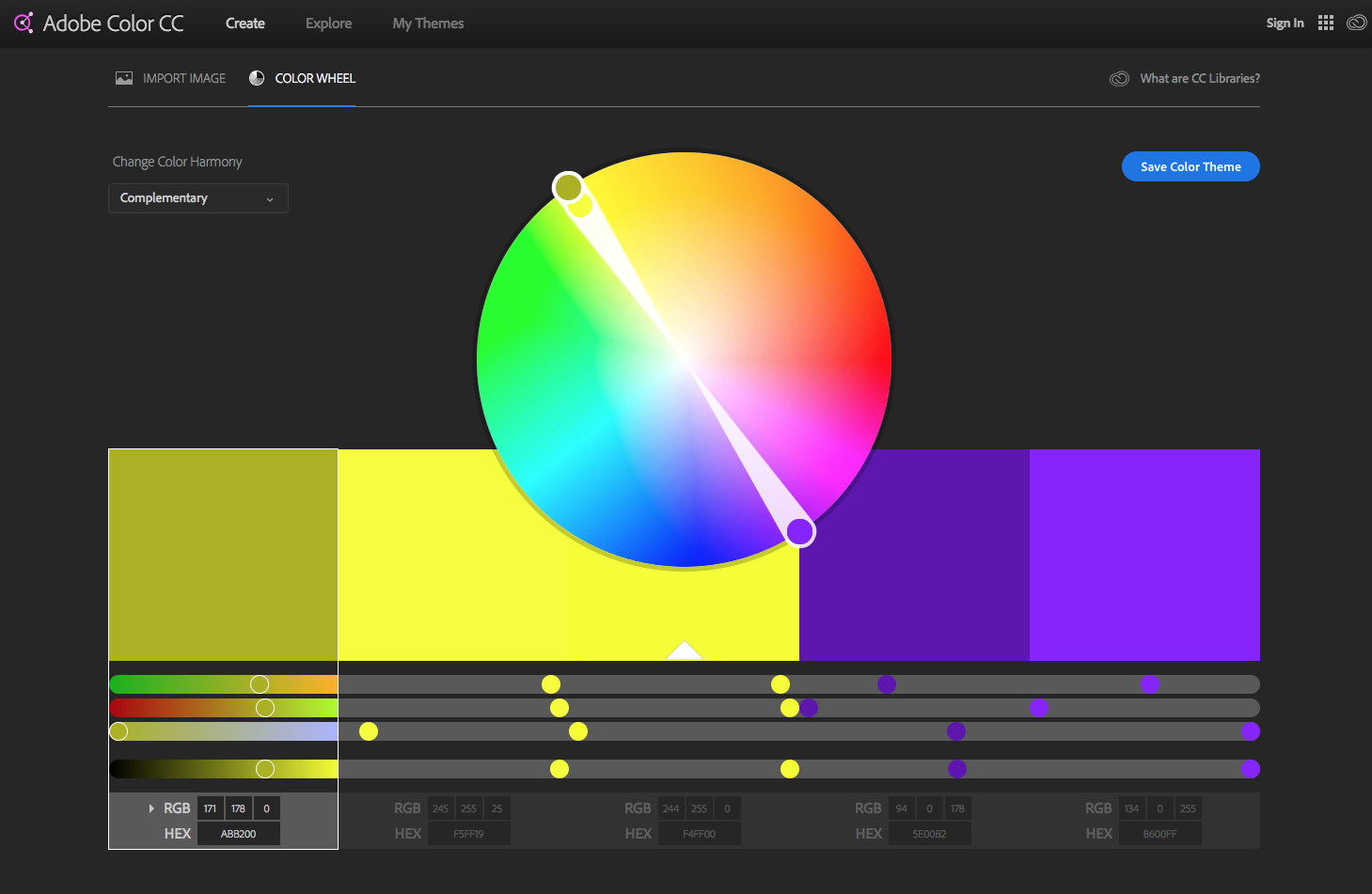 If you have a knowledge of colour theory, you might create a graphic in a colour and then use a contrasting complementary colour from the colour wheel to really make the graphic stand out. Adobe Color CC is a tool you can use to help choose complementary colours.

When you are choosing fonts, make sure you don’t pick fonts that are too close to each other in style or weight. This can end up looking like a mistake rather than conscious choice. If you’re an experienced designer you’ll know that a classic combination is to pair a serif and sans serif font and use them in your design. But, you can also experiment with other combinations, like script style fonts, used sparingly alongside sans serif typefaces.

I remember a novice designer asking me a few years ago “how do you know what fonts to choose?” I told them what I mentioned above, about making sure there was contrast, but that the rest was down to experimentation. Fortunately, there are now some tools that can help you pair fonts which contrast, yet complement each other. Take a look at FontPair which offers suggestions for pairing Google fonts and FontJoy. Interestingly FontJoy has a slider at the top which allows you to look for fonts with more or less contrast. 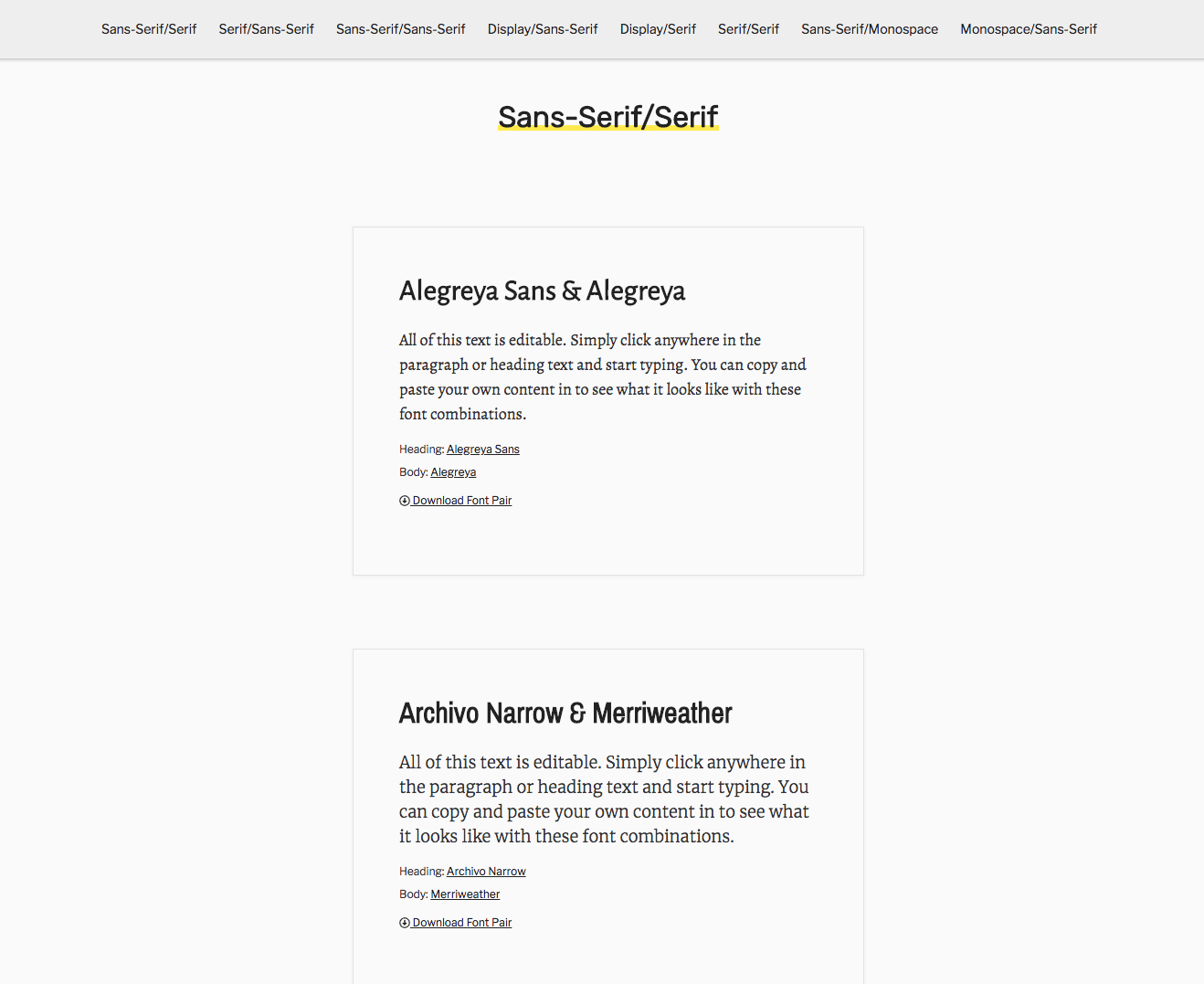 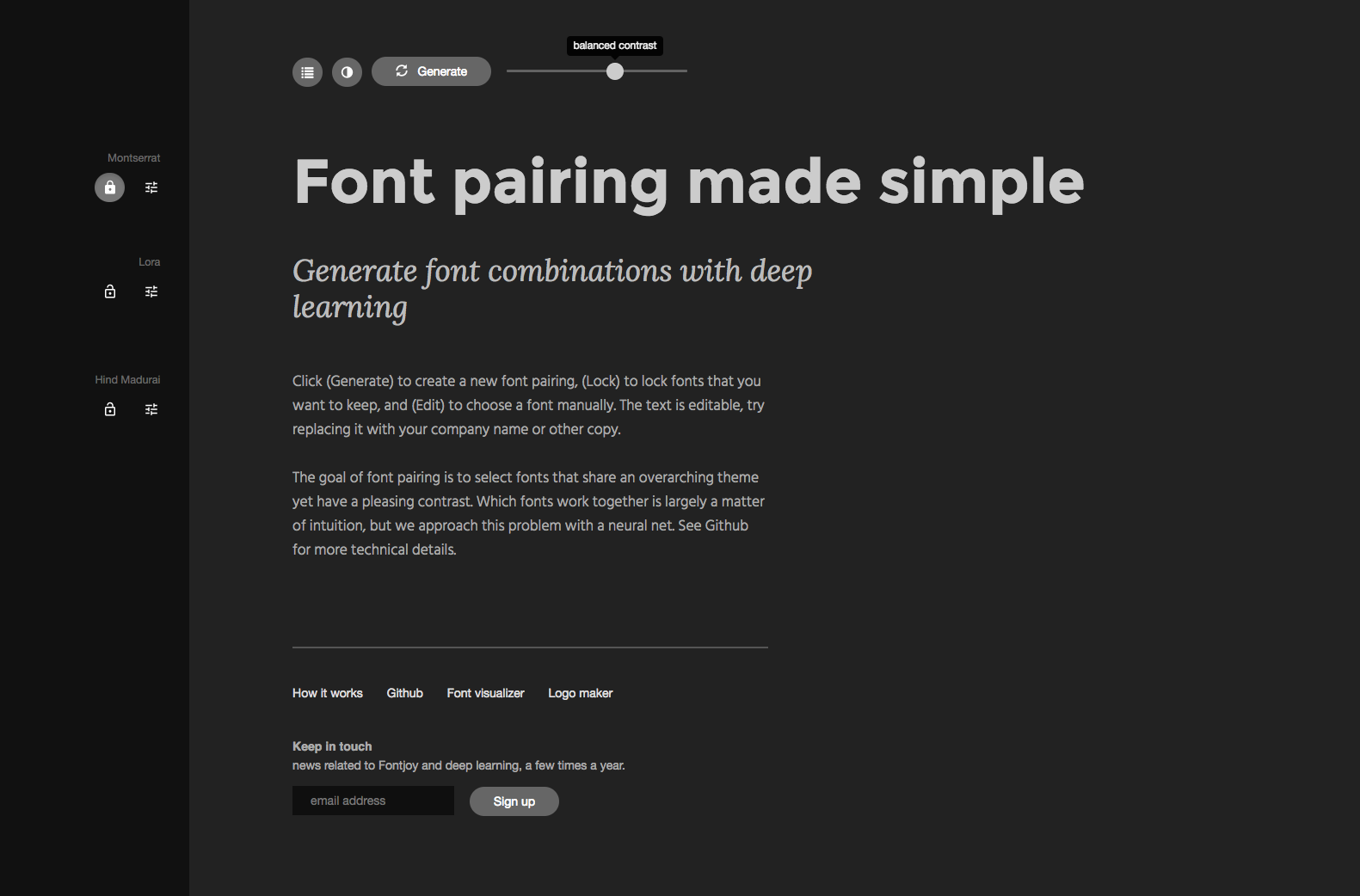 Once you have worked out the hierarchy of elements and decided on the most important elements, you need to decide how you lead the viewer’s eyes through the design. When we looked at “balance and alignment” I mentioned how boring a very basic centred design can sometimes look. This is because the eye is simply being led very methodically left and right. You want to create a design that leads the eye but in more interesting ways. You might build in devices like lines or graphics which join elements together or lead the eye to the next section in a more novel method.

With a less experienced client, there can sometimes be a battle to teach them that less is more, but it’s a battle worth pursuing. Most designers know the value of white space in a design. Often the more white space, the more expensive/upmarket the product or service is perceived to be. It can also make the text within your design more easy to read. Leaving white space around certain elements can help emphasise them. You can also experiment with using the white space (negative space) itself to create a shape.