To mark the 70th birthday of Topolino, the Italian comic that recounts the adventures of Mickey Mouse, we interviewed its director, Alex Bertani. Topolino may provide light entertainment, but it has always been a cut above the rest. We tried to get to the bottom of some of its secrets, and to discover what makes it the most famous and best-loved weekly publication in Italy. Enjoy!

70 years is an impressive milestone! Normally at 70 people are retiring, relaxing, enjoying the things they have built up over time and taking care of themselves, but it seems Topolino isn’t feeling its age, and is experiencing a ‘third youth’ – like a constantly smiling child with oodles of energy.

However, even Topolino must have seen this major birthday as an opportunity to take stock. After 70 years of stories, laughs, exploration and reworking of a world that has changed beyond recognition, what are the strong points that remain the same, ensuring its uniqueness and popularity? And what, on the other hand, has changed radically in the comic’s esteemed 70-year career?

Alex: A magazine like Topolino, which has been appearing on newsstands for 70 years, must ‘take stock’, as you put it, every week, and assess how much its readers are enjoying its content. The fact we have survived so many changes (70 years ago feels like a different world) shows we are capable of evolving and changing with the world around us, week after week.

Self-examination is an excellent ‘medicine’, which normally applies to people, but in this case it also applies to the magazine, which is also alive in its own way, part of a network of relationships.  Topolino has become a ‘classic’, part of the public consciousness, including those who perhaps don’t read it any more (which, incidentally, is a terrible idea…J) but who still know precisely what it is, what it offers and how valuable it is both in terms of entertainment and education.

We’re a printing company, so we might be a little biased, but… I think that reading Topolino, like reading a good book, is a privilege that should be experienced with all the calm and pleasure that only the deep, immersive reading of print on paper can provide. The story is fixed there, on an apparently static material, and yet, as soon as we look at it, it comes to life in front of our eyes, without the need for any links, furious scrolling or shares.

Does Topolino see this ‘miracle’ continuing in the future? Have you ever considered bringing your printed identity to an end? Have you sought to build new bridges and connections with your readers, which start on paper before expanding into the digital world? And what ecosystem are you developing for your readers?

Alex: Topolino, and comics in general, to be honest, have this amazing capacity to communicate, to take static figures and make them come to life in front of our eyes, to become a sequence and therefore create action, or take us on a journey… it’s magic. Comics can transport us to distant worlds and times, or simply help us see our current world more clearly. They can entertain us, thrill us and pique our curiosity.

Comics are all about brevity, using a modern language that blends words and images, turning something imagined into something visual. Perhaps that’s why they are proving more resistant to this time of great crisis in reading and the printed word, because more than other forms of reading they use modern, sophisticated and hybrid means of communication, full of references to other visual arts and forms of storytelling. 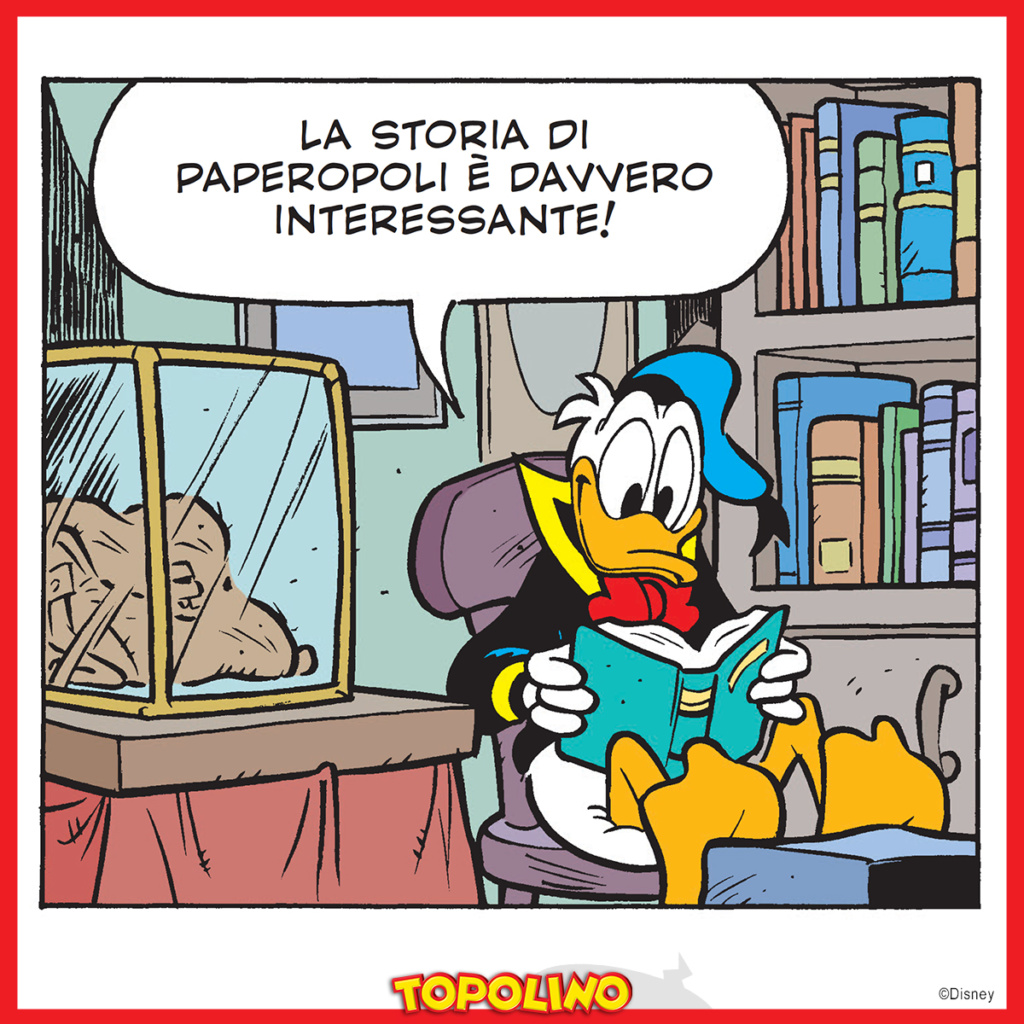 Moreover, comics (all of them, not just Topolino) still retain close ties to their printed identity. The experience of reading a comic is still very tactile, linked to the type of paper, the smells,  how the colours appear, and the product in a ‘physical’ sense. Experimenting with other directions has not got very far, at least for now.

I have always found Topolino to be an excellent tool for interpreting the world around us. Its stories always manage to include elements of contemporary life, inserting the characters in readers’ everyday lives and parodying or discussing current topics with tongue firmly in cheek. Now that you have to deal with ‘digital natives’ on the one hand and ‘mature readers’ on the other, how has your way of coming up with stories changed? Do you try to find the right mix of topics to speak to both, or do you aim more for a universal middle ground that touches everyone? How complex and stimulating is it to write for such different audiences and keep both of them happy? 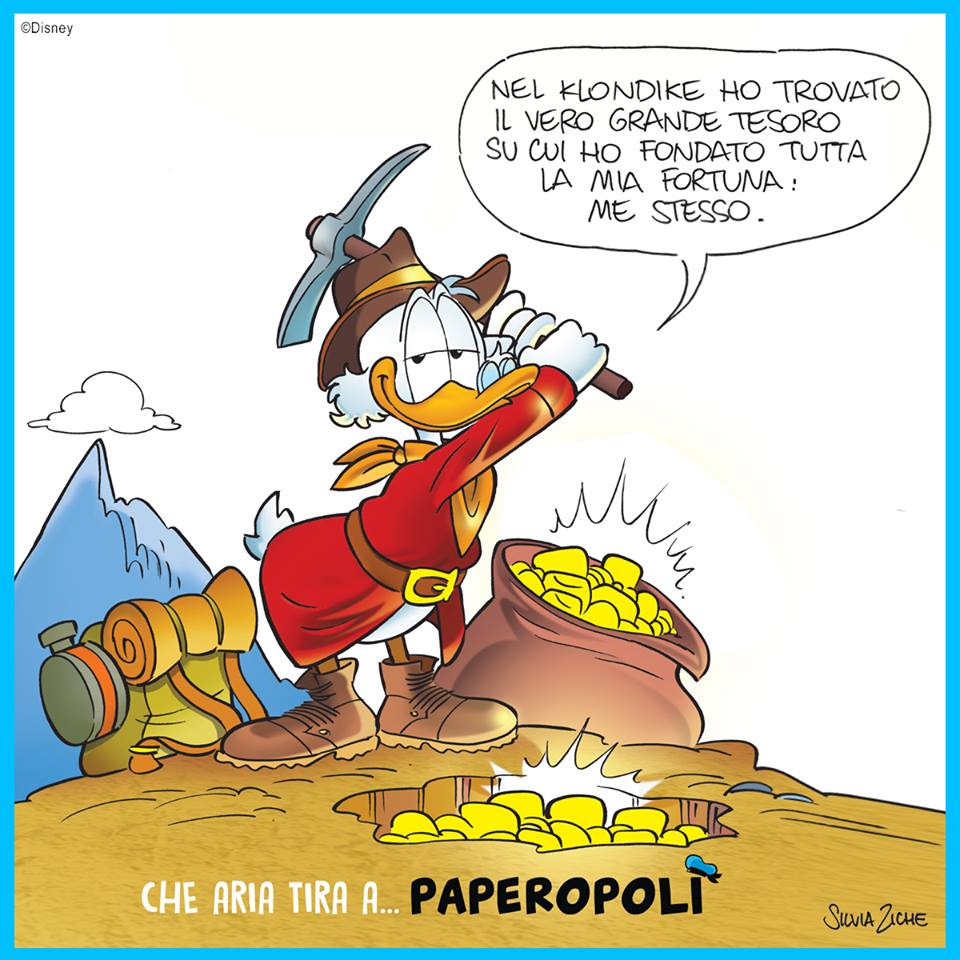 Alex: Topolino is a developing comic, constantly evolving and affected by various influences, changes in public attitude and technological developments. Over the years, it has always managed to introduce aspects that keep it relevant for the next generation. Having such a varied readership (half children and half adults) is a challenge that on paper may seem daunting, but it has become the bedrock of the comic… Perhaps, ultimately, it is this that gives it its great strength, its unique selling point, and its incredible communicative power, because over time it has forced the comic to develop contents that are accessible at different levels: a lighter, escapist level, involving gags and friendly characters, and another, more substantial level, perhaps not always evident on the surface, but which can deal with major topics and stimulate and inspire older readers. When you manage to pull this duality off, you’ve generally created a masterpiece.

Gaining confidence in the world

Today’s world offers particularly fertile terrain when it comes to ideas for stories – the narcissistic world of social networks, the problem of fake news, climate change and globalisation are just some of the potential ‘hot’ topics around at the moment. Given its tradition of educating its readers, does Topolino feel able to tackle and explain some of these topics in its own way? Is it ready to take on yet another challenge and explain to young and old alike what is happening in our world, including the most vague and complex of problems?

Alex: Topolino has always done this, but never in a didactic or overly direct way. Topolino mustn’t forget that its main aim is to entertain and amuse, although it has never shied away from tackling important topics facing our world, such as the future of our planet, green issues, bullying, social media and much more. 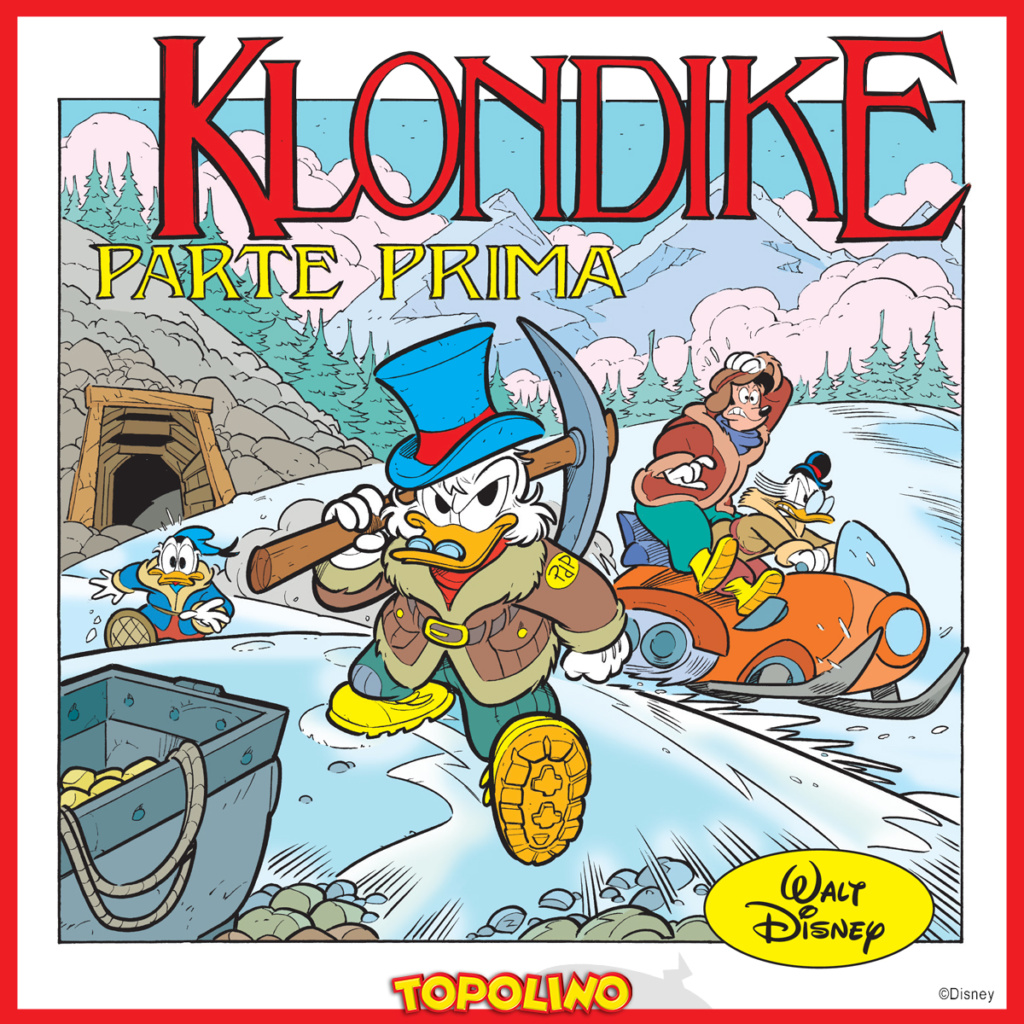 Many people say that they learned to read with Topolino. In reality they (actually, we) also learned much more; we started to gain confidence with the world around us, in a safe and protected way, something which unfortunately does not apply to many of the new forms of communication available to youngsters today, who are often left rather defenceless in the face of external stimuli. 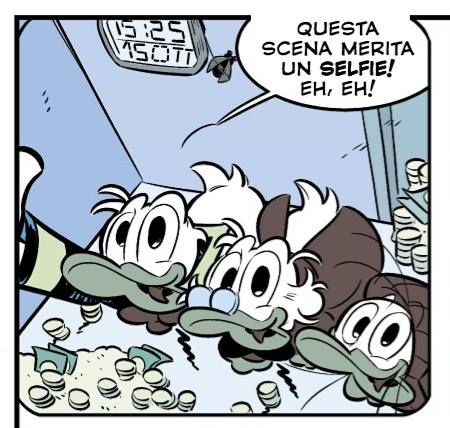 Topolino is both an imparter of knowledge and an educator! I like to think of it as an illustrated edition in instalments of the famous ‘coming-of-age stories’ of the past, texts in which young people took the various steps that lead to adult life. Does Topolino feel naturally suited to a teaching role? One of those particularly kind and easygoing teachers, with a knack for directing their pupils towards an increased awareness of themselves and the world? And as well as imparting information, does it still want to educate children by bringing certain important values to their attention? 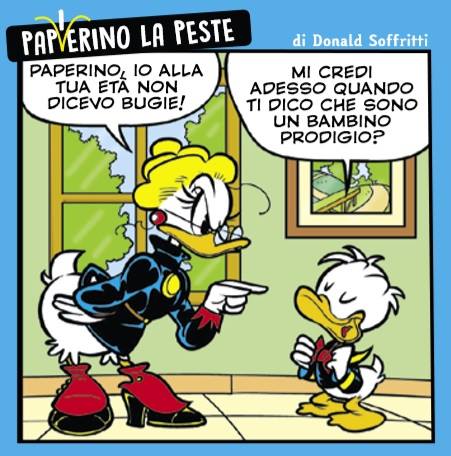 Alex: To be honest, Topolino is neither an educator nor an imparter of knowledge. Apologies for repeating myself, but Topolino is a publication designed purely to entertain and amuse. However, it has undoubtedly always been successful at combining its main aims with an impressive aptitude for informing and educating. The strong educational value that this weekly publication has gained over the past 70 years is undeniable, and it now forms part of its DNA.Young Topolino readers often seem to develop curiosity and an ability to think critically about the world around them, which are very useful ‘weapons’ for life in the current age.

A summer… of mystery!

Topolino is particularly suited to reading in the summer. It’s a special time of year, when parents and children can share stories on the beach, in the mountains or on the road. What can we expect from Topolino this summer? Are there any surprises on the way? Will there be any more free gifts, like the wonders we still guard jealously to this day? Can you give us any sneak previews? 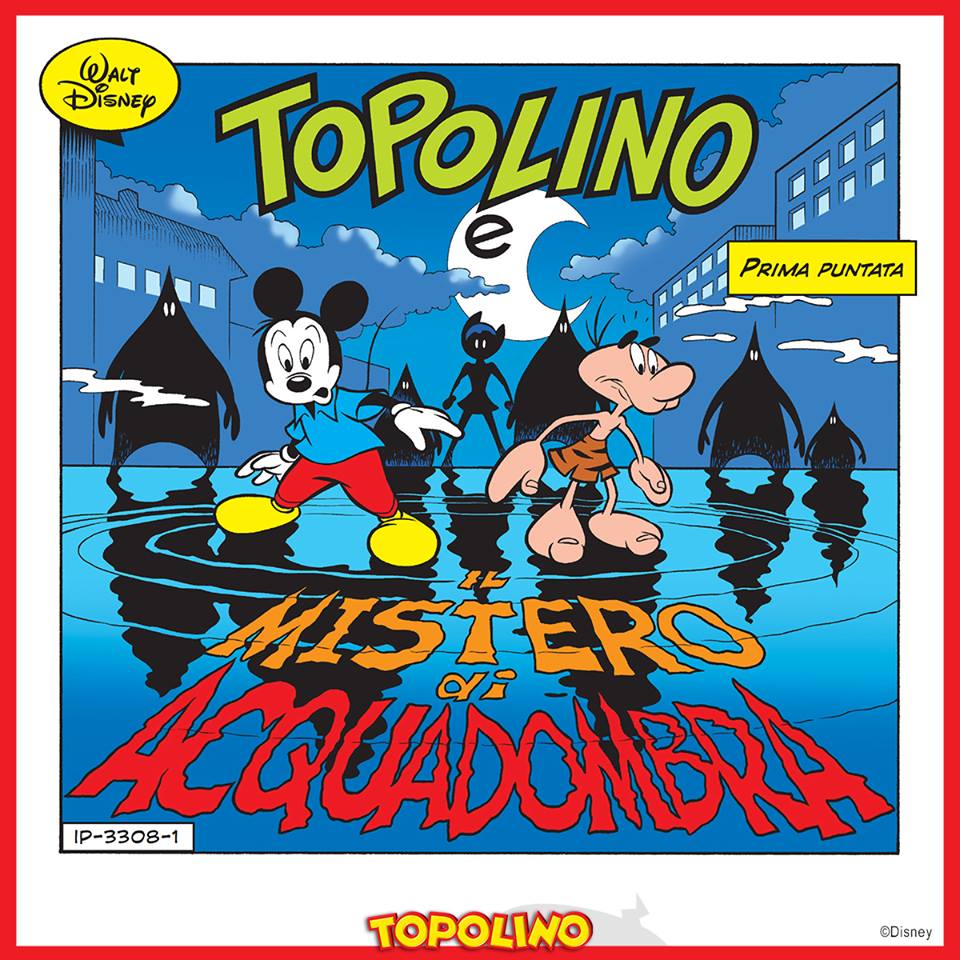 Alex: Topolino’s free gifts are something our readers clearly appreciate a lot. However, while years ago there was one annual major summer gift, they are now provided at regular intervals throughout the year instead.However, we do have a big surprise for magazine readers in summer 2019. A long saga in instalments that will last for the whole of July, and which, as well as Topolino, will also have some crossover with other monthly publications, such as Zio Paperone (Uncle Scrooge) and Paperino (Donald Duck).

It will revolve around a huge mystery and a sudden disappearance. Given the scale of the story, it will involve both the city of Paperopoli (Duckburg) and Topolinia (Mouseton), whose inhabitants will join forces to solve this intricate case together. The best part is that readers will be invited to take part and to help their heroes find the key and the solution to the mystery, and this will also enter them into a prize draw. Basically, get ready to dig out your inner Sherlock Holmes! 🙂

Branding in the restaurant sector

Packaging design: how to create a template for a box