Wrap advertising refers to the practice of covering, partially or fully, a vehicle with graphics for commercial purposes. The material used is usually vinyl, which is ideal because, being plastic, it’s relatively easy to remove and does not damage the paintwork, unlike painting and other techniques. The end result is essentially a mobile advertising board able to reach a much larger audience than static billboards.

The first commercial use of vinyl on a vehicle was relatively recent. It seems that, in 1993, Pepsi Co  was the first company to use the technique, covering a bus to promote Crystal Pepsi. In the following years, the technique was frequently imitated and but didn’t really take off until the 2000s, when technological advances in the production of vinyl made its application and removal even easier. As a result, it became ever more widely used as a covering for advertising.

Buses and trains are easiest to wrap because of their large, flat surface areas. They are also more effective in advertising terms because of their size and the fact they are means of public transport. That said, cars can be wrapped too, despite their curved surfaces.

You’ll find some notable examples of wrap advertising below.

2018: Absolut Vodka for the LGBTQ community

For Pride in London 2018, the Absolut vodka brand wrapped two buses with rainbow colours in a show of support for the LGBTQ community. The vehicles used, called digital buses, were fitted with screens that displayed geo-targeted slogans.

Absolut did not stop at the buses’ exterior, however, but also covered the backs of seats inside the vehicle. By scanning the QR code on the seat in front of them, passengers could make a donation to Stonewall, the organisation that fights for LGBTQ rights.

The Absolut campaign was created by Exterion Media in collaboration with Posterscope and Havas Media.

2017: Amnesty International for the Syrian conflict

In July 2017, the Danish advertising agency Robert/Boisen & Like-minded launched a 30-day campaign for Amnesty International using wrap advertising. The campaign wrapped a bus with the image of a Syrian tank to raise awareness of the desperate situation in Syria and the horrors faced by refugees. 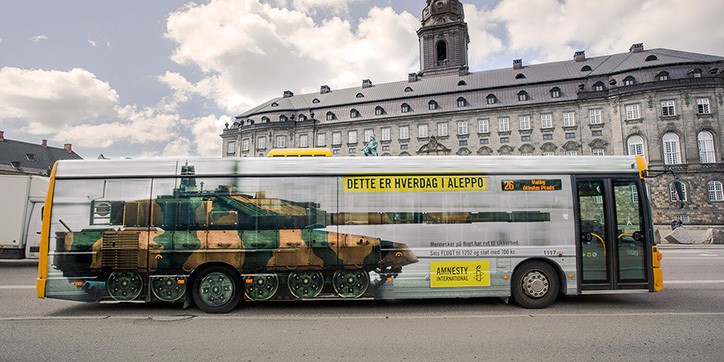 The image was accompanied by the slogan: “This is everyday life in Aleppo”. The campaign cleverly contrasted the peacefulness of Copenhagen with the instinctive sense of alarm triggered by seeing a tank.

For Christmas 2013, Valley Metro, the company that runs public transport in Phoenix, Arizona, commissioned advertising agency R&R Partners, also based in Phoenix, to create a fun and entertaining campaign to spread Christmas cheer over the festive period. R&R Partners developed a campaign that wrapped buses and trams to look like gingerbread houses with gingerbread men of different ages and genders at the windows to represent the diverse population that use public transport every day. As well as bringing festive spirit, the campaign was also aimed at supporting and raising awareness of the Tumbleweed Center for Youth Development, a charity that works with vulnerable and homeless young people by providing safe spaces for them to seek help. 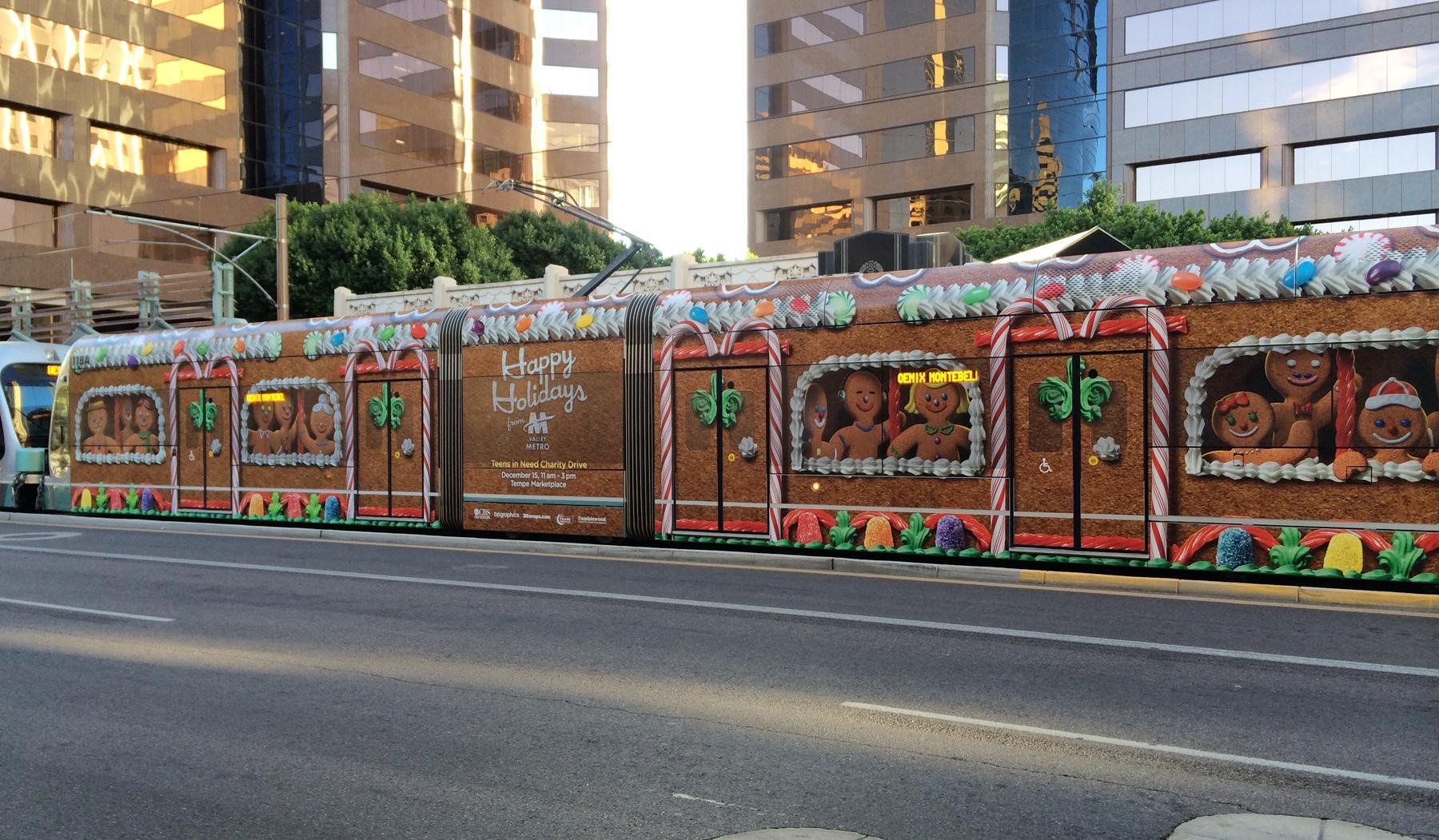 2016: the Danish Socialist People’s Party for the American presidential elections

Back in Denmark, for the 2016 American presidential elections, the Danish Socialist People’s Party wrapped a bus in a highly original ad urging Americans living overseas to vote. By also decorating the buses wheels, the party literally rolled their eyes at candidate Trump. 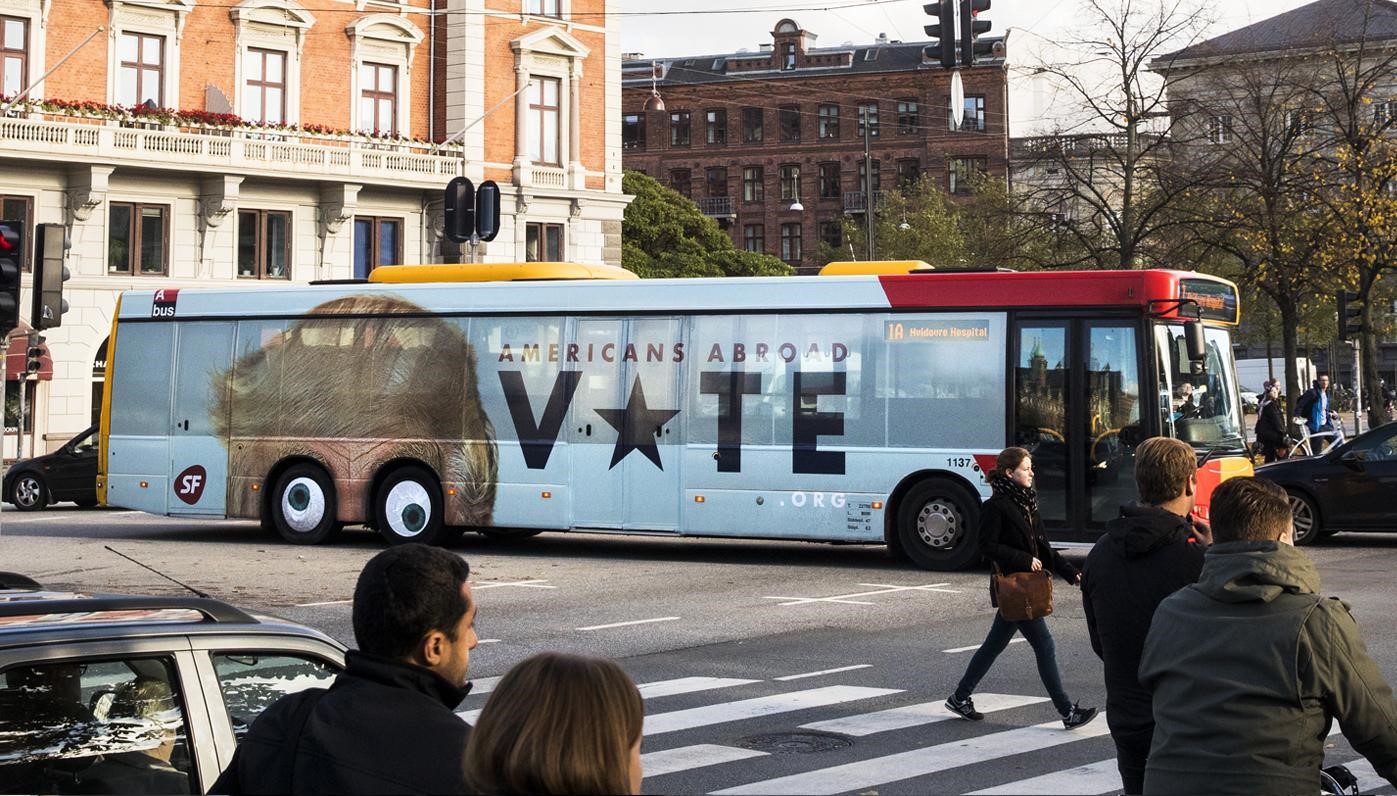 The campaign was devised by the agency Uncle Grey together with the Danish Socialist People’s Party.

To promote Copenhagen Zoo, in 2010 advertising agency Y&R came up with an idea that had a big impact on a small budget. They wrapped the bus in a high-resolution photo of the vehicle being squeezed by a boa constrictor to great visual effect. 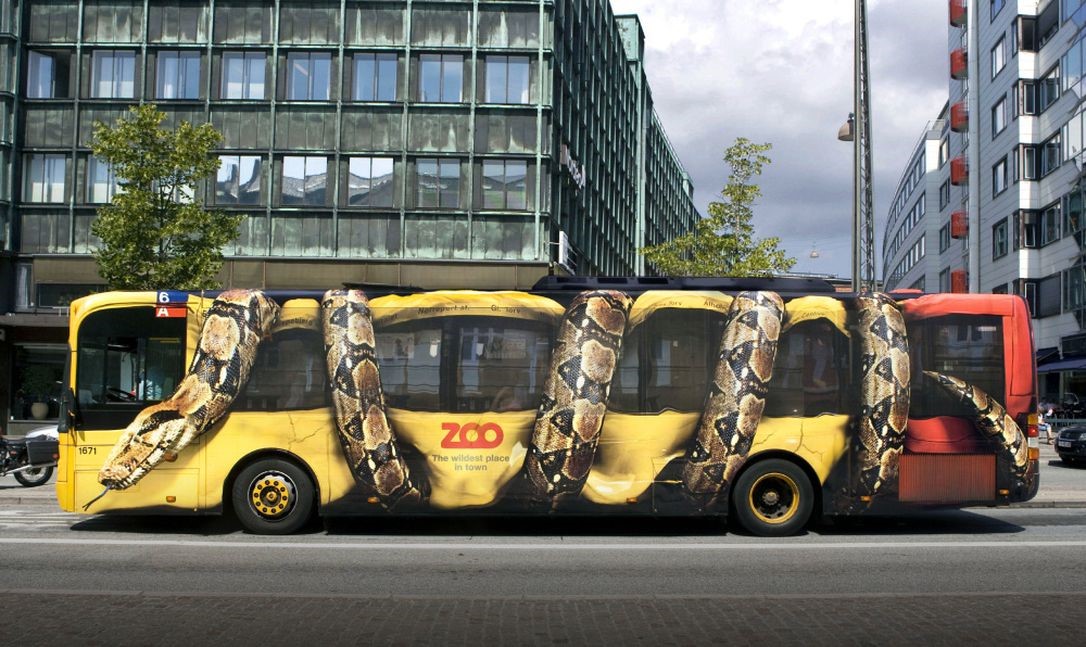 The campaign was so successful that it was extended to metro carriages, recreating a zoo inside them with vinyl images on the floor and walls. 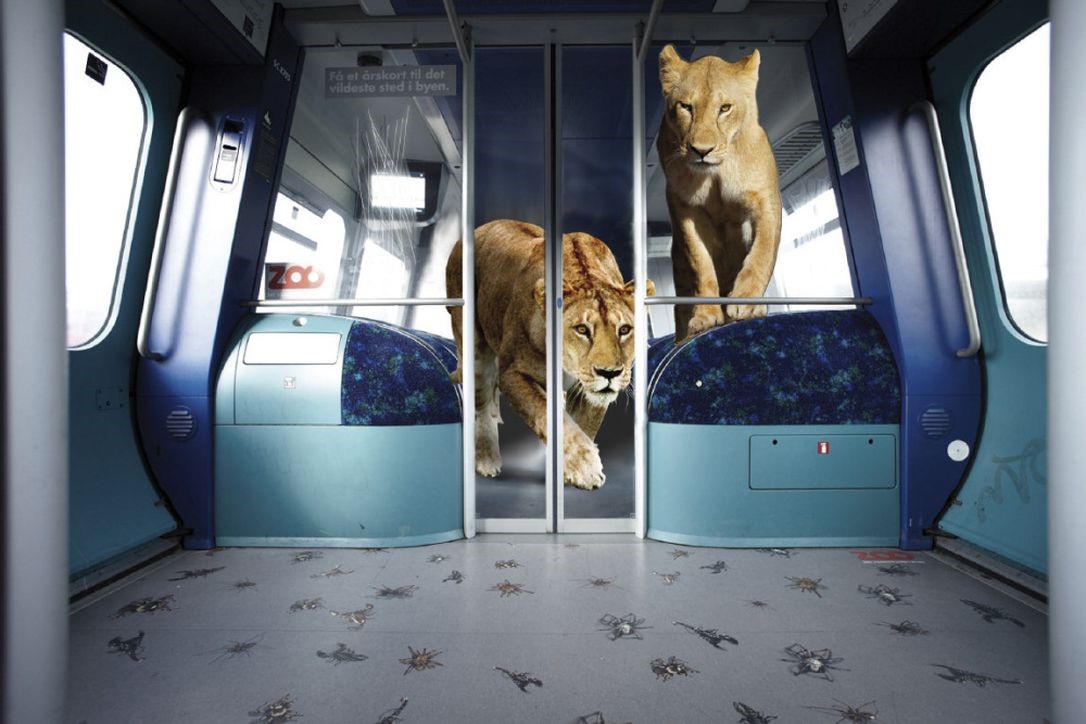