Is advertising really just about selling?

Advertising: if it doesn’t sell, there’s no point.  Right?

Advertising has always had the natural aim of promoting the sales of whoever commissions it. It seems self-evident. Yet this apparent obviousness does not convince everyone as it doesn’t fully account for all the roles that advertising has played over the course of its contemporary history. So much so that, when asked the question, “Is advertising really just about selling?” practitioners have for decades been giving somewhat contradictory answers. On the one hand are the marketers focused primarily on the hard sell – “If not to sell, what do we do it for?” – while on the other are the wordsmiths and graphic artists who have more progressive ideas about the potential offered by the language of advertising.

From analogue to digital. The debate rages on.

With the advent of digital technology, the advertising landscape has changed a lot. Today, communication professionals have at their disposal highly accurate and powerful tools for monitoring the impact of a message and tracking the actions that people take after seeing it. But the debate is far from over. If anything, it’s become fiercer, because the mountain of data available can be interpreted in completely different ways, depending on where you stand.

On the one hand, there is now constant pressure to create ever better performing content, with an attendant obsession over algorithms and numbers, which leads to a tendency to consider as “good” only those messages with high conversion rates that can generate clicks through to e-commerce sites.

On the other hand, something that many in the industry have known for years is becoming increasingly clear – and the data backs this up: today more than ever, to survive, a firm can no longer consider itself just a producer of goods or services. In an interconnected world, where even the most exclusive brands are in constant conversation with their target audience, and in a world in which it is easier than ever before to find information on the quality of a brand’s raw materials, its environmental record and how it treats workers, firms have to play a more active role in society: they must be fully aware of their responsibilities and the consequences of their actions.

Many studies show, for example, that in the purchasing process generation Z considers the values espoused by a brand as important as its products’ features, and demand transparency and social responsibility. That’s why advertising is about more than just the hard sell.

In this context, advertising can be used to:

• Demonstrate awareness of your social responsibility

• Show support for a particular cause

• Take a clear position on political or social issues

• Strengthen, through values espoused, relationships with a target audience

It’s advertising that doesn’t sell, certainly, but – as some would say – it helps people to buy or, in other words, to choose: to build affinity with a target audience, to strengthen relationships with the community, or even to generate empathy and a sense of belonging towards people who, perhaps one day, will become customers because they identify with certain messages. Let’s take a look at some examples.

We’re not going to decide here whether we’re for or against the values espoused by Italian national daily La Repubblica. Rather, it’s worthwhile noting how bold and courageous it is to openly promote values that are at odds with the current political climate; it’s a choice not often seen in an Italian context, which generally favours discretion that at times borders on ambiguity. It’s obvious that La Repubblica needed to reconnect with part of its readership: to do so, it has chosen to take a position on social issues, using a strident and at times provocative tone of voice that is bound to fuel debates online. 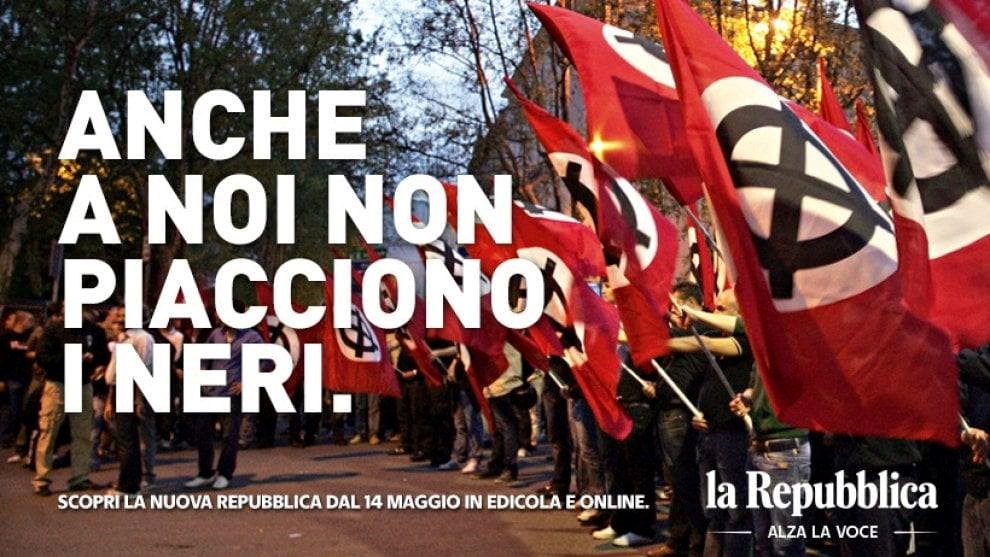 The ‘blacks’ referred to in the text are the so-called ‘neo-fascist brigades’ (also known as the ‘black brigades’). The tone is deliberately provocative, targetting those who don’t want ‘blacks’, meaning migrants, in the country. 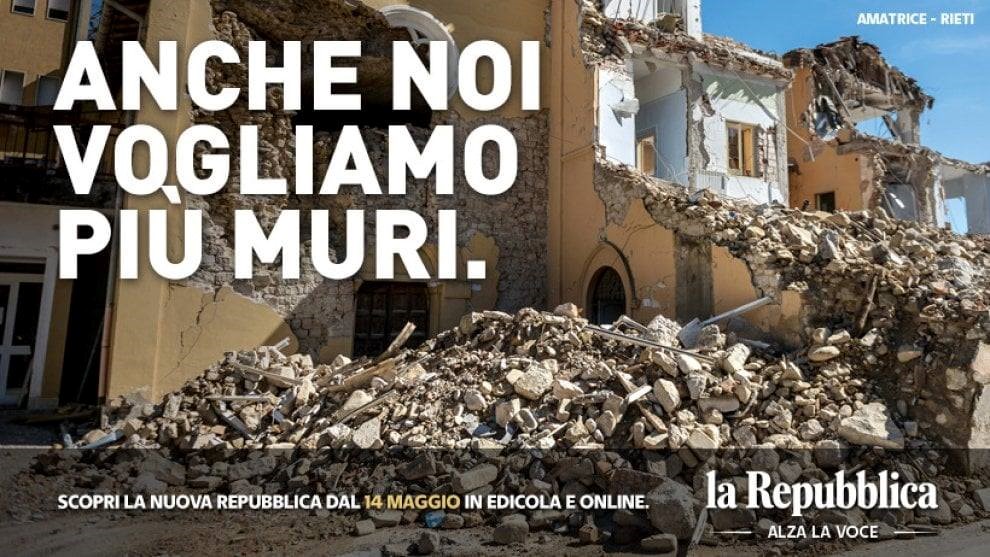 We want more walls too.

The ‘walls’ are those that need rebuilding in the Italian villages destroyed by earthquakes, as opposed to other walls erected on the borders of various European countries to keep out migrants. 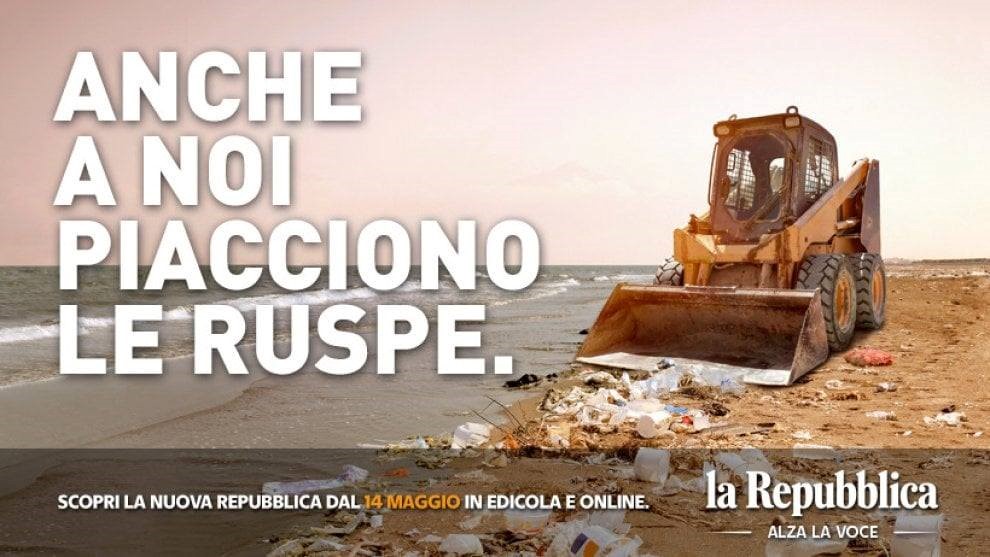 The ‘bulldozers’ are those used to remove rubbish from beaches, not those cited by a famous Italian politician, who often evokes them to symbolise order, strength and cleanliness.

“Will they sell more newspapers with this campaign?” we might ask. But the right answer is neither yes or no. In fact, it’s the wrong question, because the goal of these ads is certainly not to increase sales, but to reaffirm values, reconnect with readers, show a sense of responsibility and awareness of the cultural and social role that a newspaper publisher plays. In the long run, perhaps, precisely because it isn’t looking to “sell”, this campaign will ensure that La Repubblica is preferred by some readers to certain other newspapers based on shared values.

As social networks were taking off, when many firms and brands were taking their first tentative steps on Facebook, Ceres was cementing its place in the hearts of many. The brand can certainly be credited with taking on issues that had long been avoided in advertising: politics, current affairs, working conditions. These pioneering years saw Italy’s first real contemporary campaign explicitly encouraging people to vote.

Launched across digital and print channels, its tagline was: “First you vote, then you drink. Not like before.” Ever since, Italy’s most web-savvy beer brand has continued to use advertising to declare itself for or against certain things. The tone of voice is certainly humorous, but humour is used to speak out courageously on many hot topics which other companies hesitate to address. 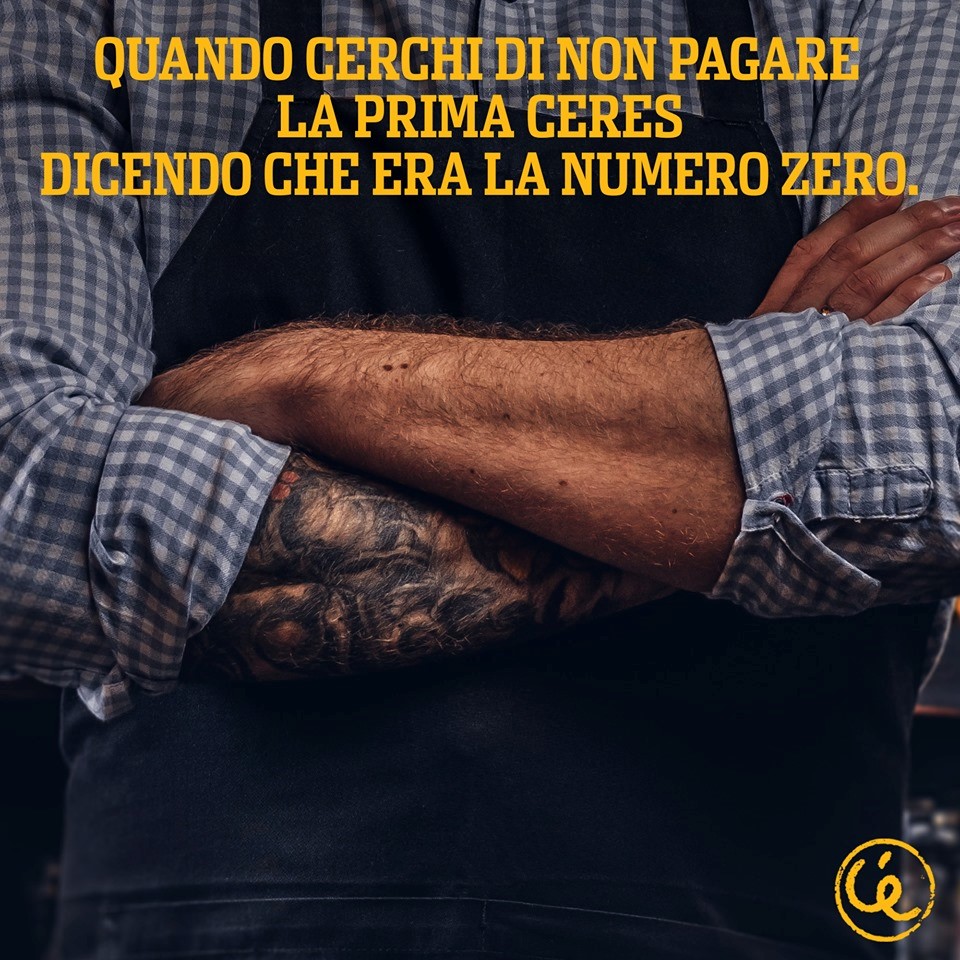 When you try to get away with not paying for your first Ceres by saying it was “number zero”.

Ceres openly pokes fun at the situation, using the idea that, having bought your first Ceres at a bar, you could use the excuse of the ‘zero beer’ to only start paying from the next round. This refers to the Italian Five Star Movement’s ‘zero term’. This party, now represented in parliament and temporarily in government, initially said that its politicians could not be elected for more than two terms in office. Later, unexpectedly, they said that the first term in power ‘wouldn’t count’ as it was an acclimatisation period, calling it a ‘zero term’. Unsurprisingly, the announcement was met with astonishment and ridicule, given the apparent inconsistency of changing the rules as they went along.

Again, asking whether the content of a particular campaign will increase sales is to not fully understand communication today. No, the message is not aimed at selling, but is the direct expression of a brand that, before many others in Italy, understood how to read the shifts in society and tap into the sensibilities of new generations. That’s why it has chosen to get closer to its target audience by showing that it is fully aware of the role companies are expected to play in society today. And that’s why, over the long term, it’s winning the reputation war.

Over the years, many other brands have followed the trail blazed by Ceres. From this perspective, two of the most interesting Facebook pages are those of Taffo funeral directors and Skipper fruit juices: both post content that is to varying degrees irreverent and compelling and shares one thing in common: they express social values and responsibility through humour rather than trying to sell. 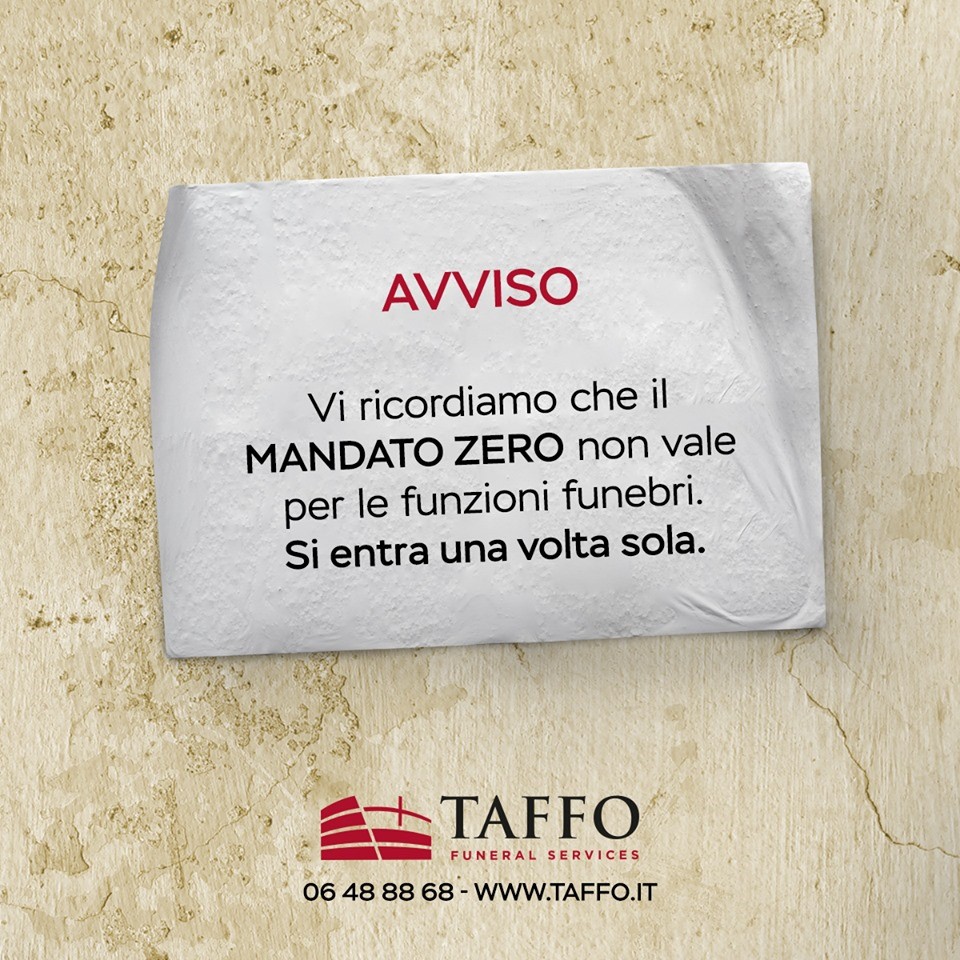 Don’t forget that the ZERO TERM does not apply to funeral services. You only go in once.

Similarly, Taffo, with its irreverent humour, reminds readers that the funeral service does not offer a “zero term”. You therefore cannot change the rules as you go along, because a funeral is “definitive” and cannot be repeated. 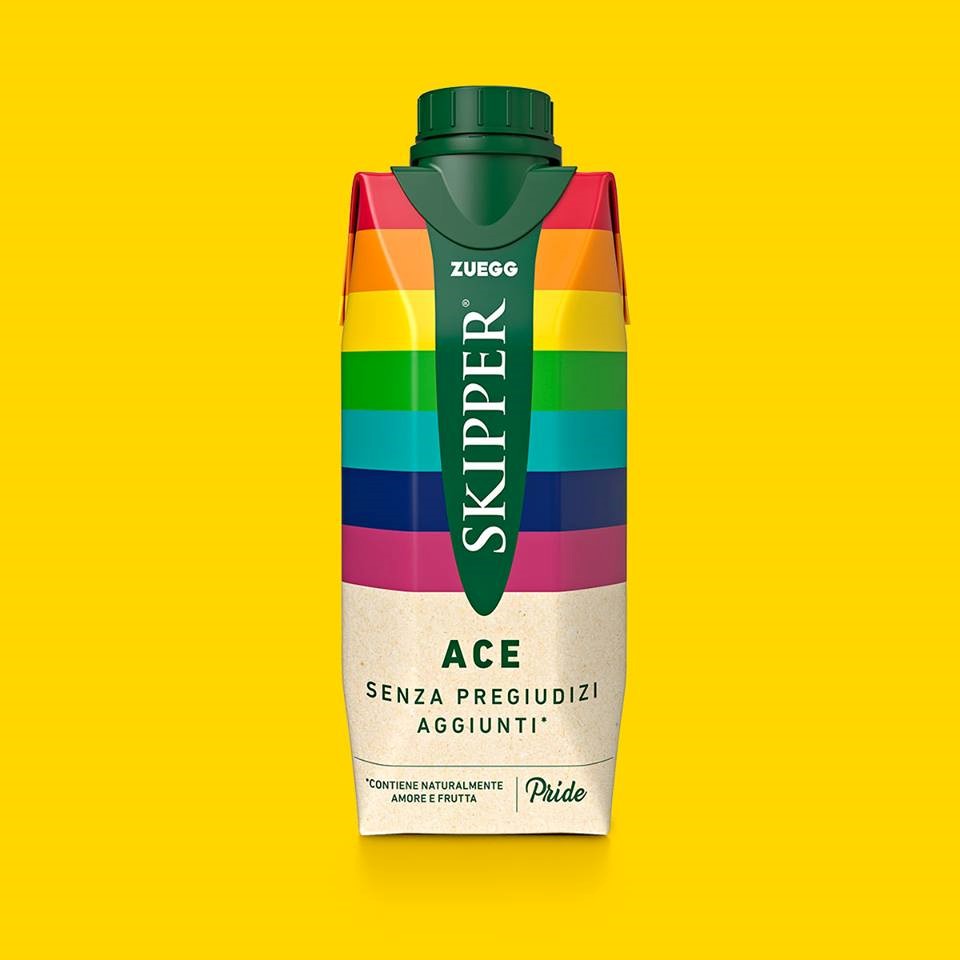 Skipper, meanwhile, chose to openly promote the LGBT Pride event by giving its juice packaging a rainbow-coloured design and adding the phrases “no added prejudices” and “naturally contains love and fruit“.

Huawei. When advertising sells nothing but values

Just recently, Huawei released a video advertisement encouraging the responsible use of technology. The video highlights the negative consequences that smartphones can have: it’s empathetic, compelling and highly emotionally intelligent, yet it raised eyebrows among some advertising professionals. “But why draw attention to the possible negative consequences of the product?” they wondered.

Indeed, this fascinating case history provides a perfect opportunity to reflect upon the implications of communication in today’s world: until we grasp the idea that a company – however large or small – represents much more than a manufacturer of products to sell, we will never fully accept that we can and must invest money in communication that expresses values, political stances and support for causes. But if, on the other hand, we accept that in today’s landscape a company is perceived by the public as an entity that is connected to communities and responsible for its choices, then it becomes easier to see why advertising, very often, can and must talk about values more than products.