Artist’s books: when a book becomes a work of art

While an art book is a generic term referring to any publication relating to art (such as catalogues, monographs written by artists, essays and art criticism), an artist’s book is a work of art in the shape of a book. Sometimes it is the book’s form that inspires the work, and other times it is its function. Some artist’s books use sophisticated forms of printing, layout and binding to create genuine art objects (or book objects, to be precise), while others have a conventional form, but an innovative way of presenting the contents. Sometimes they are limited editions with just a few unique copies made, while at other times they are produced in large numbers so they can be distributed cheaply.

An artist’s book can therefore take various forms and be distributed in various ways, from the most traditional to the most experimental; what distinguishes an artist’s book from any other publication is its ability to destroy any preconceived ideas regarding a book’s essence, form and function.

Since the first printed books appeared in the fifteenth century, artists have had an active role in illustrating them. However, books as true art objects didn’t appear until the twentieth century, with the advent of the avant-garde. The Futurist artist’s books are a case in point (you can see some famous examples in this article.

Here, however, we have decided to concentrate on the changes that occurred in the second half of the century when, particularly from the 1960s onwards, artist’s books went from being elite objects to a ‘pop’ form of communication. The examples shown below certainly do not provide a complete picture of the countless extraordinary forms that artist’s books have taken on in recent decades, but they have been chosen to demonstrate a range of approaches and to inspire you to find out more about the phenomenon.

Since the 1950s, artists in Europe have experimented in particular with the format of the book, creating works with a range of different bindings and printing methods. One artist who worked a great deal on the book format with incredible ingenuity, creativity and inventiveness was Bruno Munari. Starting in 1949, Munari began creating a series of unreadable books, in which he investigated the shape of the book and the how it is used, abandoning textual content in favour of exclusively visual communication. 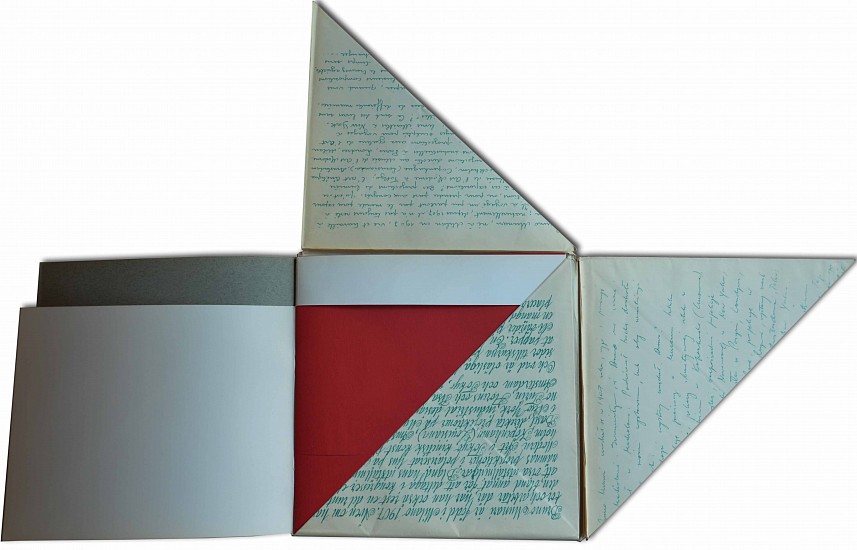 One of these is Quadrante Illeggibile Bianco e Rosso (Illegible White and Red Quadrant), which comprises 40 sheets of white and red card in various shapes, with the viewer presented with a new combination on each page. The book jacket is a sheet of paper folded several times to form a system of triangles, with a short biography of Bruno Munari translated into eight different languages.

Another European master of the artist’s book was Swiss artist Dieter Roth, who began creating books using the printing techniques he learned while working for an advertising agency, before becoming more innovative and radical in his art. He printed all sorts of content (concrete poetry, newspaper articles and abstract shapes) on plastic and other cheap materials, and even added food to his books.

Little Tentative Recipe is a miniature book, cubic in shape, inside a box that once held teabags. It contains 800 offset colour prints created by students at the Watford School of Art, following the instructions (recipes) provided by Dieter Roth.

Meanwhile, in Los Angeles, in the United States, Edward Ruscha was also creating books as works of art, but following completely different rules: cheap, commercial printing, large print runs, no signature and accessible prices. Indeed, Ruschia, with his series of books that contained nothing but a series of photographs on a specific topic, revealed in the title on the cover, was a pioneer in the history of artist’s books.

The artist’s aim was to make his work as cheap, accessible and easily transportable as possible, taking art from museums and galleries onto the streets.

One of the simplest and most rational examples of conceptual art in book form is the work Libro dimenticato a memoria (Book forgotten by heart) by Vincenzo Agnetti, in which the majority of the pages have been removed, leaving only the margins. 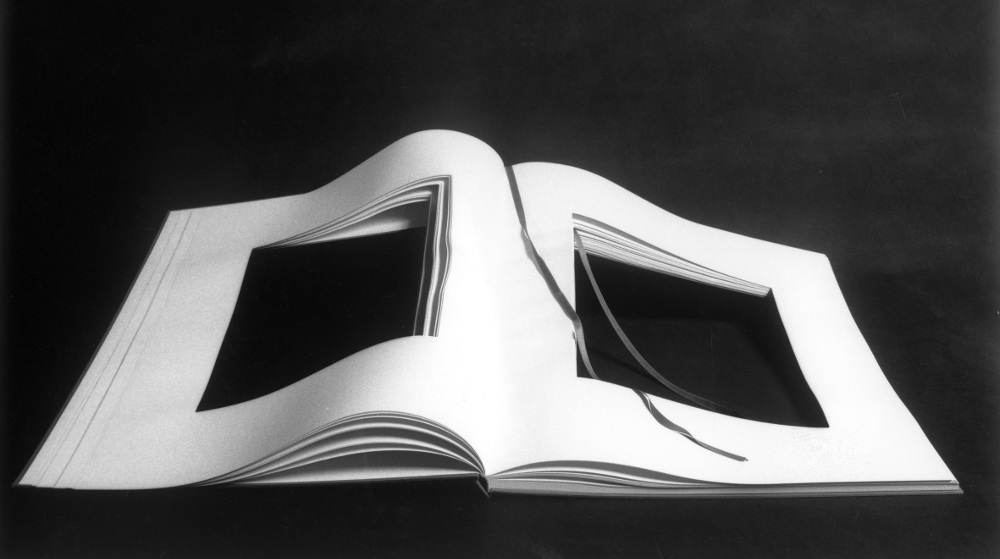 The book is a metaphor for the paradox of memory: only by forgetting can one leave space for learning about what is to come.

With the experimentation of the 1960s long since passed, the book, in the midst of the digital age and decades after the first announcement of its imminent death, is once again a medium being explored widely by artists.

Indeed, it is thanks to the new ideas, techniques and (self-)publishing opportunities provided by the digital and online world that the artist’s book is making a comeback. Speaking of which. 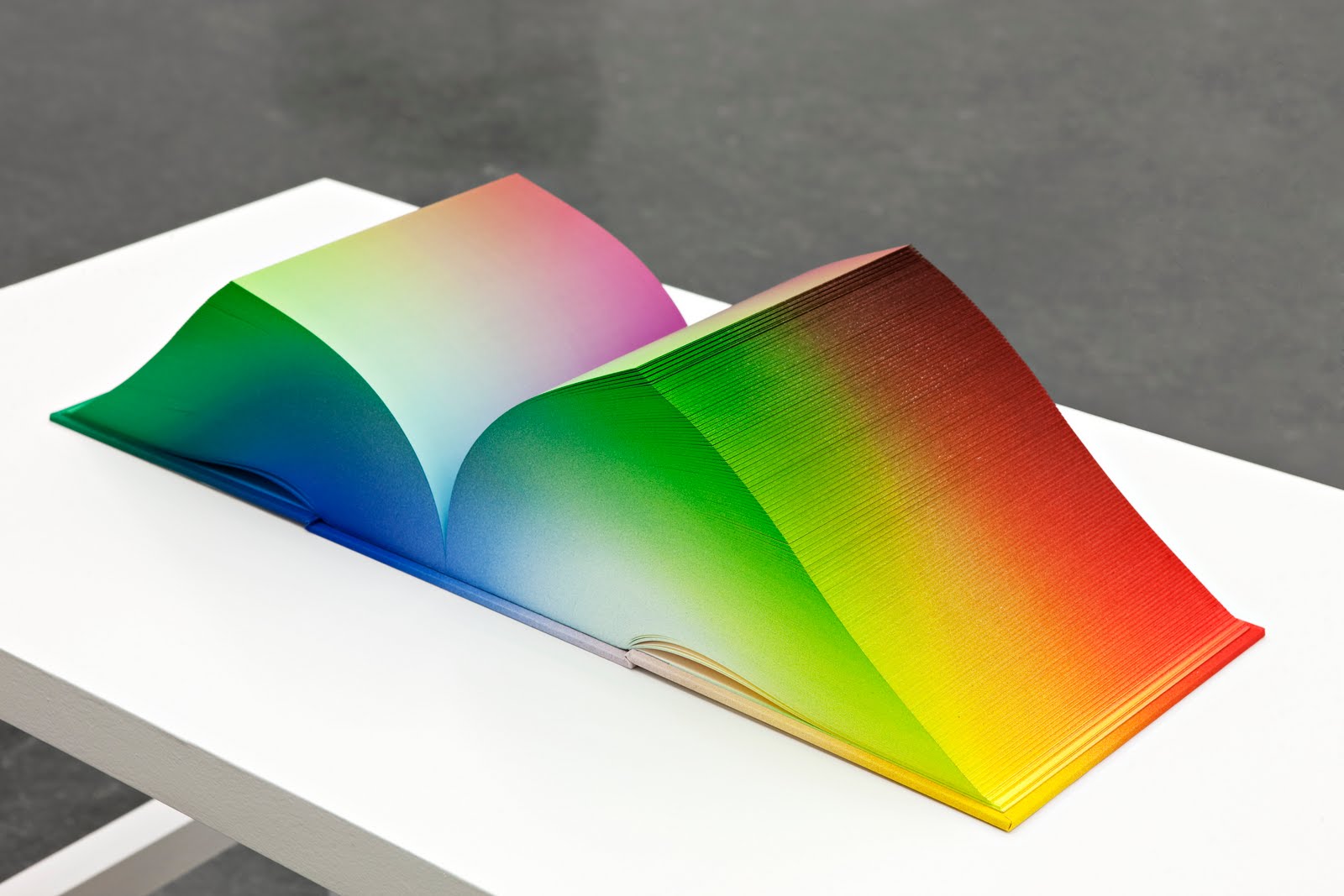 The experiments conducted by Tauba Auerbach, an American artist who divides her time between New York and San Francisco, are extremely interesting. RGB Colorspace Atlas is a book in the shape of a cube that, as the name says, depicts every possible hue in the RGB array of colours: a colour model designed for screens.