COPYWRITING: THE EVOLUTION OF PUNCTUATION

Punctuation: a tool for effective writing

When talking about copywriting, we shouldn’t overlook the importance of punctuation. Using full stops, commas and other punctuation marks correctly can really improve the effectiveness of copy in a company brochure, blog article or advertisement. In this article, we’re going to go beyond the basics and explore some ideas that apply specifically to copywriting.

The full stop in advertisements

Let’s start with the full stop: it’s probably the punctuation mark that is most surprising and has undergone the greatest evolution. The first thing you need to know is that the traditional school of advertising calls for the use of the full stop at the end of every headline. It’s a decades-old convention. The reason? Advertisement headlines don’t stand alone, but are part of a larger message that includes images. While newspaper headlines can stand alone without images, headlines in advertising have a close relationship with an image (or “visual” in the jargon). The full stop indicates that the sentence is part of a wider message that also includes images.

And while it’s true that in the early noughties some advertising agencies interpreted this rule with a certain degree of flexibility, it’s also the case that until the digital revolution, the full stop at the end of a headline was one of the tell-tale signs of advertising.

The full stop in the digital world

We’ve just learnt that the headline for your next advertisement should, by convention, have a full stop at the end. In professional advertising, rarely, if ever – as we’ll soon see – are other punctuation marks used, like the exclamation mark or ellipses.

Headlines for a blog post or a brochure section  are, however, often similar to those found in journalism or publishing, and don’t require any punctuation at the end. And it goes without saying that in either case, be it advertising or editorial content, if the headline contains a question, it should end with a question mark.

For years now email, text messages and, above all, instant messaging have accustomed us to a less syntactic and more emotional use of punctuation: increasingly, punctuation is used to express emotions rather than to clarify the logical and syntactical structure of a written text. While until recently writing was used to build relationships through a non-instantaneous medium – in other words, the printed page of a newspaper, book, poster, flyer or magazine – today it’s evolving towards a sort of written orality that has almost the same immediacy as a chat with a friend. That’s why full stops, exclamation marks and ellipses are increasingly replacing facial expressions and hand gestures: they provide information on how an interlocutor should interpret our words in the absence of the visual and audio signals typical of a chat. And it’s the full stop that has undergone the biggest evolution: ending a WhatsApp or Messenger chat with a full stop is no longer considered a neutral action that simply indicates the end of the sentence. Rather, it has come to be interpreted as a sign of irritation, sarcasm, coldness or displeasure. In other words, in these contexts the full stop has become an expression of emotion.

That’s why in the post-digital revolution world, we often come across both approaches: on the one hand, there are professionals who continue with the traditional use of the full stop, even when they’re working on purely digital projects, like creating content for a brands. On the other hand, there are professionals who deliberately avoid using it, even for print ads and posters. Between these two extremes are many shades of grey. A common sense approach is, therefore, to decide on a case-by-case basis, avoiding dogmatism and thinking about what best suits the target audience of the text.

Exclamation mark or ellipses. Yes or no?

In professional communication, the exclamation mark and ellipses should be used with caution. Using them for emphasis in the first instance, or for surprise in the second, is a bit like adding additives to a liquor because you can’t achieve the desired flavour through aging. In other words: if the exclamation mark is the only part of your title that provides emphasis, you’ve not chosen the right words.

The same goes for ellipses, especially if used to tee up a second part of a sentence that is supposed to wrong foot the reader. In reality, they ruin the surprise, precisely because they telegraph it. It’s as if a comedian were to warn the audience that he was going to make a joke before doing so. 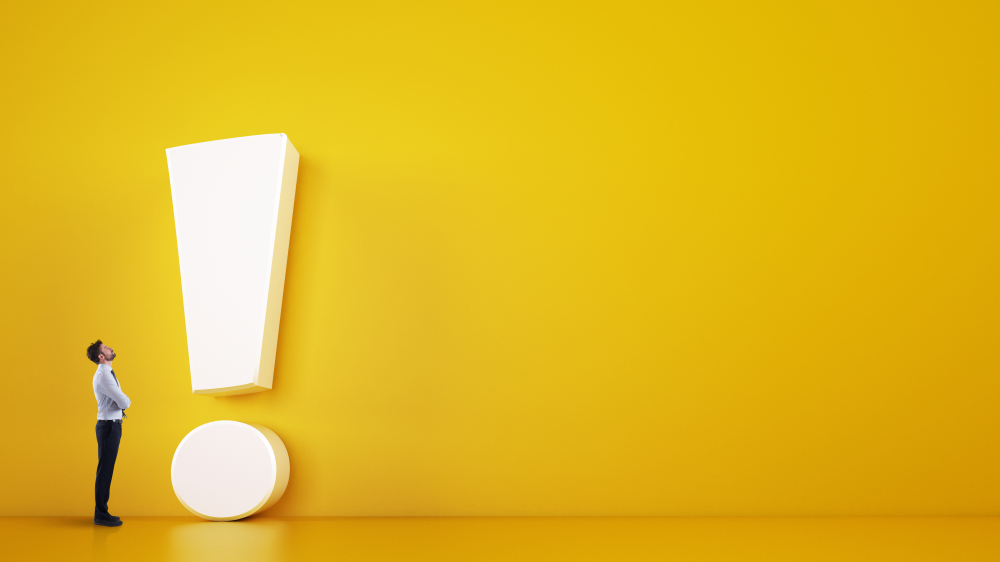 Of course, in a digital environment, especially when it comes to brand content for Facebook pages or Instagram and Twitter profiles, the emotional approach to writing has led to increasing use of these types of punctuation, which are viewed with much suspicion by those working in more traditional advertising. So if you want to use them, keep this in mind: never use more than one exclamation mark, and never use more or less than three points of ellipses. These aren’t just random dots, but part of a unique codified punctuation mark. Indeed, you might have noticed that when you type three full stops into your word processing program, it will automatically correct and turn them into the right sign by slightly changing their size and the distance between them.

And do you need a capital letter after an ellipsis or not?
Lower case is correct if you intend to continue the sentence that you interrupted, whereas upper case is preferable to indicate a marked change in meaning.

We now come to inverted commas and parentheses. Let’s start with the latter: why put a word in inverted commas? This is often done to highlight another meaning of a word used in a creative way. But putting that word in inverted commas is essentially saying we don’t trust the reader to understand. As in the case of ellipses, the surprise is ruined by the writer’s anxiety to make sure he or she is understood. Take, for example, the following headline:

The curse of the visually impaired is to live in a blind world.

It was written by copywriter Roberta Sollazzi for a classic advertisement that encouraged people to adopt more considerate behaviour towards the visually impaired. The accompanying image showed a poorly parked SUV blocking a pavement. The power of this sentence obviously lies in the fact that the term “blind” is used in broader sense to mean a moral deficiency rather than a physical one. The people who are really blind, the ad is saying, are those who can see but, out of laziness, pretend not to see that our lack of consideration for others can have regrettable consequences. Now let’s imagine the headline were written another way: 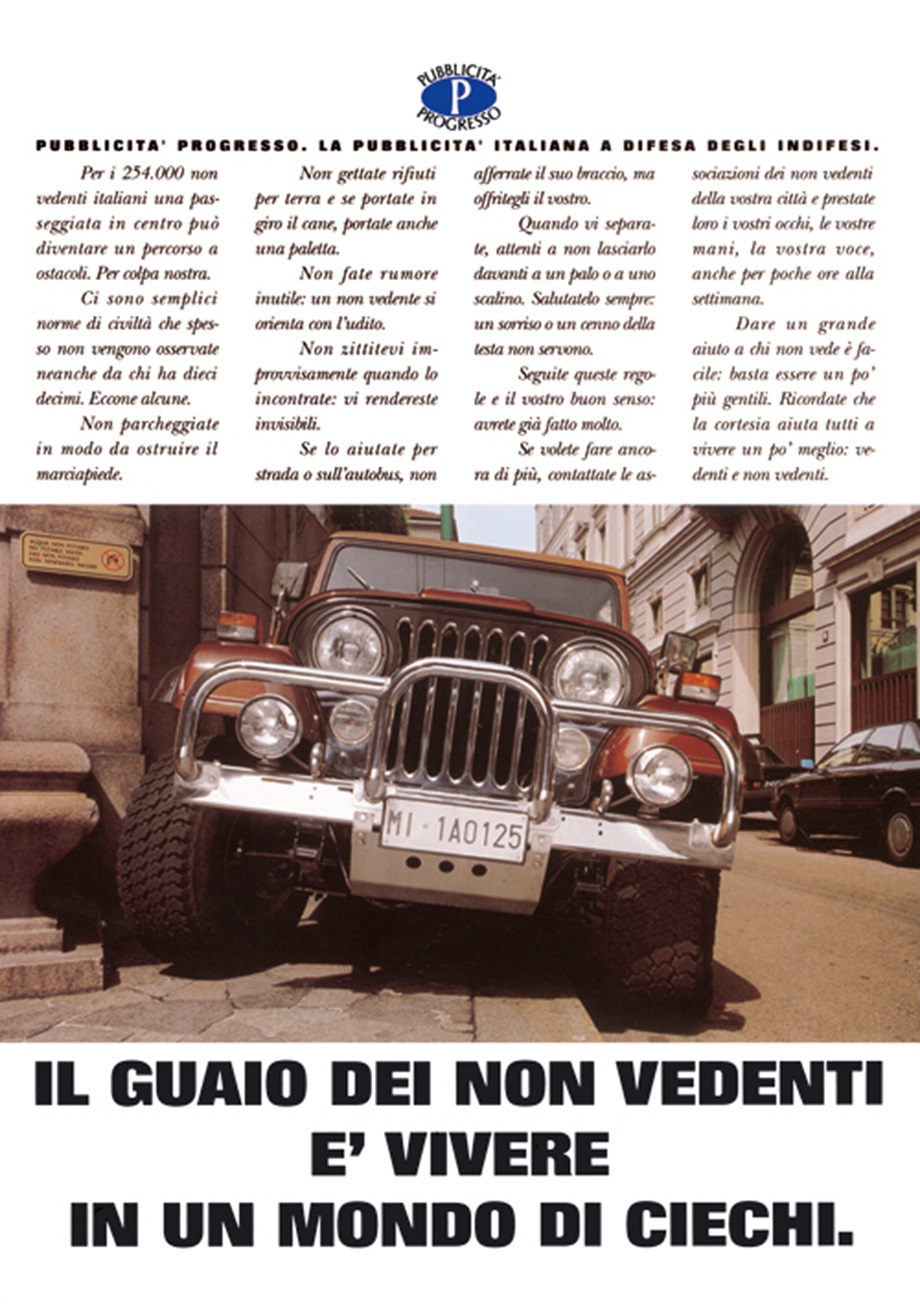 Once rarely used in professional copywriting, today parentheses are surprisingly widespread. In newsletters, blog titles and even digital content for social media, we often read headlines written like this:

Seven things that you (really) should know about punctuation

It’s a rather forced use of parentheses that somewhat stretches what sticklers for grammar consider to be correct usage: to insert complementary or explanatory information into a sentence. The main reason for its widespread use in headlines is simple: in digital contexts, copywriters are engaged in a constant struggle for the attention of distracted readers. Parentheses in headlines are just another device for catching the eye of the reader, making them think and piquing their interest in the hope that they will read on. So: should or shouldn’t you use parentheses? That’s the (nice) dilemma which we’ll leave you with today.