HOW TO CREATE MANGA-STYLE CARTOONS, FROM PAGE TO PRINTING

Manga is the Japanese word for comics: it was coined by various artists in the late nineteenth century, including the master Japanese painter and engraver Hokusai, to indicate collections of fun and accessible drawings and illustrations.

However, manga only gained widespread appeal after the end of the Second World War. The US troops introduced Disney comics like Mickey Mouse and Donald Duck to Japan, and it was partly this that inspired the modern manga by master artist Osamu Tezuka, the ‘God of Manga’ and creator of the famous Astro Boy series and lots of other iconic stories.

Today manga is one of the Japanese publishing industry’s biggest sellers, and for some time it has also been popular internationally, including in Europe.

Huge numbers of artists and aspiring cartoonists have already turned to Pixartprinting to print their stories or create an eye-catching portfolio of manga drawings.

Many people think of manga as a style of drawing and graphic design, but there’s more to it than that: it actually comprises a series of precise techniques.

An Eastern approach to comics

As we stressed in our article dedicated to bande dessinée, comics are not the same the world over: the forms of storytelling, drawing styles, page formats, book sizes and pagination all vary depending on their geographical area and culture.

While generally American comics favour action, colour strips and a portrait format, and in France the stories are published in hardback and with larger illustrations, there are two key elements relating to the narrative and page size that set manga apart:

This is our guide to creating manga-style comics: a vast topic that for many authors requires years of study. We are not claiming to be able to teach you everything – we simply hope to provide an introduction for those thinking about turning their passion into a job, or for readers who want to gain a better understanding of the concepts underpinning manga and the Eastern approach to comics.

Salvatore Pascarella: our guide to the world of manga

How do you create a manga comic if, say, you’re putting together a portfolio to show publishers, or simply self-publishing your work?

Before starting with the actual drawing, it’s important to understand that any form of cartooning is underpinned by deep foundations and visual grammars that reflect its culture of origin. Of course, these rules are not set in stone – they are simply guidelines that have developed naturally over time, sometimes due to the choices made regarding page layout and narrative time by particular authors.

To help us get to grips with the vast world of manga, we spoke to Salvatore Pascarella, pen name Salvatore Nives, an Italian mangaka and the author of the two-volume manga series Flame-Zero (published in France by EditionsH2T and Shockdom in Italy) and its four-volume sequel Flare-Levium.

The grammar and basic premises of manga

The individual parts that make up a comic are the same all over the world:

Manga has become an international phenomenon: readers are no longer limited to Japanese exports, as more and more European publishers and authors are also picking up this artistic technique.

According to Salvatore Pascarella, the basic Eastern narrative structure Kishōtenketsu is the starting point all manga authors use to create both two-page spreads (everything readers see when they open the book at any given place) and the stories as a whole:

“Mangakas always divide their work into four different stages: beginning, middle, climax and end, unlike western storytelling, which is only divided into three: beginning, middle and end. The Japanese also use this four-way division on individual pages. This is what Tezuka did at the beginning of his work New Treasure island: he took the four stages typically seen in yonkoma (vertical strips of four panels) and combined them with his research into Disney’s film-making, seeking innovation both in his direction and in his use of time“.

Countless authors have influenced and developed manga over the years, and it would be impossible to mention them all. Here are a few that definitely had an impact:

This list is a good starting point if you want to get to grips with manga’s underlying structures. But don’t limit yourself to the ‘masters’ of the art: take a look at some recent publications too.

The constituent elements of manga

To create a page of manga you first need to know some of its most common characteristics.

There are certainly a huge number of distinctive elements that set manga apart from Western comics. As well as Kishōtenketsu, which underpins the narrative, Pascarella also highlights  some more obvious differences:

Basically, in manga the page layout and structure are governed by the emotions that the author wishes to convey, as well as a narrative structure that seeks to maintain the interest of the reader.

The manga page and the finished product

Over time, manga has developed an extremely ‘free-form‘ grid: authors can overlap panels, make them bigger or smaller, and much more. In general, however, the books are structured as follows:

Naturally, these are general rules, and every publisher (both in Japan and Europe) has its own grid and number of pages. Some Italian authors, for example, use a 100-130 page format: a lot depends on the story you wish to tell.

But how is the drawing sheet laid out? Here, too, there isn’t a universal standard, but in general “there’s a grid that delimits the boxed panels and text, then there’s the outer margin for full bleed drawings/panels“, Pascarella says.

When it comes to the format, many use B4 (while others use the better-known A4). Here’s how to interpret the image below:

IMMAGINE-5: An example of a manga grid. 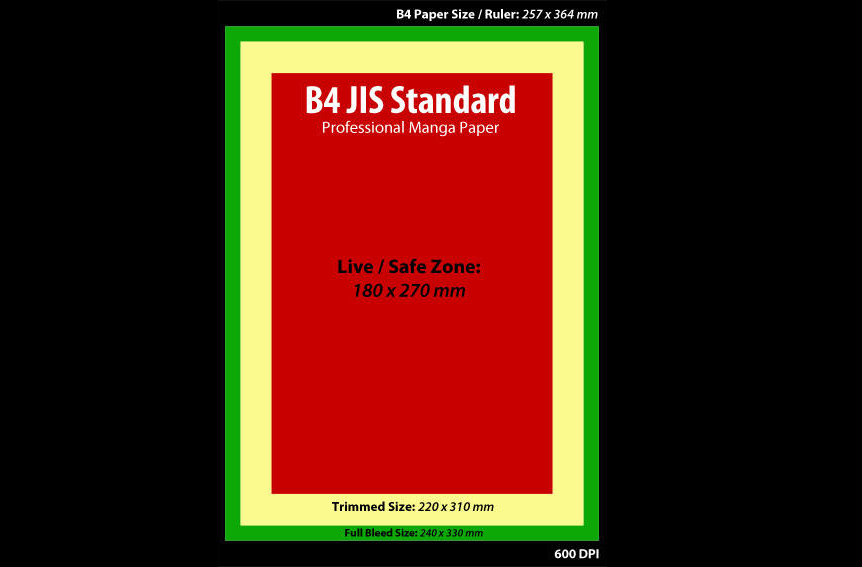 You can therefore draw in the yellow zone, but it is best not to add anything essential to the story (dialogue, for example) because it could end up too close to the centre fold.

The finished product is usually printed in black and white, traditionally in a 13 x 18 cm format (but many other sizes are also used). With Pixartprinting you can choose various formats in the books, magazines and catalogues section, including paperback books. If, however, you want to create a portfolio of panels or drawings, the best options would be perfect binding or stapled binding.

We’ve come to the end of this introduction to the boundless world of manga: our main advice is simply to read as many authors and stories as possible from this great tradition to get a deep understanding of the structures and storytelling techniques. And, of course, you’ll discover some riveting new stories at the same time.