Headlines, taglines and claims: how to tell them apart

Over the years, various forms of short text have emerged in the advertising world, which have then become established and taken on very precise roles. Sometimes, however, misunderstandings arise, even among professionals, because there isn’t always complete consistency in the terminology used to describe these types of text.

What’s more, the digital revolution has caused confusion around the meaning of the word “headline”. Everyday language is often confused with the terminology used by professionals, creating further misunderstanding. In this article, we’ll try to clear things up and give readers some more useful definitions. 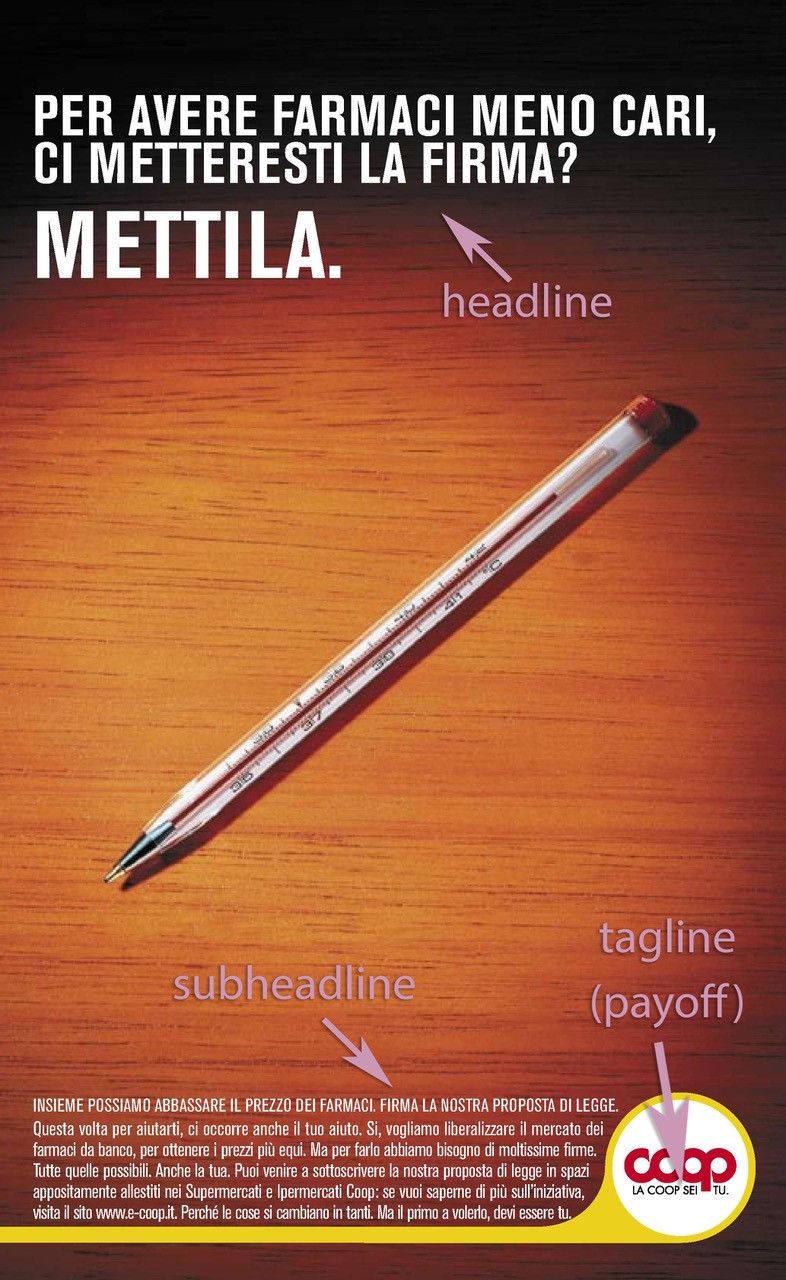 The headline. One, none or many

In the context of modern communication, the headline has gone through many identity crises. Today, we must recognise that, in the marketing world, there are several types of headline, which differ from one another in important ways. Let’s take a closer look at the two main types.

It’s perhaps the quintessential headline: the oldest, with the clearest identity. It’s the headline for an ad campaign for print or poster. Unlike a newspaper headline or a book title, it’s traditionally written with a full stop at the end. The reasoning behind this stylistic choice provides us with a vital clue to understanding this particular type of text. The ad headline – despite what those who don’t work in the profession often think – is not a standalone headline that “sounds good” or is particularly “catchy”. To tell the truth, it’s not even a real headline. Rather it’s a phrase, often incomplete and not fully comprehensible if not read together with another, which is all visual: in other words, the image on the page or poster. That’s why, as we said before, the ad headline traditionally needs a full stop. It’s not the title of a record or novel, but a sentence that is completed by an image.

If I were to write, “There are some ideas we want every company to copy”, I wouldn’t be saying anything meaningful or catchy. Yet this is the headline from a great Apple newspaper ad that can only be understood by looking at the accompanying image: a solar panel array stretching into the distance. With this simple combination of headline and image, the reader gets the ironic message: perhaps Apple’s competitors can’t match its commitment to renewable energy.

A clarification, to avoid any misunderstanding: the headline works over the short term and changes from page to page, poster to poster. It’s not a phrase that’s associated with the brand, but simply the headline for this or that message. So, a brand like Nike, for example, can have “Just do it.” as a tagline (which we’ll learn more about shortly) while creating very different headlines from one ad to another, like: “Michael Jordan 1 – Isaac Newton 0” or “It’s only a crazy dream until you do it.”

In reality, this category contains a wide range of subcategories. But for the purposes of this brief guide to terminology, you just need to know that the many forms of headlines for digital content differ from ad headlines for an obvious reason: they are not read with reference to an image. Of course, in the headline for an article on LinkedIn, for example, there may be an image. But we don’t find the same headline-image connection as we do in ad pages. The relationship is more akin to that which has always been found journalism.

The headline is in itself enough and, when well written, entices people to read the article, newsletter or Facebook post. Here, the image serves to catch the eye and, sometimes, back up what the headline and body copy say. This type of headline, which includes all those in this article, does not have a full stop.

Subheadline (or subhead). A bridge to the body copy

There may or may not be a subheadline on a printed page or poster. When there is, its job is serve as a link between the promise made in the creative part of the message and the more rational and explanatory part. It can be considered as the headline that introduces the body copy.

The tagline. A world of few words

What is a tagline? It’s a piece of text that is very different to the headline and plays a much broader role: it’s the phrase that positions the brand in the market and that, combined with the brand name, is the cornerstone of the brand identity. It communicates personality, style, tone of voice, and values. All this in just a few words. Some taglines last for decades and make brands memorable.

Nike. Just do it.

While the headline relates to the visual for an individual campaign, the tagline is associated with the corporate name and can be applied across the brand’s ads and marketing actions, sometimes for many years. It’s a component that doesn’t change and works over the long term. 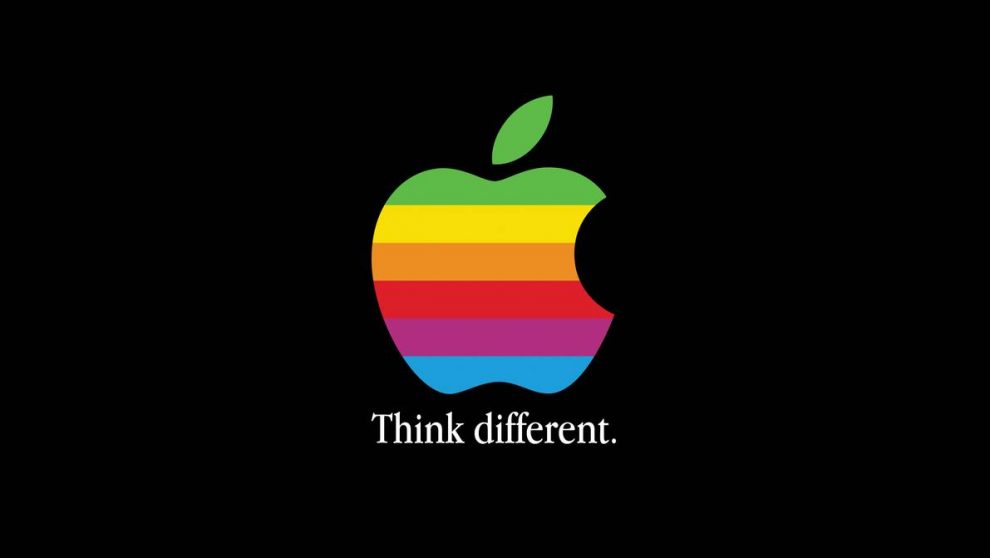 The claim. A campaign tagline.

It’s perhaps the text that’s most elusive and undefinable of them all. Some professionals consider it synonymous with the headline, while for others it’s almost the same thing as the tagline. Maybe the simplest and clearest definition is this: the claim is the tagline for a multi-subject campaign. So, what exactly does this mean? In some cases, a brand may decide to create an ad campaign with more than one subject. Each subject might have a specific headline, while below the logo we’ll find the usual tagline that positions the brand. But to connect each individual subject together with a single thread, a short piece of text can be used. This is the claim, which explains the concept of the campaign and, like an umbrella, covers all the different creative avenues emanating from the same idea. In this amusing campaign for Cafi Aspirina, for example, we can read three different headlines. The short text that appears next to the brand says: If it gets stronger, we get stronger. This isn’t the tagline for Bayer, but a claim that explains the concept that the campaign wants to get across, and which is the underlying creative idea. In fact, Bayer’s tagline is Science for a better life. But it rarely appears on marketing material. 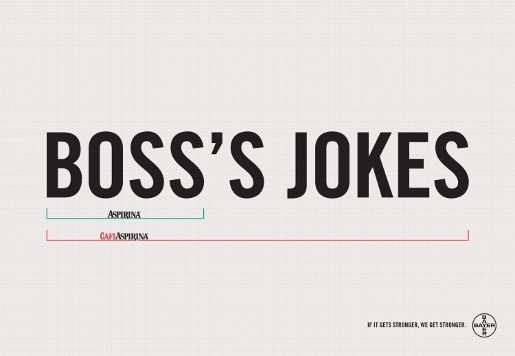 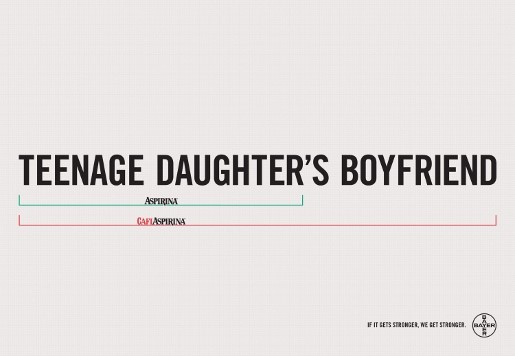 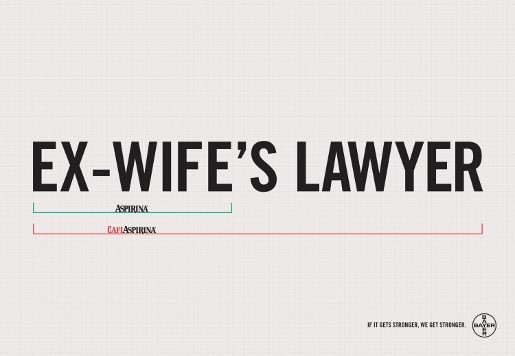 The slogan. Does it really exist?

We conclude our deep dive into the terminology used for short texts in advertising with one of the most well-known terms. Slogan is thought to derive from the Gaelic for “war cry”. In everyday language, it is used to refer to a memorable and catchy motto, be it from an advertisement or the world of politics. Often, those outside the industry use slogan to refer to the tagline, claim or even headline. That’s why, in professional contexts, the word slogan is often avoided. Rarely in a multinational advertising agency will you hear a creative director say: We need to improve the slogan.

So, ironically, the most well-known advertising term is one that is not often used by professionals, who, to avoid possible misunderstanding, prefer to use the other terms explained in this article.